Tony Cingrani, The One Pitch Starter?

We are introduced to players in different ways. It may or may not be the first time we see them, but it is the first time we notice them. The time I was introduced to Tony Cingrani of the Cincinnati Reds was on the 27th of June in 2012 when he was pitching in AA against the Seattle Mariners affiliate. He struck out 15 batters, facing 25 in 8 innings. He did this with what was, according to the MiLB.TV broadcast, a 88-91 MPH fastball. Since then, Cingrani has broken into the big leagues and has had some MLB success in 33 innings. Since it is obviously a small sample size and there seemed to be tension or even a contradiction between his stuff and minor league numbers, I wanted to look at his MLB Pitch F/X data so far for his career and see if we can make sense of what Cingrani is and what he will be in the Majors.

First, let's take a look at what he is throwing: 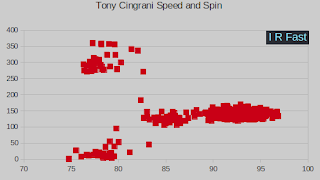 This suggests a fastball, a changeup, a curve (both a heavy spin and a non-spin one), and maybe a handful of sliders. Despite the reports of his minor league velocity above, Cingrani's fastball has the potential to flash plus, as he has thrown 35 fastballs over 95 MPH (he has thrown 625 Pitch F/X pitches). He isn't a soft tosser, and the speed and spin chart shows that he throws a lot of fastballs.

Cingrani's average release point is 5.88 vertically and 2.65 horizontally, which is closest to Jeff Francis and Jon Lester, and is one of the farthest out left-handed starters in the Pitch F/X period. Or in graph form, this is what Cingrani's release point looks like: 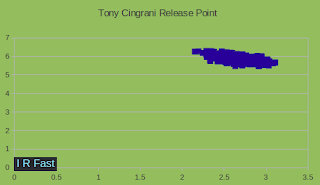 Lester doesn't have much platoon splits for his career, but Francis has always had large ones. Of course, there is a big difference in fastballs between Francis and Lester. Francis is a soft tosser, while Lester has a plus fastball. Cingrani seems to fit closer to Lester, at least showing off a good fastball (not saying Cingrani is Jon Lester obviously, just that his fastball is much closer to Lester's than Francis'). However, let's see if Cingrani's strike zone against righties reveals any tendencies. 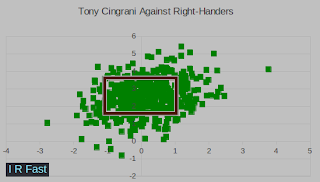 It doesn't really. He throws more pitches away, which makes some sense no matter what the pitcher or platoon, but it isn't a heavy distinction, and there doesn't seem to be any notable tendencies up or down. The heavy usage of fastballs by Cingrani is what is really interesting to me.

It is tough to tell his slowest fastballs from his harder changeups, which isn't an uncommon problem, but using the rough cutoff the MLBAM tags take, about 88 MPH (that is, what is slower is a changeup and what is harder is a fastball), we get 103 non-fastball pitches. Out of those pitches, he has 10 swinging strikes, and 14 balls put in play (including home runs). It seems that the softer the pitch, the curve, and maybe a slider, have been more effective, meaning that his change hasn't been very effective. Compare this to his 58 whiffs with his fastball in the 522 pitches he has thrown. This means he has a higher whiff percentage on his fastball than he does his off-speed and breaking pitches. This is pretty unusual. In the Pitch F/X era, the best whiff fastball for starting pitchers has a 32.12 whiff/swing percentage (13.4 whiff percentage), while the best whiff curve has a 49.62 whiff/swing percentage (20.96 whiff percentage) and the best whiff change has a 54.07 whiff/swing percentage (28.96 whiff percentage, this data according to Baseball Prospectus' Pitch F/X leaderboards). So Cingrani's successful fastball but unsuccessful off-speed pitches is a little bizarre. But is it a problem? There are two ways to approach this. To have success in the big leagues, it is common knowledge that you must "establish your fastball" and when you have a plus fastball like Cingrani, you have a chance to have real success in the Majors. However, to be a good starter and to get hitters out the third time through the order, you usually have to show MLB hitters something else. Let's look at how Cingrani is using and locating those pitches so far: 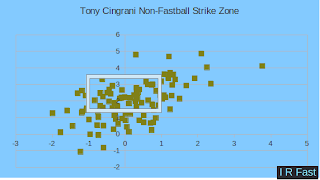 He is mostly doing a good job of keeping the ball low, but he doesn't really get in on righties or get it very far away from lefties. He also seems to be having some kind of problem finishing his delivery with these pitches, leaving a lot of them up and arm side.

Since he seems to be a strikeout pitcher (with a very high strikeout total throughout the minors and in the Majors in his small sample size), I wanted to see his breakdown of pitches with two strikes, how he tries to finish hitters. Using his spin and speed chart with two strikes: 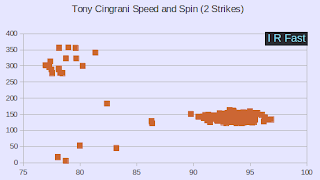 We see that he basically goes to just his fastball with two strikes. He doesn't throw hardly any changeups, and not a significant amount of curves. He goes to his best pitch, which is his fastball. But enough about selection, let's look at location: 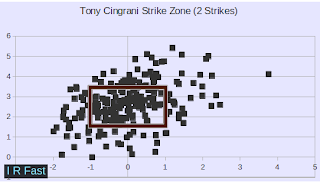 Here, we see he does a better job of throwing the ball towards the right-handed batters box, and (along with the pitches that appear to be armside misses) he seems to throw more intention high pitches, which isn't surprising since he throws mainly fastballs. Again, this is very unusual when looking at elite strikeout pitchers, as Justin Verlander's fastball usage drops 12%, Yu Darvish's 6%, and Matt Harvey 6% as well. We simply do not see starting pitchers start throwing even more fastballs with 2 strikes.

The heavy fastball usage makes questions about whether he can stick as a successful starting pitcher legitimate, and may prompt a move to the bullpen, where one could imagine he would become very successful. With 2 strikes, some elite strikeout relievers don't go away from their fastballs, as Papelbon throws it just 1% less, while Fernando Rodney throws it 9% more, (David Robertson throws it 9% less, and Tom Wilhelmsen 10 % less).
Posted by Unknown at 9:42 PM