The Toronto Blue Jays turned to 23 year old lefty Sean Nolin to make a spot start for the big league team earlier in the week. A 6th round pick in 2010 out of college, Nolin was ranked as the Jays 19th best prospect by Baseball America to start the year, and 9th in the system by FanGraphs' Marc Hulet. His big league debut didn't go well, to say the least, as he recorded just 4 outs, striking out none, and gave up 6 runs.

Nolin is a large pitcher, listed at 6-5, 235. Here is his release point, along with all the locations of his pitches:

Nolin's average release point is probably closest to Joe Saunders (Mark Hendrickson and Clayton Kershaw are sort of close). He definitely had some problems repeating it in his outing, mainly in a horizontal way, probably meaning he was standing on the rubber slightly different for some of the outing (in the homer we will look at below, we will see that he is standing in the center of the rubber). The height seems fine, so I don't think it is a huge concern. What does seem concerning is how much he threw the ball arm side. When he did go glove side, it was almost always way off the plate. Using the MLBAM tags, here is what his average strike zone looks like:

The slider and cutter were thrown arm side (as they usually are), but everything else is pretty extreme arm side. We are using the MLBAM tags for him in this post, but as his spin and speed chart shows, they are demonstrably wrong on some pitches:

There seems to be some confusion between the slider and the cutter, and whether he has a changeup or a moving fastball (at that velocity difference, especially with it being that demonstrably separated, it almost has to be a change).

Obviously he was hit around in his start, so let's look at his locations on pitches that were hit for hits or run scoring plays (technically the in play, no outs designation and the in play, runs designation):

The two well located curves are interesting and raise some questions. One was a single, which could be luck, while the other one was a home run, which is a little less likely to be the result of randomness or luck. The homer was given up to right-handed hitter J.J. Hardy, who isn't especially good at hitting balls low, but is good at hitting breaking balls low, at least much better than league average. You can see the homer here, it was on an 0-2 count and the pitch was nearly in the dirt, and Hardy somehow manages to pull it for a homer. At 74 MPH (most likely about 72 MPH in Toronto), it isn't especially slow, but maybe slow enough to adjust to.

Mechanically, Nolin uses a pretty high leg kick to try to hide the ball, doesn't have great posture at time of delivery, not really twisting his back, but appearing to be very low and not upright. His arm angle comes up above his body, like this: 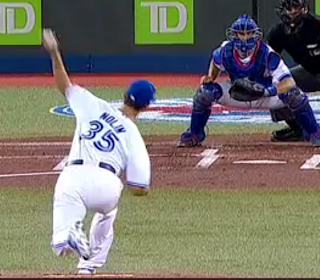 One would think that this negates anything the leg kick does (other than just making it a timing device) in providing deception, as it seems like he lets hitters see the ball more than a traditional delivery would. The head tilt is obvious, perhaps why he pulled a few of the balls, but again he threw mainly arm side, suggesting he was having more of a problem finishing his delivery.

The first conclusion is pretty obvious, Nolin wasn't ready for the big leagues and probably shouldn't have started that game. If we adjust for Toronto's apparent velocity friendly radar gun, his fastball seems to be a little below average, with some kind of cutter/slider, a change, and a curve that apparently isn't very effective. It can be tricky to make pronouncements on a player's future based on the data of one bad game, but the stuff looks pretty vanilla overall. Perhaps Nolin can be a back end starter in the somewhat near future, but he doesn't look like a real impact starting pitcher.