On May 11th, two good college sophomore pitchers pitched against each other, left-handed Carlos Rodon for NC State and right-handed Luke Weaver for Florida State. The two are draft prospects to watch for 2014, with Rodon being a significantly higher rated prospect than Weaver in preseason rankings. The game had a broadcast gun, so I logged the velocities of each of the starting pitchers. 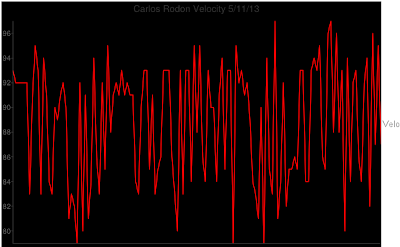 Fastball: 88-97 MPH, 92.52 MPH average. The closest left-handed comparison according to MLBAM tags in the Pitch F/X era seems to be Brett Anderson, who has been an ace at times when healthy.

It seemed like Rodon threw a slider and a change, though it was often hard to tell which was which. He also didn't throw a traditional curve, just like we saw with Mark Appel, which seems very odd to me. To avoid classification problems, I just combined the two pitches, and we can compare it to sliders and changes.

79-88 MPH, 83.66 MPH. His closest comparison as a left-handed change is Madison Bumgarner, and the closest comparison as a slider is Mike Minor (slower than Bumgarner's). It is slightly harder than Minor's change, but it is really close (Minor's fastball is over 2 MPH slower than the one Rodon showed). Brett Anderson's slider is softer than Rodon's off-speed pitches in total, but his change is slightly higher.

Luke Weaver for Florida State was an 19th round pick out of high school. Here is his velocity chart from the game: 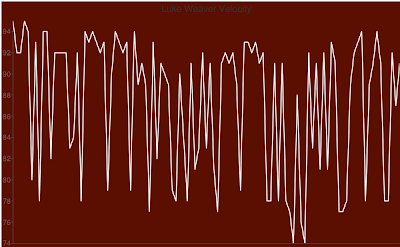 Fastball: 87-95 MPH, with a 91.83 MPH average. Out of qualified starters in the Majors in the Pitch F/X era, Weaver's closest fastball comparison is Matt Cain or Kyle Davies, both pitchers who had some success in the Majors, though obviously to differing degrees. Both could also max out over 95 MPH (though Davies hasn't pitched in the Majors in a couple years, and Cain hasn't done it in a couple of years). Weaver's fastball had some two seam type movement, that he especially used to come back over the plate on the away from righties part of the plate.

He seemed to feature what looked like a soft slider/hard curve along with a changeup that didn't move very traditionally. Combined, those pitches averaged 79.16 MPH. Separating them, because of the weird movement, was a little difficult, but because the breaking ball was significantly slower than the change on average, I am calling it a curve. I have him with:

Rodon is obviously the better prospect, with both a handedness advantage, a size advantage, and a better fastball. However, Weaver has a big league fastball as well, and a more traditional curveball, and has been drafted before, so he is a MLB draft prospect for the 2014 season as well.