Why are some soft-tossing lefties successful and others not?

When evaluating pitching prospects, fastball velocity is usually the best starting point. However, the minors are littered with soft tossing left-handed pitchers, a lot of them with good statistics. The Majors also have several left-handed pitchers with below average velocity that are enjoying quite a bit of success at the Major League level. I wondered if, by using Pitch F/X data, we can find any clues as to why some of these pitchers fail, while some of them succeed in the Majors.

So I looked at left-handed pitchers from 2007-2013 with at least 150 starter innings and a fastball between 87-89 MPH according to MLBAM tags, thus getting below average velocity pitchers, but not dealing with extremes like Mark Buerhle.

For a cut-off for which pitchers were successful, I considered ver 110 FIP not successful, under is successful. Obviously 110 is 10 percent below league average, and some comparisons of what that kind of pitcher that is statistically, Bud Norris, Ivan Nova, Phil Hughes, and Derek Holland in 2012 were near that mark. Basically guys that can fit into a rotation, but aren't what you would call excellent pitchers or even average. Jarrod Washburn and Nate Robertson were right at it, and I considered them successful.

In order to cut down on the brute amount of data to analyze, I pulled the start (if it was a Pitch F/X start) that was closest to each pitcher's career FIP, so for example, Rich Hill has a career 4.47 FIP, I pulled his 6/12/07 start, which had a 4.46 FIP.

It should be noted that none of them are even close to what you would call aces (there may not be a number 2 in the group either), and just a few of them were above average. However, the successful ones are pitchers that have some kind of value.

Let's start with the basics:

I figured it had something to do with release point:
Vertical: 6.19
Horizontal: 1.98 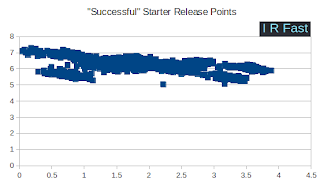 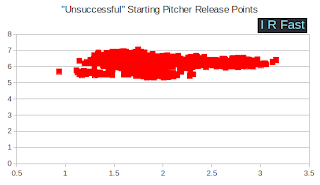 So really, we see no difference in release point or general location between the "successful" and "unsuccessful" pitchers. That is, there are no easy answers, at least they don't lie in what I thought would be obvious differentiators.

To look at pitches, we unfortunately have to use MLBAM tags here. So be sure to keep in mind that there has to be a decent margin for error here. When I think of lefties with below average fastballs, I usually think about curveballs or changeups, so I looked at those pitches for each group:

So we see that the "successful" lefties use their curves more, and while it has basically the same spin, their curves have a little bit better vertical depth and actually worse velocity.

So the unsuccessful pitchers actually have better movement on their changeups, along with slightly better velocity. However, they also use it a lot more, which makes me wonder if they overuse it. Out of those 229 changeups, 32 of them were for whiffs, well above average in swinging strike percentage. Compare this to the just 15 whiffs the successful pitchers got on their changeups. Weirdly (perhaps just because of the selective nature of the sample), the unsuccessful pitchers had a little bit better whiff percentage (7.5% versus 6.14%, both well below average). When you take out the changeups, the successful lefties have a very slightly better whiff percentage (5.51 % versus 5.75%).

Perhaps the changeup is what brought the unsuccessful pitchers to the majors, and as we have seen, when pitchers are known for having elite changeups coming up, that doesn't mean that the pitchers will have any kind of MLB success. While the pitch can be important to neutralize righties (for lefty pitcher), the fastball and curveball is more important. This is why the successful pitchers throwing their curves more and having better movement on the pitch seems meaningful (though it is strange that they are softer). Unsuccessful lefties got 6 whiffs with their curves, while the successful lefties got 13 whiffs with their curves in our sample.

Other than the curveball/changeup distinction, using the data I used, I can't find a clear difference between soft-tossing lefties that have success in the Majors in starting roles, and ones that do not have success in starting roles. There are some things that are somewhat hard to measure using the data we have, such as sequencing, overall deception, and (because of pitch classification issues) fastball movement.

The best we can do with sequencing (trying to keep hitters off balance by using different pitches and fooling them) is look at which pitches they used with 2 strikes. With 2 strikes, unsuccessful lefties threw 33 sliders, some kind of fastball 126 times, 14 curveballs, and 46 changeups. Successful lefties threw 51 changeups, 49 curveballs, some kind of fastballs 173 times, and 62 sliders. Again, the big difference is the changeups versus curveballs.
Posted by Unknown at 11:31 PM