Evaluating Mark Buerhle, Past and Future

Mark Buerhle has been the 19th most valuable pitcher in baseball since the start of the Pitch F/X era (2007) according to FanGraphs' WAR. He has done this despite having one of the worst fastballs in baseball (the worst qualified fastball in 2012). In a previous post, I tried to see why some soft-tossing lefties were successful in the Majors. Here, I will take a look at Mark Buerhle, and consider it a case study, as we try to unlock the puzzle and contradiction of Buerhle. He is not a high strikeout guy, relying on groundballs instead, and his own fielding abilities to help him "outperform" his DIPs. I am not so much as interested in why he has a 3.88 ERA since 2007, but why he has a 4.18 FIP (96 FIP -) since this time.

Let's start by looking at his Speed and spin chart 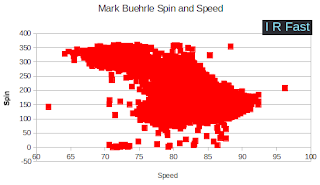 The speed and spin doesn't provide a lot of differences, but the movement data does suggest there are 3 different fastballs. The MLBAM tags are horrible and unhelpful, especially since they changed the way they classified fastballs in 2010. The Brooks Baseball tags are better (as they always are), but I am doing it my own simple way, but putting the high horizontal movement pitches as sinkers/moving fastballs, the low horizontal movement as regular fastballs, and negative movement pitches as cutters.

There also seems to be a separate slider as well, something that the Brooks/Pavidilis tags seem to ignore, or just call cutters. There is a big difference in both velocity and movement, along with spin, so I am saying he has a separate slider. You can't really classify sliders based on spin, so I used horizontal movement, the higher negative horizontal movement (that were clearly not curveballs) I labelled sliders, and the lower ones, the ones closer to 0, I labelled cutters.

So according to my classifications (I know a few pitches were cutoff, but this is almost all of the pitches that Mark Buerhle has thrown in games in the Pitch F/X era):

The fastball movement is pretty good horizontally, but it doesn't get a lot of vertical depth comparatively. The slider has really nice movement, and the curve is sort of average.

Here is what Buerhle's Release Point looks like in graph form: 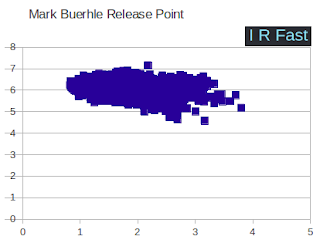 His averages are 6.11 vertically and 1.72 horizontal. So compared to the average soft-tossing lefty, he is a little more low, but not quite as far out when he delivers the ball. Buerhle's closest comparison is probably either Everett Teaford or Odalis Perez. Neither very attractive comparisons.

In 2013, Buehrle has been the second worse starting pitcher according to fWAR. Many believe that his style of pitching won't work in the AL East and cite his career numbers against the Yankees and Red Sox to back this up.

First, we should look at his 2013 outings, and see how his pitches have regressed overall.

So the differences, according to my tags, in Buerhle in 2013 and previous Buerhle seasons, is that his fastball has lost a couple more ticks, his moving fastball, slider, and cutter a half MPH, but that his changeup and curve have actually gained velocity, but lost some movement. This could be just classification errors, but the spin is the same for the two pitches, so maybe not. Eric Nehs of BIS points out that the gun at Toronto this year has been "hot", so perhaps this explains some of it.

Buerhle seems to be going to his 4-seam fastball a little more, and his cutter less. This doesn't even make sense in the context of this season, as he has given up contact 14 times with the pitch, 13 times for outs, and just one for not an out (though it was a run scoring play). It still seems to be an effective pitch, yet, he is throwing it less now. Compare this to his 4-seamer, which he has gotten 24 outs with on contact, and 10 hits/run scoring plays with. 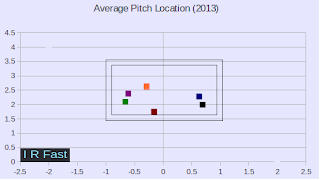 He is working glove side with everything except the moving fastball and the changeup. The 4-seam is the only pitch above the middle of the plate, with the slider moving closest away. Here are the average pitch locations for his career (starting in 2007 of course, also including 2013): 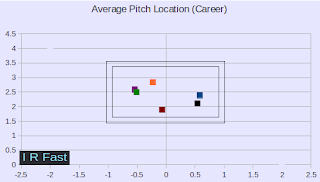 As you can see, his 4-seam fastball is actually higher for his career than in 2013 so far. So he isn't throwing more fastballs in the middle of the plate in 2013. The same 4 pitches are staying arm side or glove side, none of them have changed dramatically. Really everything is actually lower in 2013. I don't think this helps us any when it comes to why he is struggling in 2013, though perhaps it gives us some insight into how he is so successful. He keeps the ball low for the most part and uses 6 distinct looking pitches (I think the spin shows that there is a difference between a cutter and a slider) into three quadrants of the strike zone. He obviously has the ability to throw them all for strikes as well.

It also doesn't appear that his release point has anything to do with his struggles either, as his vertical release point this year is exactly at his career average, and his horizontal release point (near 1.5) is actually a little closer to the center of the plate.

So I really think we have three choices for Mark Buerhle's struggles so far in the American League East. The first is that it is mainly just small sample size. Even though he has had some really bad starts, and his BABIP doesn't work traditionally, we are in mid-May. It is still technically a small sample size. Secondly, maybe the stuff has finally regressed to where he can no longer have consistent success in the big leagues. Perhaps he could live at 86 MPH, but not 84 MPH. Or finally, maybe Buerhle could have success in other divisions in baseball, or in the NL, but pitching in the doubles friendly park at Fenway, or the homer friendly park in New York, or just facing those good lineups on a consistent basis just doesn't work for his stuff. Picking between the three would just be an educated guess, but the other indicators (there is no release point change, etc.) show that it is probably one (or a mixture) of these three.
Posted by Unknown at 12:56 AM