Jedd Gyorko made the San Diego Padres out of spring training as a bat first infielder. My odds system had him as the 11th best hitting prospect in AA or AAA last year, just behind Oscar Taveras (he was still in the top 70 after considering defense and baserunning). So far, he hasn't disappointed, with decent peripherals and good power numbers through a little more than a month and a half. In this post, I will look at what the pitch data says about him and whether we can expect continued success.

First, let's see where pitchers are throwing to him on average along with where he is having success: 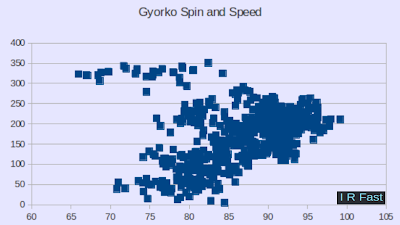 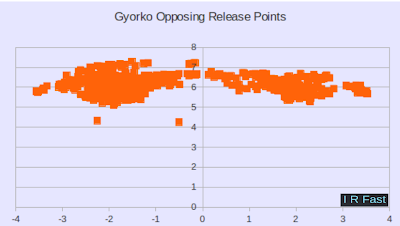 While his strikeout rate is about league average, his whiff percentage is above league average (suggesting that some kind of correction could be coming). Here are the pitches he has whiffed on: 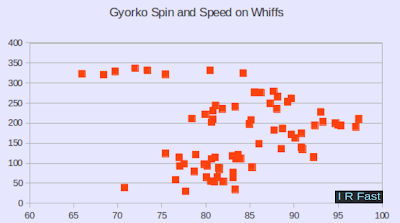 A pretty diverse mix here, some average fastballs, some plus fastballs, a lot of what looks like sliders or hard curves, a good amount of changeups, and some lefty high spin slow curves. Here are those pitchers' release points: 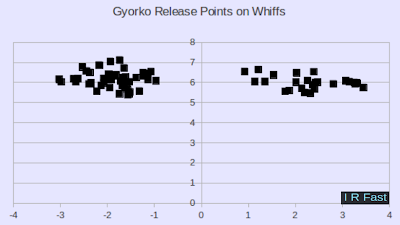 He hasn't swung and missed at any extreme righties, but has whiffed at a surprising amount of left-handed pitchers, especially the far out ones (perhaps because they are throwing so much off-speed and breaking pitches). He hasn't whiffed at any of the over the top pitchers or pitchers that are very close to the center of the rubber. How about on contact? Rather than distinguishing hits and outs (or even runs), I assumed they were the same for our purposes. Here are the pitches he has hit: 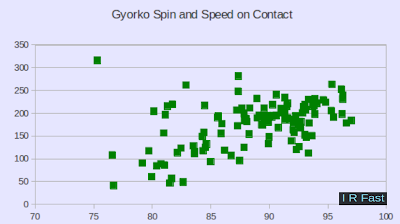 The big difference in this is the lack of slow curves hit, and the amount of fastballs, both plus and average is much more when it comes to contact than whiffs. When you look at his contact release points, he has made contact on a good amount of far out righties, some of the over the top pitchers, but not a ton of lefties: 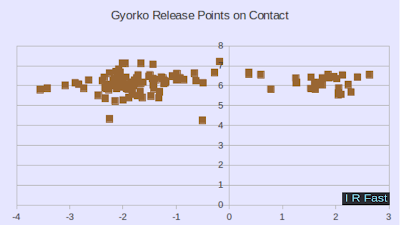 Obviously looking at splits at this point of the season isn't very helpful, but he has been a reverse splits guy by strikeouts so far (though power and BABIP is on the side of Gyorko against lefties). It may be helpful to look at how he is being pitched by lefties:

Similar to his overall strike zone, he is pitched low and outside, has success on inside pitches, and misses a lot of pitches low. That location is where you would expect curveballs to be, and as we saw above, he struggled with the high-spin left-handed curve. Luckily for Gyorko, not many pitchers in the majors throw a real slow curve, so his strikeout rate against lefties might be a little inflated and due to regress some.

Overall, Gyorko has shown that he has real MLB hitting abilities, handling the inside ball and good fastballs really well. Adjusting to the outside and low breaking ball has been a little bit of a struggle so far, and something he will need to improve on if he is going to be a consistent hitter in the big leagues.
Posted by Unknown at 10:39 AM