The Astros got Robbie Grossman in the Wandy Rodriguez deal with the Pittsburgh Pirates last year. He seemed to be the kind of hitter that some of the more sabermetric guys liked more than the traditional prospect guys because so much of his offensive value was tied to walks and his approach. My odds system ranked him 380th overall and 289th offensively, so even statistically there were some problems with him. The Astros brought him up towards the end of April and have been playing him every day, so I thought it would be a good idea to peek in at the 222 pitches he has seen according to Pitch F/X so far.

Here is his spray chart so far, according to Texas Leaguers:

Of course, Grossman is a switch hitter, so let's look at how he is being pitched by handedness. 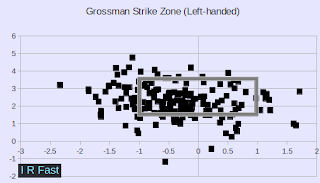 Just like what we saw in our look at how top hitters were pitched when they first came up, Grossman is being pitched away heavily, very rarely being thrown inside. Left-handed pitchers are doing basically the same thing to him, with nearly everything low and away: 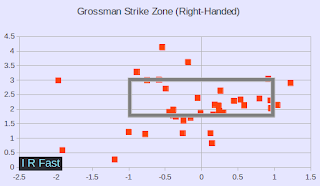 Obviously he is facing more right-handers (and is batting left-handed the majority of the time) than left-handers, as common sense and the strike zones show. This release point chart should give us an idea of the kind of pitchers he is facing: 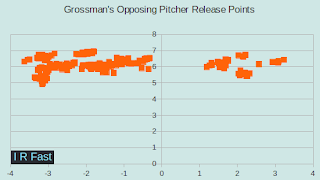 He is getting to face quite a bit amount of righties that come far out, but not necessarily low.

Grossman's average spin on whiffs is 166.83 degrees. His average spin on contact is 175.63 versus an average spin of 180.48 overall. So not surprisingly, the pitches he is missing have the least amount of spin, which usually means breaking balls. Surprisingly, his contact is on pitches with less spin than the average pitch overall, which would suggest he isn't hitting as many fastballs as you would expect by percentage. Here are the pitches Grossman has swung and missed at by release point, with a rounded version of the velocity:

Grossman has seen 13 pitches over 95 MPH (there are more on the chart because I considered anything for the chart 94.5 MPH or more to be 95 MPH, I am not doing that here) and swung at just 3 of them, one for a swinging strike, the other for a foul tip, and another for a ball put in play for an out. He has seen 60 above average (92 to 95 MPH basically) fastballs, and has put 8 in play versus 5 swinging strikes. Out of the 31 fastballs in the average range (90 to 92), Grossman has put 9 in play and not swung and missed at any of them. So actually, Grossman is clearly handling big league fastballs pretty well. It is slow pitches that are giving him problems so far, as out of the 24 pitches less than 80 MPH he has seen, he has swung and missed at 5, with just two put in play, both for outs.

So far, Grossman hasn't shown really any power in the Major League level. It is a small sample size, but there wasn't much power in the minors either, which is one of the reasons he was rated so low in the odds system. This means (especially since he isn't a speed or defense guy) he needs to be a high OBP guy and have a really advanced approach. The signs so far suggest that he is doing a decent job of laying off pitches far outside (as his contact and whiff percentages are closer to the center of the plate than the average location), but he has been a dead fastball hitter. He is going to have to do a better job of hitting the off-speed pitches if he has a true MLB future as a starter.