Reports are that the Brewers have offered Jean Segura a contract extension despite the fact that he has played just over 80 games in the Majors. Segura's baserunning has been excellent in the Majors, with his defense depending on which system you use (and it is a small sample size). Either way, he is an athletic middle infielder that has the value that comes from that, but what about his bat? Rather than trying to break down minor league or small sample statistics, I looked at his Pitch F/X data to see what pitches he is having success with, and what pitchers are trying to do with him so far.

Here are the release points of the pitchers Segura has faced so far in the Majors, along with the official result of the pitch. This should be sorted by MPH, so the faster pitches should be overlaid on top when there are layers (for maximum viewing, click on the photos)

Below is the Spin and Speed chart for the pitches he has seen. Unfortunately, this is just a picture version, and posting the interactive page inside the post always causes loading problems for me. So if you would like to see that version, where you can hover over the details of each pitch, feel free to do so here. If not, here is the image version:

For a more traditional look, here is Segura's strike zone with the pitches and results:

Segura has seen 106 pitches over 95 MPH, and swung and missed at 7 of them. He has put 8 in play for outs, and 6 for runs scoring plays or hits (technically, non out plays). So he seems to be handling top notch velocity well. As you can see, pitchers are pretty balanced with him, but they really like to jam him in. Via Texas Leaguers, let's look at his spray chart so far in the big leagues:

As you can see, he is very likely to pull the ball in the infield, but not to the outfield. Most of his power actually comes going the other way, which is why pitching in on him makes sense. Of course, Miller Park is a hitter friendly park (105 three year park factor, 115 so far this year) and it is too soon to believe that home/road splits have any validity, so using Katron.org, we can look at his home spray charts from year to year. Here was Segura at home in 2012: 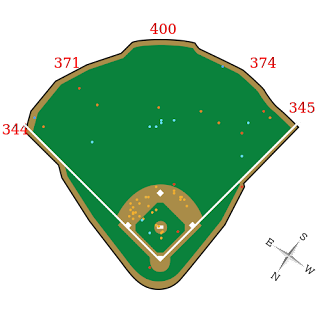 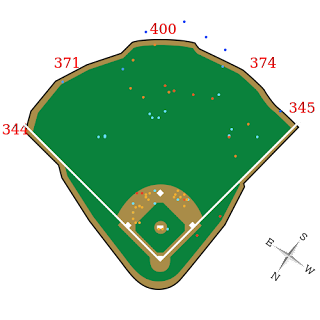 For a less cluttered look at Segura's strike zone, here are his average locations by result (I took out balls because the average ball was paradoxically in the strike zone, which obviously doesn't much sense from a visual standpoint)

Because of the lack of pull power, we can probably rule out Segura being a serious home run threat, though the strength to hit the ball out, and not just in Miller Park, the other way is surprising. Perhaps this will lead to power further down the road, especially since plus plus velocity is not a problem and he can hit balls that are up and in well. He seems to be a pretty balanced hitter, taking a lot of breaking balls, and putting a lot of balls in play against righties. I think there are a lot of reasons to believe in Segura's bat, and depending on what the club thinks about his defense, this is a guy that it would make sense to take a gamble on and keep around long term.
Posted by Unknown at 1:27 PM