How Japanese Imports Have Been Pitched

In previous posts, I looked at how some top prospects were pitched when they first came up, and tested a thesis on which separated why some were successful and some weren't. I wanted to see if we could quantify how good the scouting reports opposing teams had on players coming up from the minors. In the same vein, I wanted to see if the scouting reports teams have on NPB imports are very informative (or at least, whether or not they are being executed).

From best I can tell, there have been just 5 NPB hitters come to the MLB since the Pitch F/X era began, two of them have been really unsuccessful hitting shortstops, two had good starts but faded, and one is enjoying success in the Majors right now. We will start with him:

Norichika Aoki has been a nice player in the Majors so far, with a 3.7 WARP in 184 games and a 110 OPS +. However, the Brewers' submitted a bid of just 2.5 million for him, and knew so little about him that they made him go through a series of tryouts before signing him. 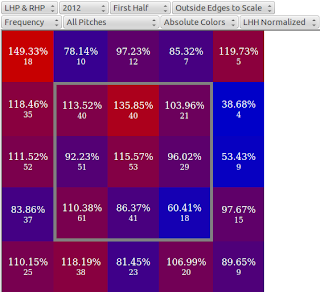 Teams threw him a ton of high pitches, going away from him far more than inside. Here are the zones with his TAVs so far, showing where he is having success: 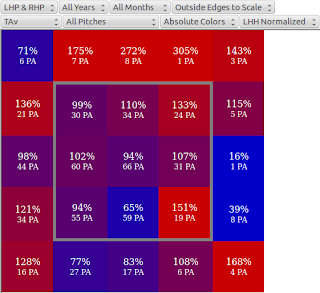 Inside is where he has had the most success, showing that teams were right to stay away from the low and in zone. However, he is better on high balls than low balls. Here is where he has been pitched in his entire MLB career: Teams have somewhat corrected now, throwing pretty much anywhere in the zone except the low and in zone.

Akinori Iwamura came over from the NPB and had two nice offensive years with Tampa, followed by a decent but shortened one at age 30, and then a season where he was a win below replacement at age 31 and then went back to Japan.

Here is his 2007 Frequency, the first year he was in the big leagues. 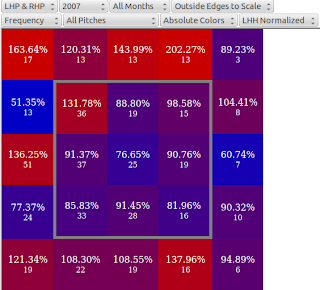 Teams threw the ball very high and a lot of them away to Iwamura.

Here is his Career TAV map: 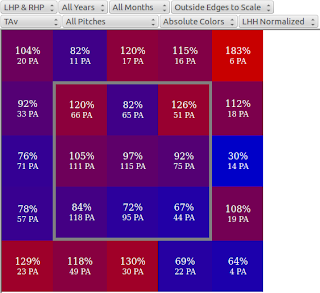 His best zones turned out to be the high zones, and he really struggled on pitches thrown low in the zone, the opposite of the way he was pitched coming up.

In his Career frequency map, we see that pitchers adjusted somewhat, but he still got a ton of pitches thrown up: 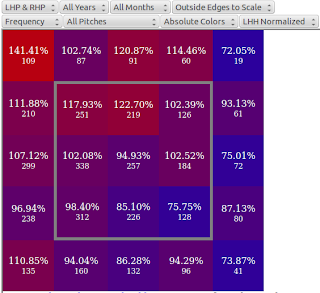 Kosuke Fukudome is usually considered a disappointment in Chicago, but he was a productive hitter in the big leagues until he was traded to Cleveland in 2011. He has since went back to Japan, where he is hitting .170/.262/.295 in 30 games. 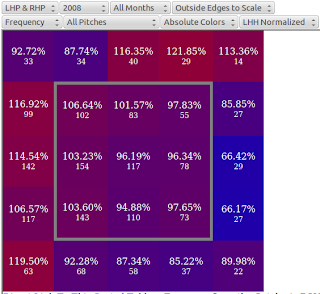 It seems that teams looked at his swing much liked they would eventually look at Aoki's swing and conjectured that he couldn't handle outside pitches, so kept the ball away for the most part.

Here is his Career TAV map, which supports the conjecture somewhat, but also showed that he had a hole in his swing low and in: 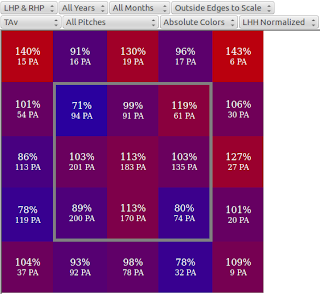 Looking at his career frequency map, it seems that pitchers started throwing it low and in a little more, and while still keeping it away, got a little less absurd in doing so: 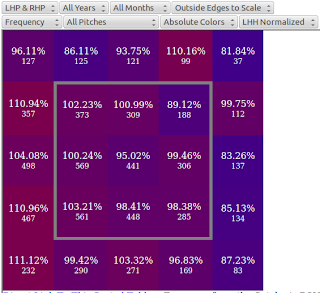 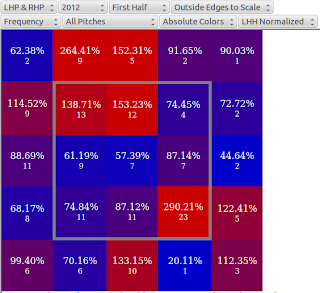 Low and in or up and away.

His career TAV map shows that up and away has turned out to be his best zone: 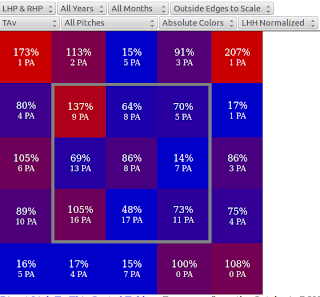 But since it isn't a big sample size, the career frequency hasn't quite corrected yet: 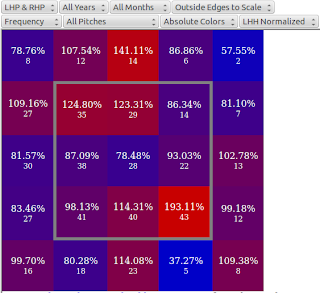 First half of 2011 (for convenience, since he was a switch hitter, I looked at just him versus right-handed pitchers, where there would be a bigger sample size than vice versa) 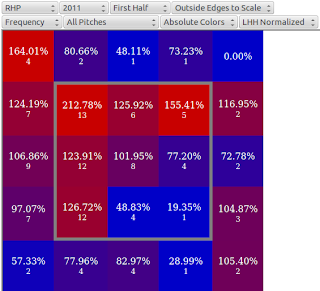 Up or away is where he saw pitches in the first half of 2011. Teams had no interest in throwing the ball low and in to him.


When looking at his career TAV, we see just how bad of a hitter Nishioka was in the Majors for whatever reason. Maybe it was the leg injury, maybe the pressure, or perhaps he just wasn't as good as the aesthetics of his swing or his NPB numbers suggested. 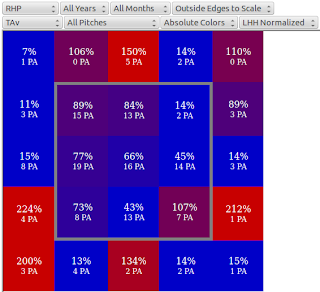 Low and in was his only above average zone in the big leagues from the left side, suggesting that teams somewhat knew what they were doing here

Another small sample size, so the map doesn't adjust a lot for his career frequency, though he strangely started seeing more balls low and in. 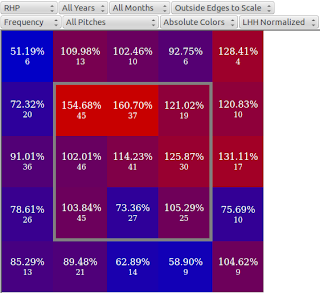 It seems that other than perhaps Nishioka, whom the Twins obviously whiffed on for whatever reason in the evaluation process, and Fukudome teams really didn't have much of a clue of how to pitch to the Japanese imports. Kensuke Tanaka and Hiroyuki Nakajima were both signed in the off-season by MLB teams, and they both haven't played in the Majors yet (obviously Nakajima was injured). It would seem with this evidence that MLB teams are/have been in recent years really poor at evaluating NPB hitters, whether it is which ones are good and worth signing and placing on MLB teams, or how to pitch to these hitters when they are on other teams. This will be interesting to keep an eye on if Takashi Toritani and Yoshio Itoi decide to come to the Majors after the 2013 season.
Posted by Unknown at 3:24 PM