At Fantasy CPR, I had been updating my all free agent fantasy team, but at the request of the editor, I will start updating it here instead. Instead of posting every week and going up on Monday, I'll post it just every two weeks (along with some notes, usually a pitch f/x look at one of the players), and post it on Sunday. If you aren't familiar with the idea, here is the original post.

First, Roster Moves for the week:

Randy Wells, who was in my minor league system, retired, so he moves to the released bin. In his place, I signed Roy Oswalt, whom the Rockies signed to a minor league deal. Evidently he can make up to 4 million dollars if he hits all of his intensives, but for now, I'll just classify it as a MiLB contract until we know the actual numbers (and he is promoted to the Majors). Here is a look at the team with updated WAR numbers:

Since most teams in the Majors have played about 30 games, here is how my team is doing:

Clearly, some guys are turning a corner, and the team is looking a little better because of it. As much press as Jeff Keppinger is getting for his horrible start, Maicer Izturis has been just as bad. One of my favorite stories of the team so far (other than James Loney's unsustainable start and getting any value out of Kevin Gregg, who I used as a roster filler) is Kevin Slowey. Slowey had a pretty poor year with the Twins in 2011, and then was traded twice in the following off-season, pitching in AAA and then going on the DL for the rest of the 2012 season. The Marlins signed him to a MiLB deal, and he has pitched quite nicely so far this year, with a 80 FIP - and 3.55 kwERA. He has done it in typical Slowey fashion, not striking out many hitters and walking very few. The big difference is the home run rate. Statistically, that is going to take longer to stabilize than strikeout and walk rates (which are about career average for Slowey right now). However he does seem to be getting a little bit softer contact.
From 2007-2011, the average batted ball Kevin Slowey gave up (non-bunts, no minimum distance, according to baseball heatmaps) went 203.872 feet. So far in 2013, it is going 194.312 feet.

Here is his spray chart against in 2011 at home (via katron.org): 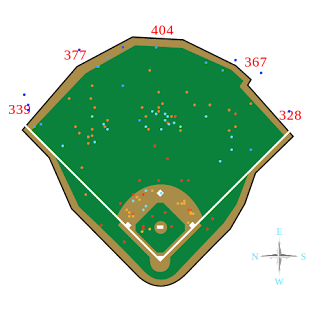 Here it is in 2013 (remember that all distances and spray charts are where the ball ends up): 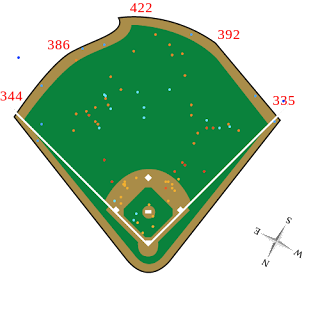 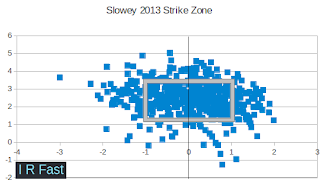 So what are some things that might tell us why he is having this success pitching glove side? For one, Slowey is standing more upright in his delivery than he ever has. 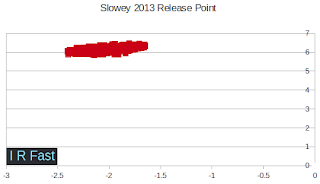 Here is his release point in previous years (each point is a pitch and a year, data taken from Brooks Baseball): 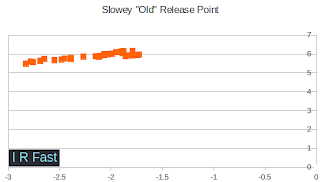 His average before 2013 was about 5.88 vertically and -2.16 horizontally. This year, it is -2.06 horizontally (basically the same), but 6.12 vertically. Zack Greinke and Esmil Rogers are his new closest comparisons, while Chan Ho Park was his previous closest comparison. While Park's delivery was actually good and prototypical, the Rogers and Greinke comparisons are more desirable obviously. However, while it may explain some general success (a more upright delivery is better), it doesn't help explain the glove side success, as both Rogers and Greinke are more arm side pitchers in the strike zone than glove side pitchers (using Brooks Baseball's frequency maps, Park was actually more of a glove side pitcher). I think the main thing for Slowey is that he likes to keep the ball away, which you see when you look at pitches thrown just to left-handed hitters (114 glove side pitches, 144 arm side pitches): 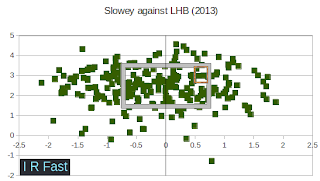 I put the little box in the up and in corner to left-handed hitters to illustrate the point that he is avoiding the part of the strike zone to lefties where they can easily pull a ball for a homer, especially since Slowey has a below average fastball in velocity. Historically, Slowey has thrown pitches in that corner about 5.1% of the time, which is more than a normal right-handed pitcher would throw up there (based on Brooks' maps again). Against lefties, he has thrown a pitcher up there a little less, at 4.3 %, but that is much higher than a normal right-handed pitcher will throw it there against a lefty. From my count (looking at just the data itself), he has thrown just 8 in that highlighted zone (.5 to 1 horizontally and 2.5 to 3.5 vertically) against lefties, which is less than 3.1 percent of his pitches against lefties. Perhaps if he is able to keep this up, that is, throwing away and keeping it out of hitters happy zones, he will be able to limit home runs and be a somewhat better pitcher than he was before (especially if he can keep his strikeout and walk rates the same and continue keeping the ball away).