The Evolution of Shaun Marcum

Going into his start against the Braves on Sunday, Shaun Marcum had an ERA well over 6. However, he would go on to pitch very well against the Braves, striking out 12 in 7 innings, with no walks and a homer. When you looked at his numbers before the outing, you realize that his problems were BABIP and LOB % related, as he was pitching reasonably well, with a 4.24 kwERA. Marcum was a very effective starter in 2010 and 2011 with the Blue Jays and the Brewers, with a .103 fWAR per start, but had an injury and wasn't as effective in 2012 with a .062 fWAR per start. So far this year, he has been closer to his 2010-2011 self according to fWAR per start, mainly because he is limiting homers better than he really ever has before. To get a deeper look at the different levels of Marcum, I broke down his Pitch F/X data into 4 parts (technically 5 as I ignored his 2008 season), his 2010-2011 success, his 2012 season, his 2013 season before the Braves start, and the start against the Braves

There was some kind of error with one of the Heyward at-bats as the data didn't show up, so I tossed it (along with any other data sets that had errors). Using the data from baseballsavant.com, here is how Marcum's locations break down by zone:

It doesn't seem the zones are predictive for what was wrong, or what went right for Marcum on Sunday, or even the difference between 2010-2011 and 2012. So what about release point? Here we can see a clear change:

Strangely, despite some shoulder injuries, his release point is creeping up. It isn't what was predictive for what went right on Sunday, and is only really predictive from year to year in a reverse way, meaning it seems that you would have to believe that the higher release point is worse for Marcum. I think it is just descriptive of him changing, but not really prescriptive of success.

Just like with the vertical release point, Marcum has been moving to what you would call a more ideal place, closer to the center of the rubber. Again, it is unlikely that this is making him worse.

Velocity has never been a key part to Marcum's game, but it is helpful to look at how hard he is throwing anyway (using the traditional 50 feet from home plate measuring stick, instead of the Brooks Baseball way of 55 feet, which makes the velocity tick slightly up). Here is what his velocity has looked like so far this year (broken up by pitches, unlike the rest of the graphs): 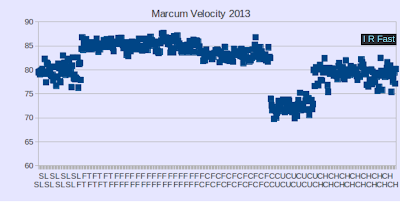 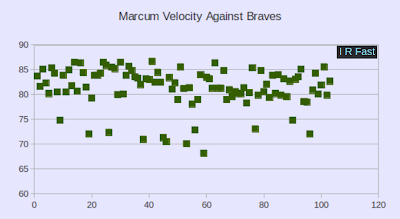 He threw what looks like the slowest pitch of the season in the start, but he certainly was not throwing harder. Marcum threw a little bit harder in 2010 and 2011, but you can still probably count the amount of 90 MPH fastballs on one hand: 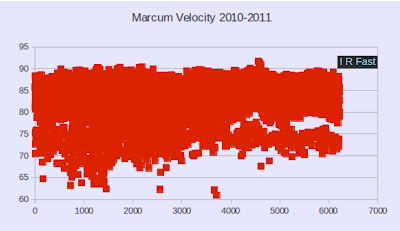 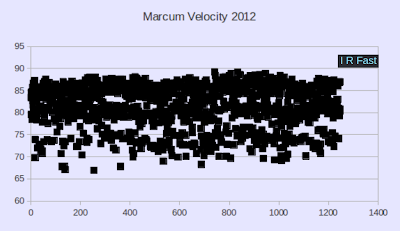 His overall stuff from those 3 seasons doesn't seem to be too different, as far as selection, spin, or rotation goes: 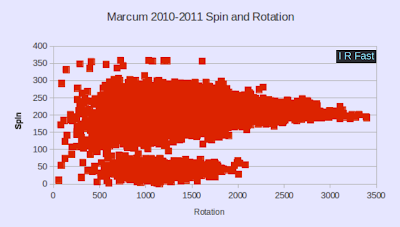 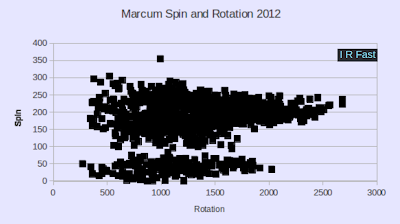 Here is how his spin and rotation looked on Sunday and in 2013 so far: 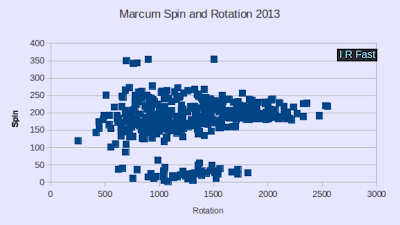 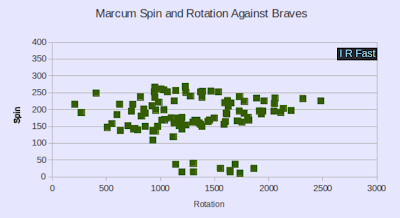 There were no really high spin pitches for Marcum, but other than that (and the fact that his curve seemed to get a little more rotation), it looked relatively the same on Sunday.

So in conclusion, velocity drop seems to be the most likely explanation for why he is no longer the 3 win pitcher he was in 2010-2011, though there is a location explanation as well. According to Baseball Heat Maps, Marcum threw pitches on the "edge" of the plate 15.9 % in 2012, similar to A.J. Burnett and Chris Sale (257th out of 659 pitchers). Marcum had a 17.6 Edge % in 2010 (88th) and 15.7 % in 2011 (315th). According to Bill Petti, he has a 15.5 Edge % so far in 2013. So it seems that he is working on the edge of the plate a little less than he had previously, which could, if you buy into the philosophy behind that data, explain his high BABIP in 2013. As far as 2013 goes, I think Marcum can still be an effective pitcher. I don't think he is quite as good as his FIP and fWAR says he is because I believe the home run rate will regress back to career norms (and even his non home run DIPs like kwERA at 3.47 currently, will probably regress as well), but he can still be a good starting pitcher, the question is whether or not he will be healthy or not.
Posted by Unknown at 10:10 AM