Carlos Martinez got an unexpected call up to the big leagues from the Cardinals last week. The 21 year old right-hander has been a starter in the minors, but they have brought him up as a reliever, a curious move from a development perspective. With that said, let's look at what he has shown in relief so far, and see if we can use tools to project how he might pitch as a starter in the big leagues.

First, let's look at his release point, which has been 5.39 vertically and -1.32 horizontally. Obviously that short of a height makes it hard to make comparisons for him. I count only 3 starters in our release point comparisons that had a 5.3 vertical release point, Tim Hudson, Hisashi Iwakuma, and Chad Gaudin (there are two 5.2 and 5.1 pitchers). Those pitchers have all had injury issues, though two of them are very successful MLB starters.

As a reliever Casey Janssen is really close and the best comparison. I count 10 different relievers that have a 5.3 vertical release point, several of them very successful or hard throwing (Marmol, Romo, League, Camp, Heilman, and Miller for example).

He is just 6 foot, so this explains part of it, but it still shouldn't be this low, especially since he isn't coming out sidearm as well. I took this screenshot that I think illustrates why it is so low: 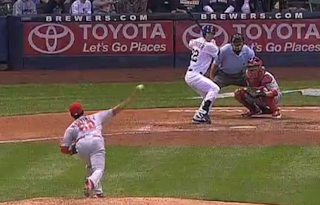 It is not good posture, which makes you wonder if he can stay healthy as a starter or have good control. His head is in an okay place, but most of his body is moving away from his arm.

Let's take a look at his pitches, as always, starting with the spin and speed chart: 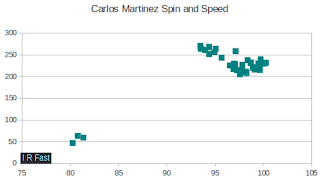 I see two different kind of fastballs and a curveball:

Since the average regression from the bullpen to the rotation is 1.29 MPH, here is how Martinez' pitches would theoretically look like in the rotation:

Stephen Strasburg has the highest average fastball for a right-handed starter in the Pitch F/X era and it averages 96.88 MPH. Strasburg's curve is harder than Martinez' projects to be (and even is as a reliever), but the fastball is better for Martinez, though the sinker (or the more moving fastball) isn't as hard.

When I watched Martinez in the minors last year (and wrote about it on the blog), his problems stemmed from breaking ball and offspeed command. As a reliever, all he has shown is 3 curveballs, with no sliders or changeups. With his plus plus fastball that reaches 100 MPH, he doesn't need those off-speed pitches out of the bullpen. It is basically Nathan Jones or Trevor Rosenthal stuff. He can clearly be an elite reliever, but can he be a successful starter? With the data we have, we can't say, and there seems to be some serious command questions when looking at his delivery.
Posted by Unknown at 2:33 PM