Paul Konerko has been a pretty successful hitter for the White Sox for a long time now, with a 121 wRC + for his career. He wasn't showing many signs of slowing down either, with better than career average years each of the last three seasons. However, through a month and a half of the season, Konerko has been a terrible hitter, with what would be a career low walk rate and career high strikeout rate (if you ignore the 6 games he played for the Dodgers in 1997). He also is hitting for no power, and while his BABIP is lower than it almost ever is (and he had high BABIPs over the last three seasons), the other numbers suggest that something else is going on. He is 37, so you wonder if he is just losing his bat speed. Using Pitch F/X data and other tools, I wanted to see if we could test this.

First, I looked at all 262 pitches he has seen that were 90 MPH and over. There are at least a couple sliders mixed in there, but we will keep them in there, ignoring classifications for now.

He has handled above average fastballs very well, at least when you look at contact versus whiffs (which stabilizes faster, so we don't have to worry too much about small sample size). So it would seem, from this data, that his bat speed is fine. He can catch up with good fastballs and at least make contact with them. Of course, we haven't looked at where he is putting balls in play, which can give us an indication of bat speed.

Here is his spray chart (all pitches) in 2013 so far, according to Texas Leaguers:

Here he is so far in May:

As you can see, so far this month, Konerko isn't pulling any balls down the line with any kind of authority. This could be evidence that he can't get around on balls. Let's compare his chart from last year from the start of the season to May 12th, the same amount of time from the first chart:

It seems that all the batted balls in all the zones are deeper. So perhaps it is a question of strength (which is usually related to bat speed in some way). First, let's look at his spray chart for the entire 2012 season:

Konerko pulled a lot of homers last year, and he isn't doing the same this year, at least not so far. If you look at his average batted ball distance according to Baseball Heat Maps (teasing out balls hit less than 150 feet), he is hitting the ball over 13 feet shorter per batted ball this season. He is simply not hitting the ball as hard, this is not a BABIP issue. When you look at where he is swinging and missing at pitches: 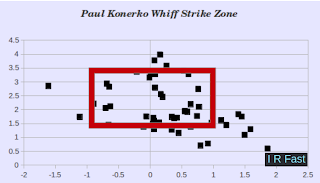 Konerko is missing on some pitches inside, but he is missing at a lot of pitches high and a lot of pitches low and away. The evidence suggests that he is guessing at a lot of pitches, as he is missing mainly breaking balls. Plate discipline is not usually a problem for him, so perhaps he is trying to compensate for lost bat speed. In this way, he is able to keep hitting fastballs (though unable to pull them with authority because the strength and speed isn't there) because he is guessing fastball, but it causes him to swing and miss at a lot of breaking balls. Either way, there is something seriously wrong at the plate for Konerko. Maybe he is just injured and trying to play through some issues. If this is the case, perhaps some rest will help him heal. Or, the problem could be that age has caught up to him, not allowing him to be as strong as he once was.
Posted by Unknown at 1:49 PM