As a starter, Collmenter's average release point is  -.48 horizontal, 7.18 vertical and here is what his Spin and Speed Chart looks like: 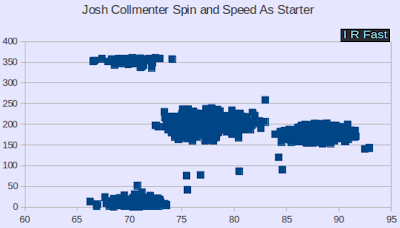 He sure seems easy to classify, but the MLBAM tags have problems with the fastball and changeup differentiation so I classified his pitches myself using the chart as a guide:

Collmenter's big platoon splits (4.36 kwERA and 2.96 HR % against lefties, 3.17 kwERA and 2.79 HR % against righties) seem weird since he throws straight over the top and throws a lot of changeups.

Here are his average locations as a starter, broken down by pitch:

As a reliever, Collmenter's average release point is -.36 horizontally, and 7.23 vertically, so a little bit higher and closer to the center (though nothing real drastic). Here is what his pitches look like as a reliever: 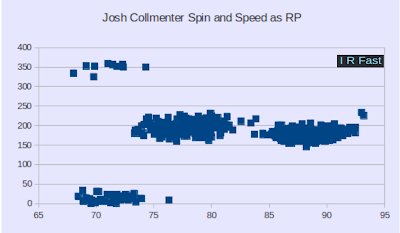 It seems that the difference in  spin between the fastball and changeup lessens in the bullpen. That may mean nothing, or it may mean that they are tougher to distinguish for a hitter trying to guess. Here is the breakdown of his pitches:
Average Pitch: 85.1 MPH
Fastball: 88.17 MPH
Change: 77.98 MPH
Spin Curve: 71 MPH
Non-Spin Curve: 71.32 MPH

So on all pitch types, Collmenter actually has gained less velocity on average than most pitchers who move from the rotation to the bullpen (or vice versa). I think velocity doesn't have much to do with his splits from the bullpen to the rotation, as he is well below average as a starter and well below average as a bullpen pitcher. So how about location differences?:

There is always the chance that as a starter he is just a victim of his home ballpark or the home run rate is just due to regress. The locations are different, especially with the fastball versus the changeup as a reliever, and this may give him a little more deception and help him avoid power more. But, other than that, it is a little hard to see the difference in Collmenter as a reliever and as a starter, so I wonder if a lot of the difference in numbers is small sample statistical noise.
Posted by Unknown at 11:39 AM