Recently, I wrote about Eric Hosmer's weak spots at the plate and whether or not teams knew about his problems at the plate when he first came up. They clearly didn't, at least that is what the pitch data suggested. I've written some articles on rookies this year and how they have been pitched individually. In this article, I wanted to test whether or not teams know (or execute) the weak spots and strong spots in the rookie opposing hitters' strike zone. That is, in some way, I am trying to test just how good teams' minor league scouting reports are. So I picked 5 hitters, all that were big prospects, good in the Majors, not switch hitters, and debuted in 2007 or later. It needed to be 2007 or later so we could use the Pitch F/X data from when they debuted.

I used Brooks Baseball/Baseball Prospectus' heat maps, and for this post, we are only looking at location, and not pitches or anything else. They couldn't be switch hitters because I would have to use extra maps and that would just be annoying. I used the normalized versions for the TAV maps, but not the frequency maps. For a lot of these elite hitters (Ellsbury really isn't an elite hitter, but he is good), they don't have true cold zones, they just have extremely hot zones and zones where they are closer to average.

What I did to test whether or not teams knew their weak spots or not, I looked at their first month's frequency in the big leagues versus their career frequency map and their career TAV (True Average) map. Of course, there are some variables we can't (or didn't) control for using these maps, such as what kind of pitchers they are facing and what may be a small sample size of a first month, but I think this is the best way to approach it.

First, Bryce Harper. Here is his career frequency map, where pitchers have thrown the ball to him in his career: 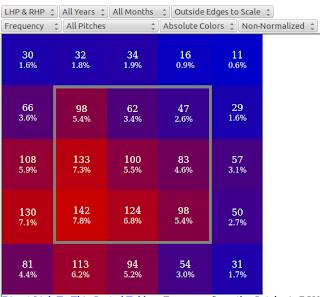 Harper is a left-handed hitter, so we see that pitchers really like to go away from him, almost never throwing the ball up and in.

Here is Harper's TAV map, showing in which zones he has success: 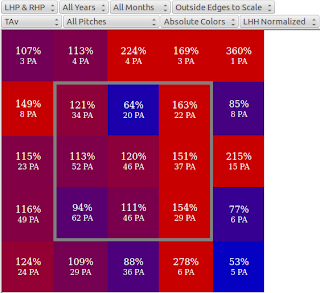 He loves the inside pitch. That is why pitchers are going away. His weak zones are low and away and up high but not in or out. Here is how Harper was pitched in May of 2012, his first full month in the big leagues: 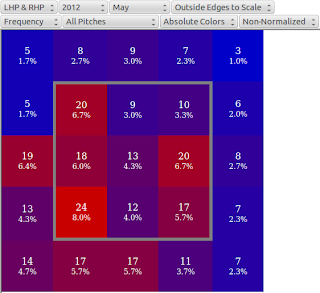 It seems teams knew low and away was his weak zone and attacked him the most there. It seems that teams knew where his "weak" zones were and where his strong zones were.

What about Mike Trout? His career frequency map: 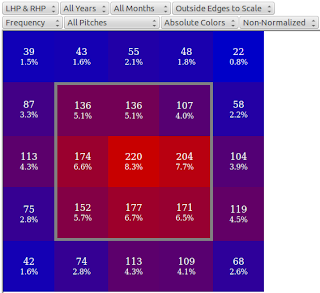 Teams like to attack Trout right down the middle or outside. Career TAV: 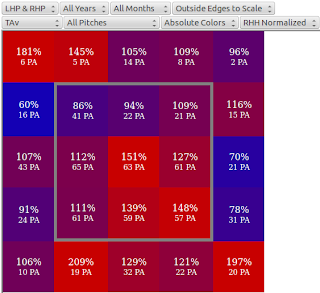 Not surprisingly, Trout's best zone is right down the middle, and he hits low and away balls really well. Up and in is the only place he really struggles in the zone. Here is how he was pitched in July in 2011: 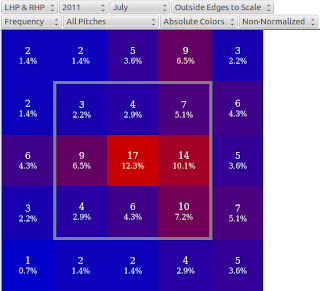 Just like for his career, teams challenged him by throwing it right down the middle or away. So they were wrong about where he would struggle, but they also haven't made much of an adjustment it seems (looking at his 2013 chart, it seems that pitchers are going up and in more, but still trying to go middle away as well). 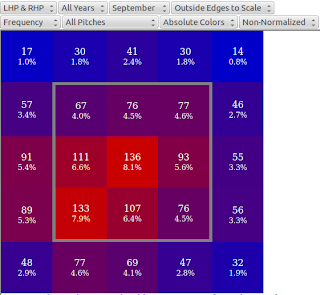 Middle and low away is where pitchers try to throw to the left-handed hitter. His TAV map: 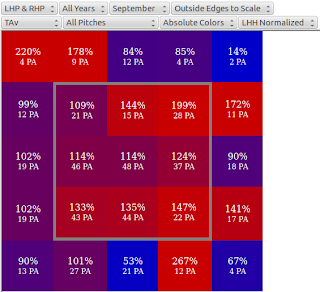 Inside is where Votto goes crazy, but he handles the low and away pitches as well. It can't be fun to pitch to Votto, but here is what pitchers tried to do when he first came up: 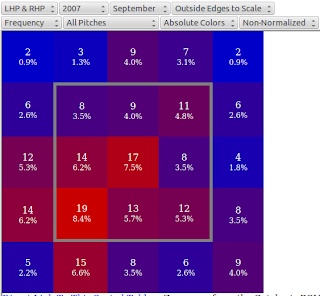 They tried to keep it low and away, avoiding the inside of the plate (except maybe low and in).

Jacoby Ellsbury usually has pitchers trying to go away from him 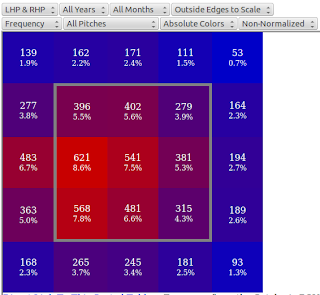 His TAV map shows that he is a pretty balanced hitter, without weak or strong zones for the most part: 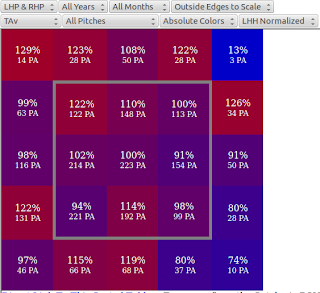 Up and away is actually his best zone, and middle in is his weak zone. The best bet is probably to change speeds and locations to Ellsbury and just not allow him to sit on one zone. Here is how he was pitched in September of 2007: 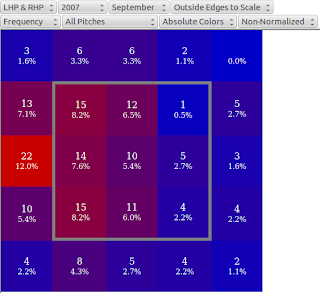 Everything was throw away from him, which I think proves to be erroneous.

Here is how Andrew McCutchen has been pitched in his career: 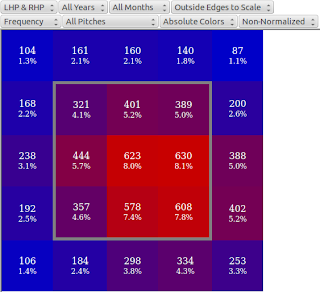 Middle and low and away is clearly where McCutchen has been pitched. This makes some sense when looking at his TAV map: 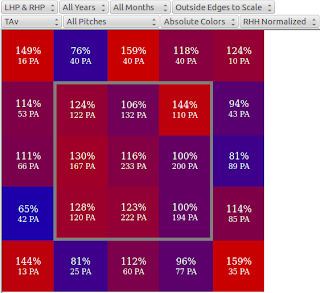 McCutchen hits everything in really well, and up and away is his strongest zone. Middle away and low and away is where he is just average. It seems that teams knew this when he came up, as the avoiding throwing the ball up and threw away or low to him 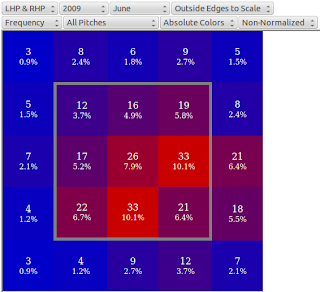 So the reaction seems mixed, but it appears that for the most part, teams some kind of idea where they struggled, with Trout and Ellsbury being exceptions. I wondered if just the general approach was to throw low and away from all of them, and there is certainly a lot of validity to that when you look at the first month map. Just pitching low and away to them seems to be a better description of what teams were doing then finding their weak spots. Traditional wisdom states that rookies usually see more fastballs, though we saw with Bryce Harper last year that he saw very few fastballs. Using FanGraphs leaderboards, we can look at the breakdown of pitch types using MLBAM types for rookies and the league as a whole. First, here are the rookies:

The League as a whole:

The rookies see fastballs slightly more than league average each time (other than 2012 where it is exactly the same), but the results are pretty negligible. League average sees a little more curves, sliders, and changeups than rookies, but again, we are talking about less than a percent most of the time.

My working theory, based on some of this data, is that teams that don't use minor league scouting reports (or what seems less likely, just don't really have them) very much, and that they pitch most rookies about the same as they would other hitters as far as pitch type, with maybe a few less fastballs. However, when big time prospects come up, teams try to keep the ball away from them. It seems that there isn't much evidence that the MLB teams have (or more correctly, use) detailed scouting reports on prospects that tell them which part of the zone they struggle at and which part of the zone they excel.