In 2012, Jon Niese followed up a good 3.77 kwERA 2011 season and a (arbitration buy out) contract extension with a 3.79 kwERA season in 190.1 innings. However, his 2013 season has been a disaster so far, with a 5.46 kwERA, more walks than strikeouts. Reports say that he is dealing with a sore or injured neck. I wanted to see if this showed up in Pitch F/X data, and I thought this might show up in his release point, or location, so the following graph shows his average release point for 2012 and 2013, along with his average location of all pitches thrown:

Strangely, he was throwing the ball higher on average in 2012, the problem isn't that he can't keep the ball low this season, and he was working basically the same horizontally in the zone. With the release point, our release point comparison chart is not very helpful, as there is no pitcher that is a good comparison for Niese now, and the only one at his release point in 2012 was closest, though not real close, to Francisco Liriano. The big thing you notice though is that it has moved, which I think is more important. He is releasing the ball at a shorter height (even though he was already releasing the ball short height wise comparatively), and further out, which is almost never good move.

The release point issue seems to be a good explanation for his problems (or more accurately, the visual manifestation of his neck issue), but it may still be informative to check in on his stuff: 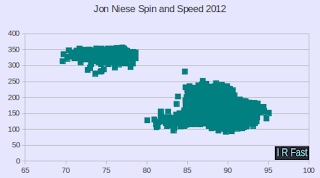 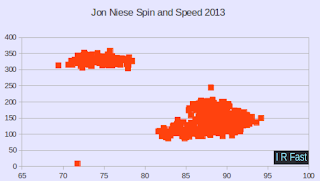 He may have topped out at a little higher velocity (8 pitches over 94 MPH in 2012 at 4 different parks, just one so far in 2013), the general velocity is basically the same. The big difference is the spin. He has thrown just one pitch so far this year around 250 spin, while he had quite a bit (really, the big difference is that there just isn't the 200-250 spin range) around that area in 2012. So he is getting less spin on his fastball (and maybe his changeup). This suggests that he is getting less overall movement and rotation on the ball. So perhaps, even though his velocity is about normal, he isn't throwing the ball with the same stuff that he had in 2012, though I think the release point change (which could be caused by the neck hurting) is a much bigger deal than the lack of spin, or even the location of his pitches, as it lets hitters see the ball a little better and "flattens out" his pitches.