Michael Kickham, a 24 year old left-handed pitcher, made his MLB debut for the San Francisco Giants on Tuesday. Listed at 6'4 220, he is a tall and lanky looking (at this age, it is unlikely he will add much good weight, but the frame is a little slender). He had to face the Oakland Athletics, and they didn't do him any favors by batting all righties or switch hitters against him. Occasionally, lefties have to deal with outings like this, but even one of the more extreme platoon split lefties in baseball, Chris Sale, still faces lefties 21-27% of the time. So having no lefties to face most likely skewed the results for Kickham, even though he didn't have real platoon splits in 2012.

His delivery is a little funky, with no real fluid motion. Instead, it is somewhat jerky, making the timing a little strange, but allows him to hide the ball a little bit behind him. The ball even comes behind his left hip and then comes out of his body. He seems to be working from the center of the rubber, and his back and right side seem to slump down and work against his throwing motion, as his arm gets very far away from his body in a 3/4ths motion. 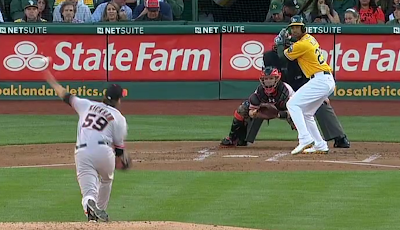 Perhaps it was because he never had the platoon advantage, but he showed that he has no qualms with throwing sliders to righties, coming low and in to Chris Young twice in a row and striking him out. The break on it looked a little non-traditional, but he used it glove side like one. The fastball looks like a sinker a good majority of the time, though there were clearly some high 4-seam type fastballs. He didn't appear to be using a cutter, but he would break the sinker into lefties. At that velocity (90-94 MPH), it could really be effective though the change was rare and didn't look great. He really started using the change the second time through the order. When he threw the sinker outside it can it was hit by Jed Lowrie, and then low and inside sinker was hit for the homer by Norris.

His spin and speed chart makes him interesting and difficult to classify:

Kickham's fastball and sinker are of the low spin variety, perhaps a little surprising since he clearly has big league velocity, above average velocity, especially for a left-handed starter.

The MLBAM tags said he threw 5 splitters, but they all had very low "confidence" ratings.  They gave him some curves, which made sense based on the high spin (as a lefty) and negative movement as well. Calling the 2 most upper left pitches curveballs makes sense. He has a separate split and change it looks like, not just from the MLBAM tags, but from the movement data as well (I can't recall many pitchers having both a split and a change). These are the low spin pitches that are slower than the fastball. The spin data isn't going to help us differentiate between the two pitches, and Harry Pavlidis combined the two pitches. I created my own tags for Kickham, and ended up mostly agreeing with the MLBAM tags with the change and splitter, but broke up the fastball and sinker differently because the tags seemed inconsistent. So here are his average locations based on my tags.

Although the change and split seem to be slight variations, and the sinker is obviously just a variation of the fastball, this is a pretty diverse selection of pitches. The curve is more glove side than most, as is the slider, as the average one was outside of the strike zone. He kept the ball a little lower than average, both with the fastball and all pitches. The sinker and change were extreme arm side pitches, with the split being even more so (which doesn't make a lot of sense and was probably not on purpose).

You can see it in picture form above, but this is what Kickham's release point looked like, in graph form, during the game:

Aaron Laffey or Derek Holland aren't bad comparisons for release point, though obviously those are two totally different pitchers velocity and effectiveness wise, with Kickhan being closer to Holland velocity wise, though not quite as good.

Kickham's command really was bad in the 3rd and it got him taken out of the game. His velocity also seemed to fade as well and he couldn't get out of the inning. However, there was no real release point change per inning:

However, he located much differently in the 3rd inning, throwing a lot more pitches arm side, after working glove side in the first two innings:

This is usually a symptom of not finishing the delivery. He was starting games in AAA, so it is unlikely that he got tired in the 3rd, especially since the 1st and 2nd weren't long innings. As the data above shows, it wasn't release point inconsistency either. Watching live, it didn't seem that this was on purpose, as he was clearly missing his spots.

It appears that Kickham will get another turn in the Giants rotation to redeem himself from the bad third inning in his first start. He has a nice assortment of pitches and big league stuff, but delivery repetition may be a little bit of a problem, especially finishing as the game goes along. I am sure this is something that the Giants coaching staff will be looking at mechanically in his next outing.
Posted by Unknown at 11:49 AM