Does Pitches per Plate Appearance tell us anything about a pitcher?

I wanted to see if pitcher's pitches per plate appearance had any bearing on whether a pitcher is successful or not. I am dividing it up between starters and relievers. For starters, I am using all the pitchers in the AL Central that had at least 5 starts and 2 or less relief appearances. Click on the Photo to enlarge and see the results. 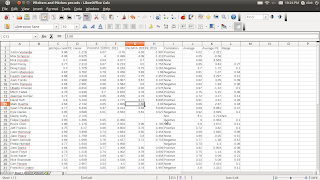 Verlander, the best pitcher on the list and the Cy Young winner in 2011, was over 4 pitches per plate appearance and helped carry the over 4 pitchers to a -.059 average. Personally, 12 pitchers got better when they threw more pitches per plate appearance, 8 got worse, and 10 had no real correlation. There are a couple ways to take this. The more aggressive would be to say that pitching to contact is not a desired approach and that is better to go for the strikeout even if it takes more pitches. The more conservative would be to say that there doesn't seem to be any real relationship between pitches per plate appearance and success (more specifically, PE, which awards strikeouts, measuring WHIP or FIP may yield a different result). The 10 pitchers that threw less than 3.7 Pit/PA on average had a horrible PE average of 3.746. If you only have 3 and half pitches per plate appearance it is hard to have any strikeouts, but that wouldn't hurt your PE as much if you kept a low ERA, WHIP, and BAA. If your PE is almost 4, you are giving up a bunch of runs and hits. So it certainly seems, for starters, that there is a positive correlation between pitches per plate appearance and success. This leads to an interesting question, is a high Pit/PA for a hitter bad? The answer seems to be no. I wrote an article on here where I showed that all the top hitters in the game, beside Miguel Cabrera, had an above average Pit/PA. So perhaps paradoxical, the best pitchers and the best hitters have high Pit/PA. In Part 2, I will do relievers and see if we get the same result.
Posted by Unknown at 10:28 PM