Ben Nicholson-Smith had an excellent piece that showed that the Blue Jays, specifically Colby Rasmus, have been facing top notch fastball velocity in the early going of the MLB season. In the article, Rasmus claims he hits faster pitches, specifically fastballs, better. I have always been interested in Rasmus from a distance (I haven't been as big of a fan of him as many, especially the Blue Jays evidently), and wanted to test the claim Rasmus made and look at some of his other tendencies as a hitter to see if we could figure out the puzzle that often is Colby Rasmus.

So using Pitch F/X (specifically Brooks Baseball's Tabular Data by games) I looked at all the pitches Rasmus has seen against starters in 2012 and early in 2013. If for some reason someone wants to look at those pitches and make their own observations or charts, you should be able to download my spreadsheet by clicking here.

Out of those 1495 pitches, Rasmus has seen 80 pitches over 95 MPH. He swung and missed at 9 of those (11.25%). He has put 15 of them in play, 12 of them for outs, and 3 of them for no outs. BABIP plays a role obviously, especially in a sample size this small, but it doesn't seem that he is having a lot of success on top notch fastballs (not that we would expect anyone to have a lot of success with 95-99.5 MPH fastballs).

I count 122 four-seam fastballs thrown below 91 MPH and count 7 whiffs out of that group (5.7 %). So it would seem that Rasmus gets better the slower the fastball is, which again, is what we would expect normally, but shows that Rasmus' confidence in squaring up 95 MPH fastballs is probably overstated (of course, no hitter is going to say "I just give up whenever I see 95 MPH fastballs because I don't hit them as well").

Of course, much of the context of Rasmus' confidence in hitting harder pitches was versus breaking pitches. When you again sort pitches into bins just by velocity and ignore classifications:

So we see that the 80-85 MPH range is really his trouble spot. This is where many of the sliders and changes are going to be. However, when you slow it down a little more, where most curves are going to be, he has more success. Overall, his whiffs came on an average velocity of 86.67 MPH, while his run scoring plays came on an average velocity of 87.84 MPH. So it seems that, while he is better against softer fastballs than harder fastballs, he is somewhat right about liking harder pitches. However, if you look at the balls he has put into play, the ones that have turned into outs average 88.5 MPH, but the ones that were not turned into outs were 87.28 MPH. So the relationship is definitely complicated.

Again, we see the somewhat inverse relationship that may just be affected by BABIP. 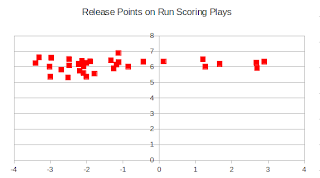 Here are the release points on Rasmus' whiffs 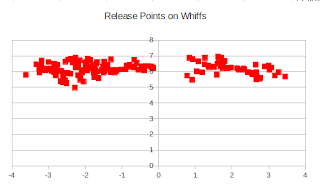 It is tough for me to see much of a difference (other than the obvious one, he is struggling against more sidearm type left-handers, which we would expect all lefties to do), especially since the sample sizes are different sizes. With that said, I find it fascinating how much he is missing on right-handers that have a very "out" or 3rd base side of the rubber release point. Usually, you would expect him to see the ball better from those pitchers.

It still may help us to look at his strike zone: 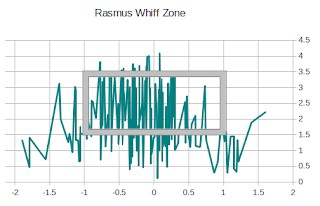 As we would expect from looking at his velocity data, he is really good on pitches up and in. The problem doesn't really seem to be bat speed or any kind of hitch in his swing (or the timing that comes with his leg kick). Even though he predictably struggles with harder fastballs, he gets around on average ones. The problems come on balls low, whether away, inside, or down the middle (or just middle to outside in the strike zone). He doesn't respond to hard/medium breaking balls very well. This may help us see why he is missing so much from "out" right-handers, as they may just be feeding him braking balls outside, which he can't really hit anyway, even if he sees it.

When we break down his stance and his swing (screenshots below), we see nothing that tells us he should have such problem with low breaking balls. He doesn't have a weird open stance: 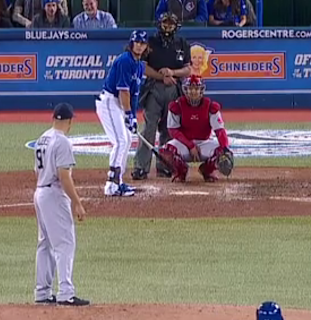 He keeps it straight as the pitch is delivered, and even leans in to give him some reach: 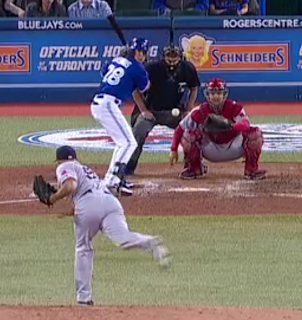 And he has good plate coverage: 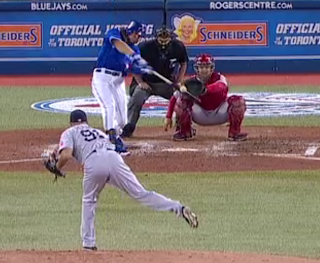 There doesn't seem to be anything obviously mechanically wrong with his swing. As hinted to by himself, he may just have problems recognizing pitches.