Much has been written about Roy Halladay's loss of overall velocity and overall effectiveness, as he followed a terrible spring training (after a mediocre season) by being pounded by the Braves in the opener. I noticed while watching highlights of his start, and I think others have since noted this as well, that his arm angle looked pretty low and out. Instead of coming at some kind of 3/4 angle, he was coming out more sidearm. Sure enough, the data suggested this as well. Below, I looked at his opening day start from 2011, his final 2012 start, and then his start in 2013.

This chart should show the difference in both the height and the side: 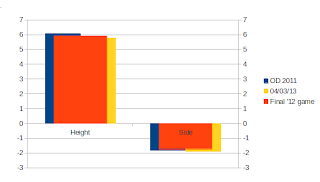 Here is his difference in height: 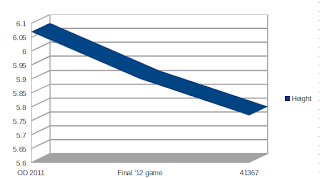 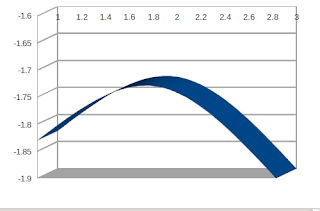 That last one may be a little misleading as the chart goes down, but (since it is negative) he is coming out more.

Basically, Halladay is pitching more sidearm, which is almost never a good thing for a starter. Halladay went from being 6.16 feet high total (so we don't even see the initial drop from his earlier years to 2011), which is closest to (thanks to our sortable release point charts) Greg Maddux and Vin Mazzero, to 5.77, which is closest to pitchers that are either soft tossers (Cloyd and Vargas) or extremely wild or injured pitchers (Sanchez and Bedard). In fact, at his new height, it is hard to see a successful pitcher within 20 pitchers or so (depending on what you think of Vargas, Alex Cobb is probably the best pitcher in the general area of 5.7). I count 17 right-handed pitchers in the area of (-) 1.9 feet out from the side. The majority of these actually turned out to be relievers (like Joba or Boggs)  or very back of the rotation starters (Lyles, Humber, and Pinero). I count three as being real successful starters (Vogelsong, Dempster, and Zimmerman, with Davis, Hunter, and Volquez sort of on the edge). Compare this to Halladay's old release point from opening day of 2011, where we get a lot of successful starters (Harang, Mussina, Paulino, Schilling, Baker, and Cahill). The movement doesn't look like a lot, but it is telling when making comparisons, which is why I thought making the chart was so useful.

The closest comparison in both height and horizontal "outness" for Halladay is a right-handed Jonathan Sanchez. We don't have Sanchez data from 2013 yet, but when looking at Sanchez' 2012, we actually see that he was releasing the ball further out and lower. Sanchez has regressed more to this point, but it still isn't a good sign for Halladay, who has usually been an efficient control artist. We have only actually looked at the average release point and have yet to look at whether or not he is less or more consistent.

So as we see, not only has his release point changed in a way that is less desirable, it is also more inconsistent (though I guess that isn't surprising if we are talking about a change). He has been especially less efficient when it comes to height, as we don't see a lot of change in consistency from the side. He has had some back and hip issues, so this isn't exactly revelatory information.

John Axford, the Brewer's closer, has also been really struggling and now some blame has shifted to his release point. When looking at Axford, we see something strange 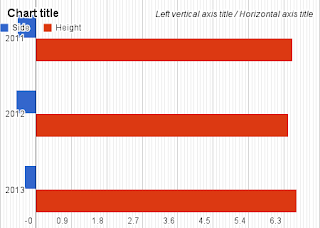 Though his release point has become more "visible" to hitters according to reports, he is actually releasing the ball higher and less out. This is obviously the opposite of Halladay, and one would think it would be the opposite of easy to see, because his arm isn't coming out. There does seem to be a change though, and maybe that is the problem.