Cody Buckel is a good prospect. Nearly two years ago, FanGraphs' Mike Newman noted his advanced tools, saying "in terms of sheer “pitchability”, Cody Buckel is the best I’ve seen at the South Atlantic League level". Marc Hulet ranked him as the 7th best Texas Rangers' prospect going into 2013, saying "He uses a four-pitch repertoire to disrupt hitters’ timing and he moves the ball around the plate". Baseball America said he had the best control in the Rangers' system in 2011 and ranked him as the 8th best prospect in the system before the season. However, Buckel has been a Dellin Betances meltdown machine statistically so far in 2013 (and just as painful to watch).

According to Lone Star Dugout's Jason Cole (on the Frisco Roughrider's broadcast), at least some of his problems stem from "arm drag" (that is, the arm is behind the body, as his body has already committed and his arm is still "coming through") and that is causing him to miss a lot armside with his fastball. The velocity is not down according to Cole and others, which we wouldn't necessarily expect it to be down anyway, because his problem is throwing strikes, not getting hit (though if it were down, we would certainly wonder about whether or not he was healthy).

Tepid Participation of Lone Star Ball has talked to scouts that believe the problem is mental. They believe that these mental problems (whatever they are) are causing mechanical problems. We can't (or I can't, with absolutely no psychological training) measure "mental problems", so let's take a look at Buckel's mechanics through screenshots. Since he was successful at the end of 2012, I picked a game from August 13th and compared it to his meltdown on April 27th 2013.

Leg kick is the same:

I don't see the arm drag that Cole is talking about, at least not in a way that wasn't present when he was going really well in 2012 (his posture is certainly not good, but to make the argument that this is the problem, you have to argue that his success was fluky). The head even looks like it is in the same place.

We do have Pitch F/X outings from Buckel's 2013 spring training. It is hard to see any kind of mechanical problem with that data, as he was extremely consistent in repeating his delivery, with a .078 horizontal standard deviation and .07 vertical standard deviation. When I gathered a full turn through the rotation for all the MLB teams a week ago, no one had this consistent of a delivery. The fact that he was throwing short outings in spring training helps, but he was repeating his delivery well, and clearly wasn't a mess, something the screenshots support. Here is his release point from spring training in graph form: 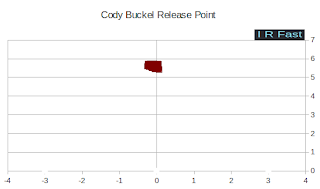 As we can see, very consistent, but also bizarre. As we see in (all of) the screenshots, Buckel is right-handed, yet stands on the very first base side of the rubber. This gives the impression, when looking at the chart, that he is a short pitcher that comes right over the top. Looking at our starting pitcher release points, the only one that is even close is Justin Germano, who has almost exactly the same horizontal release point, but releases the ball about two and a half inches higher than Buckel. Here is a screenshot of Germano, compare him to Buckel: 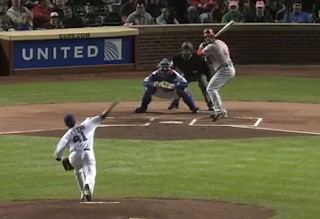 As you can see, there are similarities, but for one, Germano is a little more upright than Buckel, and yet comes out a little more with his arm. It needs to be said that Germano is a journeyman, pitching for 5 different MLB teams (and probably his 6th soon, with the Blue Jays), and in both Korea and Japan. However, he doesn't throw as hard as Buckel either, averaging about 88 MPH on his fastball, while Buckel's fastball is closer to MLB average. So when Buckel is right, he has a much higher ceiling than Germano, but he may inherit some of Germano's good aspects as well. Germano has had good command in the Majors (7.3 BB %, 62.6 strike percentage), and has had reverse splits (via FIP and wOBA), most likely because of where he stands on the rubber. This basic Pitch F/X data says that Buckel is not only a good prospect, but has the consistency to pitch in the Majors already. However, he is clearly not, and closer to being sent to Arizona for more Spring Training than the big leagues.

It is unlikely that Pitch F/X would pick up "arm drag", at least not in release point consistency, but we can look at the (small sample size) strike zone Buckel had in spring training: 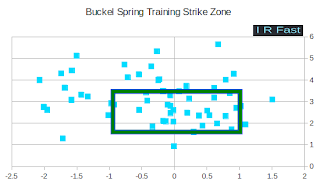 This is from the catcher's perspective, so we see that there is a heavy dose of armside pitches that miss, and miss a lot. He also has a lot of pitches up and not many down, which I've seen in some scouting reports as being a problem with Buckel, but is probably not part of the problem he is having now.

So the problem sure looks mechanical, but I just don't see it when I am actually watching Buckel and looking at the screenshots of his delivery. If the problem is mechanical, I don't see how he succeeded last year, at the same level, throwing strikes. I doubt it is armspeed, as his velocity is reportedly fine (and was solid in spring training). Perhaps it is mental, but I am not sure how one would measure, prove, or treat that problem.