Jake Arrieta had a really strange outing on Sunday, which is probably a fitting microcosm of a really strange pitcher, at least when it comes to results versus stuff. Arrieta started against the Dodgers and looked absolutely filthy, throwing a plus plus fastball right by hitters, and mixing in a very hard slider to keep them off balance. Even mainstream reporters were taken aback by his nasty stuff and how well he was pitching. Then, before the 4th inning, I actually turned from the game to watch the Mariners, and saw later in the day on highlight shows that, despite having a big lead, the wheels absolutely came off for Arrieta and he ended up blowing the lead, losing the game, and getting sent back to AAA at age 27. In this post, I wanted to breakdown his outing and see if I could find anything to help us unlock the strange puzzle that is Arrieta.

The first two innings for Arrieta were completely dominant, he got 2 strikeouts, 2 groundouts, an infield fly-out and a fly-out to center.

Average velocity on all pitches: 91.51 MPH 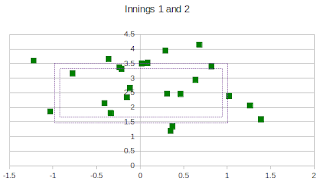 As you can see, he is throwing mainly glove side here, away from righties, in to lefties.

The 3rd inning was very shaky, as he walked 3 batters, gave up a run, and struck out two swinging. 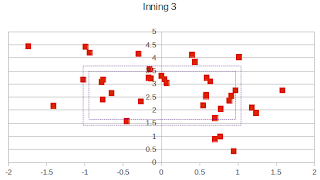 Here, he misses more arm-side, suggesting that he is perhaps not finishing his delivery as well. He also had a lot more pitches that were thrown up high as well.

Standard Deviation was .164 horizontally and .085 vertically

In the 4th, it looked like he had put it back together, with 2 strikeouts, and a groundout. 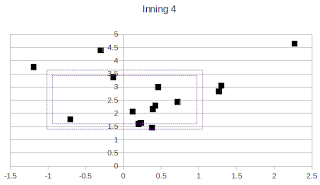 Here, he is back to working glove side, this time basically exclusively. He also got the ball down more.

In the 5th, the wheels came off. He walked a batter, plunked a batter, walked another one, then gave up a single. His day was done, with no outs recorded in the inning. 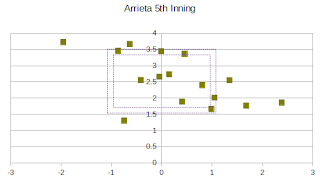 He actually continued to work more glove side, but there is a few more pitches left up.

Standard deviation was .14 horizontally and .071 vertically.

So he wasn't more inconsistent with his delivery, he just dropped down as he struggled (or struggled because he dropped down). I wanted to see if this was visible by screenshots. The one on the left is not from the Dodgers game, but represents a 6.51 vertical release and -2.35 horizontal release, basically what he was doing in the first two innings (I used that instead of one from the Dodgers game because he was wearing 42 for Jackie Robinson day in this one, which helps show the difference), while the one on the right is his last pitch against the Dodgers: 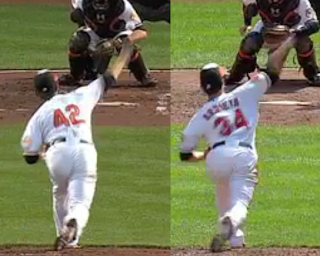 Strangely, his posture is actually a little better on the right, but it clearly a more over the top delivery than his Dodgers delivery, which is why he had a higher horizontal number and lower vertical number.

His velocity also regressed badly as the game went along, as you see. This raises a chicken or the egg question. Was his velocity regressing because his arm angle came further out? Or vise versa?

It also causes one to speculate. Is he tired? Is he hurt? Why did he "wear down" so quickly? Is his delivery simply too hard to repeat? It doesn't appear to be particularly violent, but is it really just putting too much strain on him? Is he yet another Orioles starting pitcher destined for relief? If he keeps breaking down in games like he did on Sunday, the Orioles may ask him if he can just throw 100 MPH bullets out of the pen (a bullpen that doesn't have a lot of room in it).
Posted by Unknown at 11:19 AM