C.J. Wilson is probably the most successful reliever to starter conversion in at least recent memory. His move to the rotation helped the Rangers' reach two World Series and helped him get a 77.5 million dollar deal over 5 years with the Angels. So far, Wilson has not been the same pitcher in Anaheim, with a -1.3 WAA over 214.1 innings (he had a 5.2 WAA in 427.1 innings in his two years as a starter with the Rangers). When Wilson has had problems, it is usually because of walks. When he struggled against the A's on his most recent start (April 9th), he threw over 40 pitches in the first inning. Since becoming a starter, Wilson has thrown 3.97 pitches per plate appearance. This can be a good thing, in fact, the elite pitchers throw more pitches per plate appearance than pitchers that don't (strikeouts), so I wondered if we could use Pitch F/X data to see if we could reasonably conclude whether or not the high walk totals are a choice by trying to pitch around batters (and not being successful from a lack of stuff) or whether he just legitimately is having problems repeating his delivery.

If you look at all of Wilson's fastballs combined (cutters, 4-seamers, etc. all added together, skirting around most pitch classification problems), he is averaging 91.06 MPH so far in 2013 with 1.51 horizontal movement. In 2012, they averaged 91.81 MPH with a 1.59 horizontal movement. In 2011, his fastballs averaged 1.6 horizontal movement and 91.17 MPH. If you are looking for a dramatic loss of stuff for Wilson, then you need to look at something other than fastballs. We could break down the breaking pitches pretty easily, but instead, let's look at Wilson's release point to see if this gives us any insight into his command.

When looking at his release point data for his career, I noticed that he has come more "out", going from having his arm when it releases the ball about 1 feet from the center of the rubber/plate to about 2 feet in 2013. This started happening in August of 2012 so I decided to look at pictures (screenshots I took of highlights) and release point Pitch F/X data. 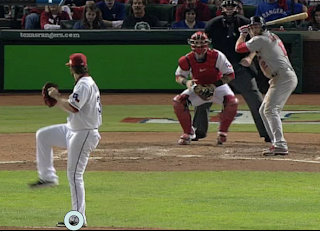 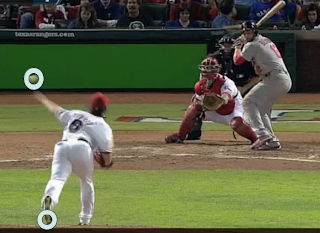 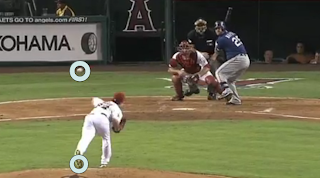 Let's look at the numbers to see if this changed how consistently he repeated his delivery.

We wouldn't expect the vertical to change much, but it seems he has gotten more consistent at how high he is releasing the ball. He also improved horizontally, going from a horrible number to one that is a little more manageable. 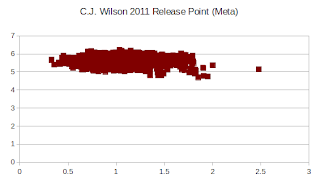 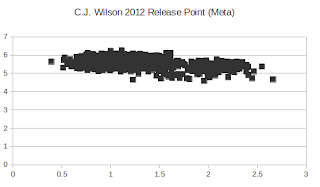 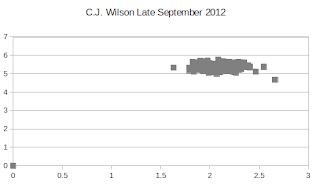 Obviously the further out part of his overall 2012 graph was simply his move on the rubber, which makes his year on a whole look worse. So the sample size was smaller, so we should be careful, but Wilson did repeat his delivery better after the change. Let's look at 2013 so far. 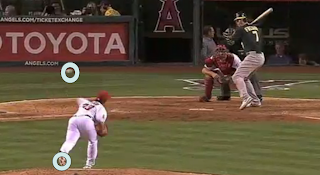 He is basically went back to his old horizontal inconsistencies, while his vertical release has remained better than it was. That is sort of a weird find, as we would expect the horizontal to be the one that is affected the most.

In Graph Form, here is the zoomed in version: 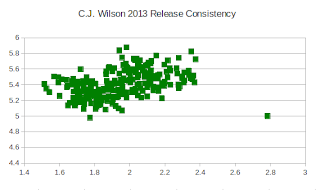 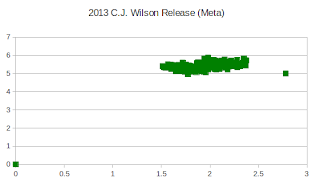 From a numbers perspective Wilson (small sample size alerts apply for early 2013 obviously) has not gotten better. His stuff seems to be more or less the same from 2010-2011, and he seems to be repeating his delivery at least a little better. So we are left with three choices in my view, 1) This data suggests he should get a little better, 2) He may be a little more consistent at repeating his delivery, but the move on the rubber is a negative thing and cancelling out any benefit or 3) It is some other variable that we are not considering. He is pitching in the same division, against similar opponents, and while yes he is older, the stuff seems to be there. I could be missing something, but I can't quite figure this one out.
Posted by Unknown at 11:55 AM