Thad Weber made his Padres' debut on Saturday, when he had to eat up innings after a poor Edinson Volquez start. Weber was optioned after the game.

While I was watching him, I was really impressed with the vertical depth he got on his curveball. It was also strange to me how hard he threw it considering his fastball velocity, which was usually around 90-91 MPH.

He really struggled to locate the curveball though, and several of them were hit because they were left up in the zone: 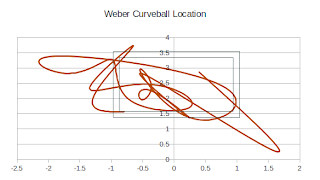 This may be because he had some problems repeating his delivery: 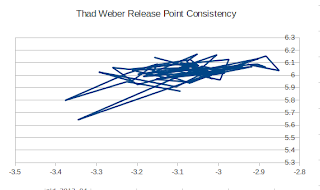 As you can see, this is also quite a bit far out horizontally as well, making it very easy for lefties to see.

Weber threw his curveball 20 times out of 65 pitches in his game against the Rockies, which is 30.8 % of the time. Since the Pitch F/X era began, there have been just 6 qualified relief pitchers that have thrown a curve ball that much. Mike Lincoln, Jason Bulger, Taylor Buchholz, and Jose Veras are the lefties. 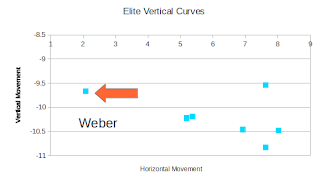 It is clearly a straight drop down curve, not moving or sweeping much horizontally. However, it is a hard curveball as I mentioned above.

Like I did with the movement data, I also added the velocity to Weber's pitches for his Padres' outing that Petco Park seems to take away according to the park effects (the Tigers' park evidently doesn't have an extreme effect on right-handed pitcher velocity). This changes his fastball velocity to 90.78 MPH and his curveball to 81.54 MPH. Only 11 right-handed relief pitchers in the Pitch F/X era (out of the 45 that have thrown at least 500) have had a faster curve than that, and they have an average whiff/swing percentage on their curves of 39.05 % (the median is about 33 %). These pitchers all, without exception, throw much harder than Weber, and averaged 94.51 MPH on their fastballs. This makes Weber's curve even weirder. It is a curveball, both the visual test and the Pitch F/X movement data assert this, so this isn't a classification issue.

This velocity data, along with the vertical movement we saw above, makes Weber's an elite curveball. He knows it is his best pitch, at least that is what his usage indicates, but how rare is his combination of velocity and movement, I think this stacked chart of the 46 right-handed curves (putting Weber with the 45) gives us a view (I changed the vertical movement, which is the red color at the top, to positive just so it would stack).

The only right-handed relief curveball that has more velocity plus vertical movement is Craig Kimbrel, who is the best reliever in baseball. Clearly, Weber doesn't have the fastball Kimbrel has, and will never be in the same league as Kimbrel. He also is already 28, so not a prospect by any means. We don't know how his command will be, and the release point data suggests not good, and he probably won't be very good against lefties, but we have seen late developing strange one pitch relievers have success before in the Majors, and Weber's curve may just be good enough to get MLB hitters out and give him a MLB career.
Posted by Unknown at 3:03 PM