An Advanced Look at Jose Fernandez

The Miami Marlins surprised the baseball world when they announced that top pitching prospect Jose Fernandez had made the team out of spring training. While Fernandez' 27 minor league starts since being drafted in the 1st round out of high school in 2011 had been absolutely dazzling, Fernandez had never pitched in AA or AAA and is just 20 years old. Fernandez' first career MLB start was against the Mets, and it went very well, with one walk, eight strikeouts, and just one run in 5 innings. We have Pitch F/X data from the Future's game in 2012, in which he lit up the radar gun, averaging over 99 MPH, but in this post, I will just look at his start against the Mets.

The first thing you wonder about with such a young pitcher (especially since the stuff, which we will look at later, is assumed) is consistency, more specifically, control, which is usually driven by delivery repetition. Most minor leaguers go through a large amount of innings in the minors trying to iron out these issues, but Fernandez has skipped a lot of this formative time. So how did he fare? In this graph form, you want consistency and not much variation in the lines. For example, look at Tyler Cloyd's last outing of 2012: 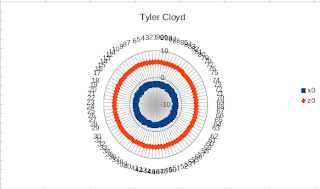 Look at how there is not much variation from line to line. For comparison, here is Tim Lincecum's first start of 2013: 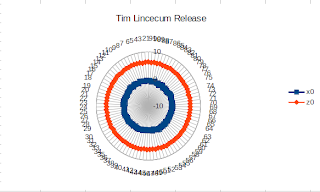 There is much more variation there, especially in the horizontal (the blue) section. Here is Fernandez: 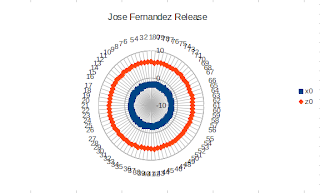 As you can see, he is no Cloyd (but no one thought he would be), and he seems to have more problems vertically (the red) than Lincecum, but his horizontal consistency seems to be better. Let's check the numbers, including a couple of other random starters from the day as well (in graph form of course): 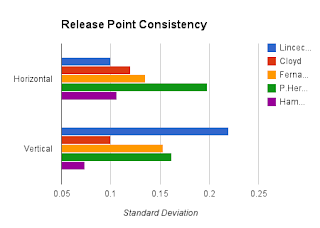 As you can see, Fernandez is about in the middle out of the 5 pitchers, probably a little better vertically comparatively. He certainly fits in with this diverse group pretty well (Jason Hammel's ability to repeat his delivery is pretty amazing, or at least it was on Sunday). So it seems that Fernandez demonstrated the ability to repeat his delivery in a big league fashion. He isn't a guy that is just all stuff with no idea where the ball is going, he seems advanced and mature from that perspective.

How about Fernandez' actual release point? If we look at our release point comparison charts, we see than Fernandez' average horizontal release point of (negative because he is right-handed) 2.34 and vertical release point of 5.82 is closest to Chad Billingsley, Kyle Weiland, and Derek Lowe. Obviously these comparisons are not very flattering when you are talking about a guy who looks like an ace and one of the top pitching prospects in baseball, and I found the fact that he released the ball so low on average interesting. Though perhaps a couple inches shorter than the ideal top of the rotation right-hander, he isn't short. He is 6-2. And while it is clear that he was much too talented for the levels, it isn't like he had problems getting on top of the ball in the minors, with just 2 homers given up in his career, and a solid 45.7 percent groundball rate. Of course, Lowe and Billingsley are good groundball pitchers and Weiland wasn't bad at getting grounders, so the "low" release point may play into his favor (though there may be an injury risk, as the pitchers around that general area seem to have a high injury rate, though as we saw, Fernandez repeats his delivery pretty well). Not only is he a little lower at releasing the ball than an average right-handed pitcher, he also is a little more out: 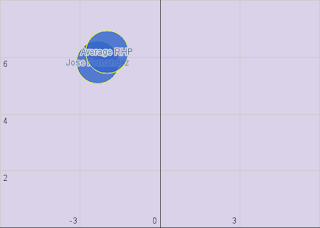 What does this mean? He could have bigger than average platoon splits, depending on quality of pitches and other factors. Since he was so dominant in the minors, it doesn't do a lot of good to look at his minor league splits. Instead, let's finally start looking at his stuff.

The average pitch he threw, regardless of pitch type, was 90.99 MPH. Here is a complete list of right-handed starters in the Pitch F/X era that have had an average pitch of 91 MPH or over: Wily Peralta (.04 MPH harder than Fernandez). Fernandez threw 8 pitches over 97 MPH, maxing out at 97.78 MPH.

He worked both sides with his fastball, throwing it heavily (I count 52 out of 80, 65 percent, part of the reason his average pitch type was so high, though this is not an unhealthy selection of fastballs, especially since it is a plus-plus fastball). It averaged 95.55 MPH, an average fastball velocity topped by just 9 right-handed starters in the Pitch F/X era.

Fernandez threw 5 changeups, all against left-handed batters. It averaged 86.51 MPH, closest to Carlos Carrasco and Matt Cain. Both of those pitchers have fastballs that are 2 to 3 MPH slower than Fernandez'. While it may seem a little strange to complain that a changeup is too slow, we see some correlation between velocity and whiffs with the changeups, and the spike really comes on changeups that are over 87 MPH (changeups that were 86 MPH to 86.99 MPH had an average ranking in whiff/swing %, out of 185, of 98.4, while the 7 changes that were harder than 86.99 MPH had an average 46.4 in whiffs, much better). Fernandez' change had an average spin of about 257 degrees, while his fastball had an average spin of 213.37. That fastballs spin is rather low, and it is really strange that his changeup spin is better than his fastball. As far as movement goes, it gets very good at getting horizontal movement with below average vertical movement.

The curve and the change is a slider is a little bit difficult to differentiate using the data (and evidently manually as well). Just working with the MLBAM tags, his slider averaged a spin of 79.05 and a 83.48 MPH, while his curve averaged a spin of 64.35 degrees and 81.18 MPH. Here is a spin and speed graph of all his pitches. 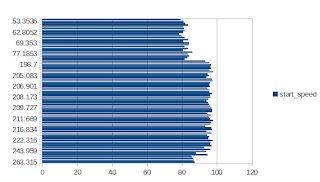 Here you can see where the change had more spin than the fastball, and I think it gives us a clearer difference between the slider and the curve:

However, it is a little more difficult than that, as a spin chart that only includes the curves and sliders shows. There is a group of pitches that are difficult to classify one way or the other. 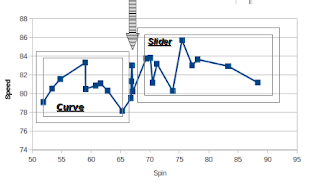 The problem is that the distinction is really important. They seem to be two different pitches, or at least there is a wide variation of spin and velocity for one pitch. Either way, if you look at the pitches we are calling clearly sliders, it averages just 82.79 MPH. That is a nice curveball, but a slow slider. Out of right-handed starting pitchers, it is 116th out of 170th (the bottom 32 %). The problem with 82 MPH sliders is that the company is really mixed. There are some like Yu Darvish and Brandon Beachy that have been really effective, while there are some like Derek Lowe's, Esteban Loaiza, Matt Morris, and Kevin Slowey's that are just awful. With that said, the slider (the one we are calling definitely a slider) has crazy horizontal movement. While we don't have park factors for Miami's park (it is really too new), it made me wonder if something is wrong with the Pitch F/X system there. It read the pitches that I am calling definitely sliders as having 10.95 inch horizontal movement. No right-handed starter has slider movement over 9. However, when I checked Mark Buerhle and Ricky Nolasco's year to year movement breakdowns, they didn't see a jump in 2012. So just anecdotally (and I saw the same thing when I compared the data of the other pitchers in the game to their 2012 data), it appears that the data is right and Fernandez is getting some wicked horizontal movement.

This could have quite a large effect on the platoon splits issue we mentioned above. The release point is a little more low and out than average and the change is a little slow, so whether or not he can get lefties out, even with his great fastball, is a legit question. However, if he has elite movement on his pitches, especially his breaking pitches, this could off-set a lot of these issues.

Overall, we see a 20 year old with one of the best fastballs in baseball. Not only that, but he has a repeatable release point that should give him adequate to average control (and the stuff is good enough to get him swings out of the zone, which lowers walk rates and heightens strike rates). There are concerns though, as his breaking ball and off-speed pitches seem to lag behind in velocity, but it isn't impossible to believe that these will develop further and with their good movement, be plus pitches in themselves.

This crude heat map gives you an idea of how Fernandez' approached lefties: 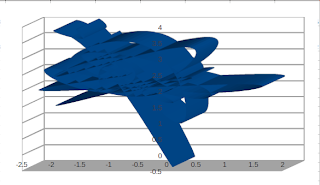 Fernandez clearly tried to pitch away and high. Ideally, I think you would want him to work low and away with his changeup, low and in with his breaking pitches, and high with his fastballs. Of course, we are talking about how a 20 year old is approaching hitters in the big leagues. Fernandez looks like a future ace, and for now, looks like a all-star caliber pitcher (whose numbers may be inflated a little this year because pitch counts won't allow him to face the opposing batting order the third time around many times). There is a lot to like, and the data, as small as the sample is so far, seems to only encourage more hype.
Posted by Unknown at 12:51 PM