Mark Sappington is the 8th best prospect in the weak (usually considered the worst minor league system in baseball) Angels organization according to Mark Anderson.

He gets that ranking with his big time fastball, that would be (by using his average fastball velocity in his Pitch F/X outing) in the top 8 % of relief fastballs in the Majors, closest to Wily Peralta and Josh Johnson pitching in relief. Adam Russell is the closest real reliever to Sappington. Comparatively, the horizontally fastball movement that he showed in the Pitch F/X outing was actually better than his velocity. The vertical movement was less elite, but still well above average.

His slider velocity is similarly, though not quite as, elite, in the top 17.6 % of sliders. However, he didn't show much movement with it, and it got a really weird amount of spin at times: 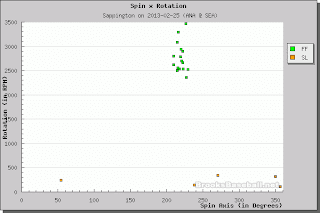 Most sliders don't have that much spin, in fact, it is hard to have more spin than that. When you look at some really good MLB sliders, such as Mark Rogers and Yu Darvish, you see that they do not get much spin on their sliders. Slider movement is not dictated by spin, as we see with Sappington, and more spin can actually make it a worse pitch. You see that one of his sliders had a normal amount of spin, but it was the others that had high spin. Maybe he just messed up 4 out of 5 times (though the weird release point differences were on his fastball). He is, after all, a young pitcher, a 2012 draftee in the 5th round. We didn't see Sappington's change that Anderson talks about in the article linked to above.

Sappington has a high release point (over 6 feet 6 inches on average) that probably helps his fastball sink (that is what Anderson believes,though again, it was the horizontal movement that was actually better than the vertical movement comparatively). It does come out quite a bit, over two feet most of the time. It was also inconsistent, which isn't surprising. The horizontal release point probably is one of the reasons that he gets so much horizontal movement on his fastball, and as you can see in his outing, he was working mostly middle to glove side. 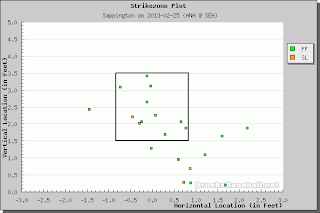 R.J. Alvarez is the 7th best Angels' prospect (a 3rd round pick in 2012, though that was the Angels first pick) according to Anderson, and has reportedly "touched triple digits". He didn't really get close to this in the outing, but he averaged 96.61 MPH, an even better fastball (hence the better ranking) than Sappington. Alvarez' fastball also gets very good vertical movement.

There is no list of a curveball for Alvarez from Anderson, but the breaking pitch he threw had (a lot) of top spin, so it is probably truly a curveball and not the slider Anderson calls it. The curve is about average in velocity compared to other relief pitchers in the Majors. He also has a changeup that we didn't see, but evidently it isn't good anyway. He releases the ball slightly under 6 feet, but at around 1.5 feet horizontally on average, it isn't sidearm by any means.

While his fastball is better than Sappington's, he doesn't get on top of the ball as well, and Alvarez' breaking pitches aren't as good as Sappington's. It is really hard to argue with that fastball though. Also, for what it is worth, he did keep his fastball low in his short outing, though that kind of fastball is probably best thrown high in order to get whiffs. His curveball was the pitch he threw high, but it is clear that he just lost the release point on it.

Matt Oye doesn't really fit in with the other two pitchers, as he isn't a ranked prospect in the system or much of a prospect at all in the traditional sense of the term. He is already 27, but he has good size at 6-5 230. He strangely got more starts than he ever had before in 2012.

His fastball velocity was closest to Dylan Axelrod and Brian Sanches, which fits into the bottom 15 percent of relief pitchers since 2007. He is clearly not a hard thrower like Alvarez or Sappington.

Oye does get good vertical movement on his fastball (the horizontal movement is a little weird, and sometimes in Arizona it turns out that way for some reason, so we will ignore it for now), similar to Pedro Strop, Kiko Calero, and Stephen Pryor, all whom have/had good whiff fastballs (even with some pretty extreme variance in velocity).

The only breaking pitch he has shown in Pitch F/X is a slider at 81.25 MPH. This is in the slowest 21 % of sliders. He also gets very little horizontal movement, and gets unconventional topspin on his slider. The traditional MLB AM tags does something much different in classification, perhaps because of this topspin, saying he threw one change and one curve. I doubt he throws an 80 MPH curve, just because pitchers that throw 80 MPH curveballs usually have harder fastballs than Oye has. However, it is hard to call them both changes, as they both moved so differently, both vertically and horizontally.

He doesn't release the ball high (just at 6 foot), but is not hardly out at all either, closer to his body than either Sappington or Alvarez. 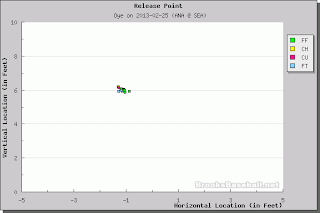 The consistency seems to show that he is much closer to pitching in the Majors than Alvarez or Sappington, which obviously isn't surprising. With some consistency and command, it isn't hard to believe that Oye would be able to get some hitters out in the big leagues in low leverage roles. He certainly doesn't have the ceiling of the previous two, but may be able to help the weak looking bullpen in 2013.