Of course, the first thing you notice is fastball velocity. He averaged 89.4 MPH, maxing out at 90.4 MPH, obviously well below average for a bullpen pitcher. However, this is the best we have seen Cordero since 2007. Back then, he averaged over 91 MPH on his fastball. Due to some arm problems, that fastball velocity cratered to 84.41 MPH in 2008, he didn't pitch in 2009, and got back up to 88.37 MPH in 2010. Unlike with Bonderman, the years off seem to have given Cordero a better fastball that he has in quite a while.

Of course, he only threw three of the 4-seam fastballs. Even though Brooks Baseball didn't separate his 4-seamer into different fastballs when he was still pitching in the Majors, MLB AM data did when they started separating 2-seamers and 4-seamers in 2010. The MLB AM data says Cordero mainly threw the 2-seamer in his spring training outing on Friday. This pitched got nearly as high as the 4-seamer (90.3 MPH), but on average was a couple MPH slower. With that said, he did get very good movement on the pitch:

You will notice though that he didn't get much movement on the slider. In his last decent year, 2007, Cordero's slider averaged 80.93 MPH. In his spring training outing, it averaged 80.05 MPH, almost a full MPH down. His slider was about average in horizontal movement and probably a little bit below average in vertical movement (though sometimes it is hard to tell thanks to misclassifications). 2007 data is a little harder to gather, but this slider from 2007 suggests that the pitch was moving more horizontally in 2007. 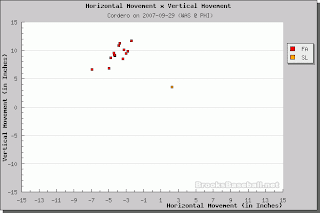 He threw 5 curveballs according to Pitch F/X in 2010, but he didn't throw any before then, and didn't throw it in his outing against the Mariners either. So this was probably a mistake in the system anyway, especially since the velocity was so similar to the slider (though the movement was much different). 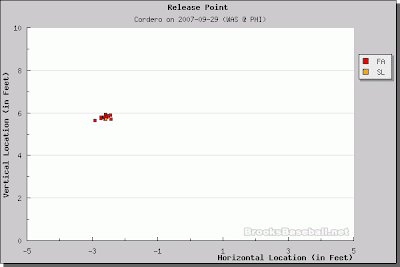 He also seems to have, although this is a bit more subtle, begun to release the ball closer to his body. 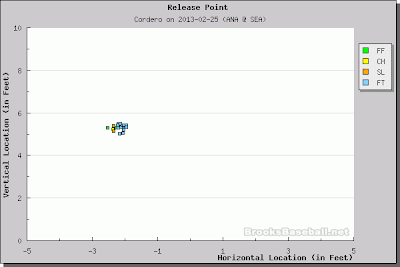 This creates a somewhat bizarre picture of Cordero's delivery, as you usually don't release the ball lower if you are releasing it closer to your body (it usually works vise versa). I do think that we can see the difference in a couple pictures I found in a quick Google Search (the first is from Rant Sports, and the 2nd from Orange County Register). First, here is Cordero as a Mariner in 2010: 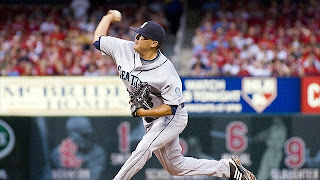 It hurts my elbow to see it at this angle (I think you could call this "arm drag", as the arm seems to be behind the body), but this looks like a 3/4 delivery. Here is a picture of Cordero pitching for the Angels: This is at a different point in the delivery, but it seems that the elbow is more down, less out, and he is releasing the ball a little more over the top, which meshes with the release point data.

This is usually a good thing, especially when it comes to platoon splits, but as a guy trying to make the team as an extra reliever, this may not necessarily be a good thing. For short term relievers, big platoon splits are actually a good thing, as it gives them a niche and role to fit in on the big league club. With that said, for a guy like Cordero, who has had major arm issues for several years now, the importance lies in delivery repetition. If the new delivery puts less stress on his arm, then it is successful, even if it erodes at his platoon splits a little.

Cordero also threw a changeup that we haven't talked about yet. In 2007, this was a small but existent part of his repetition, as he threw 6% of the time. If you look at the movement chart from the spring training outing, you notice that the pitch moves a lot like his fastballs, but in the game, was about 4 MPH lower (which is about 1 MPH slower than it was in 2007, matching the rest of his pitches in the velocity drop for the most part, above where it was after 2007, but below 2007 itself). You would usually like to see a difference in not only velocity, but more importantly I think, movement in the change and fastball.

While this comparison isn't really fair, look at the difference between Felix Hernandez' changeup and fastball in movement:

Felix has one of, if not the, best changeups in baseball. Even though he throws it over 89 MPH, and sometimes over 90 MPH, a 3 or 4 MPH difference from his fastball, it is so effective because it looks like the fastball, then moves differently horizontally and vertically than his fastball, and has more vertical drop than his sinker.

Obviously Cordero isn't trying to throw a changeup as good as Felix. As a reliever, the changeup, his 3rd (his 4th if you separate his fastballs) pitch, isn't that important, so the fact that it doesn't appear to be a very good pitch isn't a big deal. It is nice to have as many good pitches as possible though, especially if you don't throw very hard, and Cordero doesn't compared to other relievers.

This is spring training, so we shouldn't put much stock in results. This is good for Cordero, because his results were not very good. He gave up a homer to the first batter he faced, defensive shortstop Brendan Ryan. He didn't get a single whiff in his 20 pitches, and threw 11 strikes, which is a little low percentage wise.

At this point, it is early in spring, but it is a little hard to see Cordero cracking the Angels bullpen, even to start the year. The Angels bullpen struggled last year, but we have to be realistic when talking to Cordero. He is right-handed, has a long injury history, doesn't throw hard or even average, and at this point, doesn't look like he has a very good breaking or off-speed pitch. It is a good story, but he will probably start in AAA. If he stays healthy, finds his slider again, and pitches well in the PCL, then it is possible you will see Cordero in the Majors this year, but as is the case in all comeback attempts, the odds are stacked against him.
Posted by Unknown at 4:16 PM