The Decline of Ryan Howard

Ryan Howard has declined from one of the game's best power hitters into what has basically become, especially when one considers the contract, a laughingstock. His walk and home run rates have dropped significantly and because of his defensive, baserunning, and positional values, has become basically a "replacement" level player that is playing every day. I wanted to see if we could visualize Howard's decline beyond just the numbers, looking at average locations in Pitch F/X data, and spray charts (the latter courtesy of Brooks Baseball). So I will break down Howard by year, starting with 2008 as that is the first year to have complete Pitch F/X data (the charts are often best viewed by clicking on them).

Pitchers were pitching away from him, and it was the slowest and lowest pitches he was swinging and missing at, nothing real unusual for a power hitter. 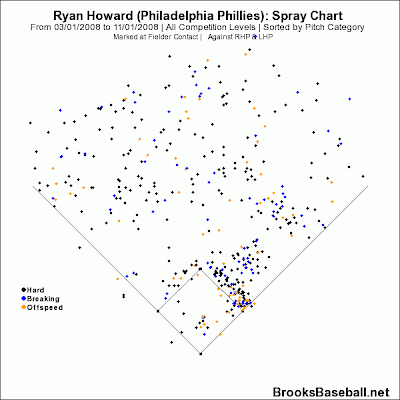 A lot of "hard" pitches hit to the outfield the other way, pulling a lot of breaking and offspeed stuff (with some hard stuff as well).

The whiffs are even slower and lower, with the runs being higher in the zone, but a little slower. This is the best year we are looking at, at least by Rbat. 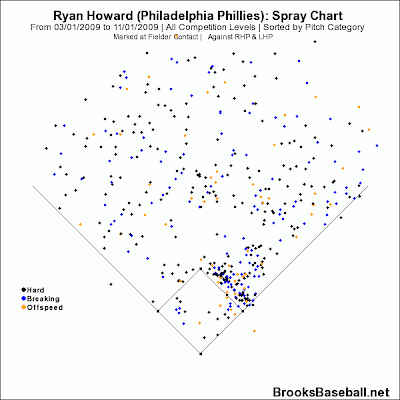 Other than just a few balls just hit much further, the home run chart seems the same. It seems that there were less fastballs taken the other way, with more breaking pitches hit that way.

There were less whiffs, but they are basically the same in velocity and location. Even though his power was lower, he was more of a high ball hitter that season. 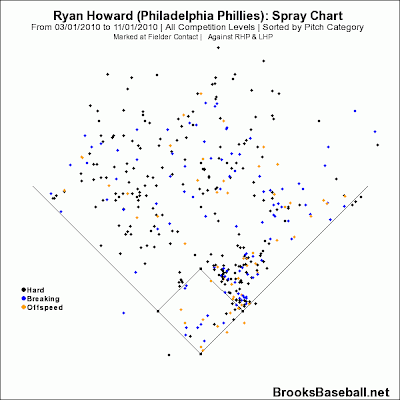 Almost no infield outs the other way, but much less pulled balls to the outfield. His average contact were on harder pitches, which may be why. He may have just had less of a chance to pull them. There are basically no fastballs pulled to the outfield.

For the second straight year, he traded some power for less whiffs and had another good season. The whiffs this season were a little more, and a little harder. It still broke down where the harder pitchers were the ones he hit and more success on while the slower ones were the ones he missed. 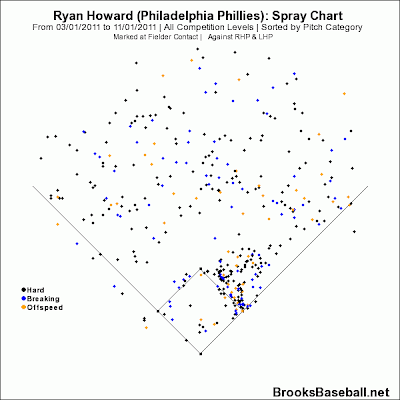 It seems he pulled the ball a little better than he did in 2010. A pretty balanced outfield spray chart

Whether it was the ankle, age, or something else, this is when Howard really regressed. 2008-2011 Howard was roughly the same hitter in value, even though he did it differently in 2010-2011 than he did in 2008-2009. His whiffs were harder this year again, though everything was harder as there were just more pitchers that threw harder, and this time they were further away. The no out plays were the closest to the center of the plate on average than anything we had seen so far. However, the runs returned to being the highest, just like in 2008-2009, though everything shifted down. He missed more low pitches, and hit less high pitches. 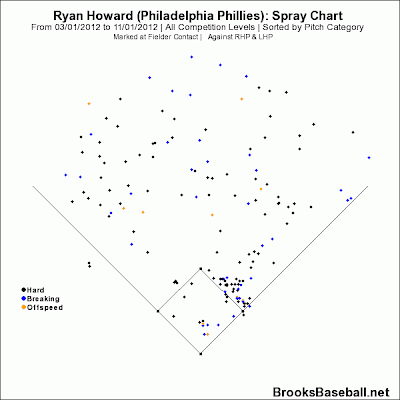 You have to adjust for there being less batted balls just because he played in less games, and when you do that, it is hard to really see a real difference in where he was hitting the ball on average. 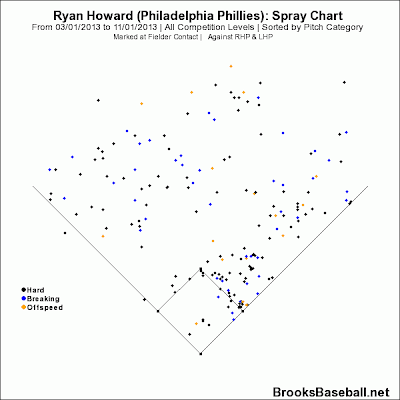 He hasn't been hitting really any balls between the right-fielder and center-fielder, and most of his pulled balls are not hard pitches. Most of those are hit the other way (along with breaking pitches, which makes sense, as most breaking pitches are thrown to the glove side of the plate by pitchers that have the platoon advantage, meaning they would be on the outside to Howard or any hitter).