Does Francisco Rodriguez Have Trade Value?

According to recent trade rumors, the Brewers have been shopping Francisco Rodriguez and several teams are interested him. After his 2012 struggles, off the field issues, and the fact that he had to sign a MiLB contract, him having any real value is somewhat surprising. However, he has been good statistically this year, with a 69 FIP - and a 27.3 K% in 19.2 innings (20 outings).

I'll look at Rodriguez' 2013 so far, comparing it to his 2012 struggles, along with his successful 2011 season, and his 2008 season with the Angels for further reference, a season, which by fWAR, he hasn't repeated since, in order to see if Rodriguez' good start is just a small sample size, or whether the data suggests that he has returned to form and become a valuable trade chip.

First, to get a look whether or not he has "changed" as a pitcher, here are Francisco Rodriguez' release points by season.

So far this year, Rodriguez is releasing the ball higher than he ever has before. In 2008, he was releasing the ball further out than he is now, actually moving closer to the center of the rubber as he declined. While release point consistency proved to be overrated in testing, and it is nearly impossible to look at release point consistency over a full season due to the difference in how it is measured from ballpark to ballpark, we can compare Rodriguez' 2012 and 2013 and see if he is being more consistent or less consistent 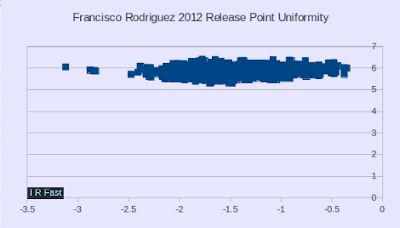 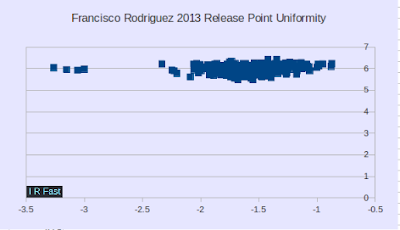 There are less pitches this year obviously, but it seems hard to see any difference in consistency. What about how he is locating pitches?

While he is throwing less glove side than last year, he is still throwing glove side on average, something he didn't do in his successful years of 2011 and 2008. So which pitches are drifting more glove side for him? He is basically a 3 pitch pitcher (4 if you split his fastballs, which I don't for the post), so we will start with fastballs

The fastball was more glove side in 2012, and he has moved it closer to arm side on average in 2013 (but still not where it was in 2008 and 2011). His fastball velocity is a little weird, as he was throwing his hardest in 2008, but the 2nd hardest in 2012. His fastball velocity has regressed back to closer where it was in 2011, a successful season for him. Why he had success with it in 2011 despite the velocity must be from location, but the struggles in 2012 despite the good velocity and the success in 2013 despite the bad velocity, if you trust the MLBAM tags, could be the usage of the 2-seam fastball. In 2012, he threw a lot of 2-seamers, and it was a really unsuccessful pitch. So far in 2013, MLBAM tags have him no longer throwing this pitch. 2-seamers usually don't move glove side, so I don't know if that explains the location difference or not.

There is no real velocity difference from year to year, and other than his 2011 blip, he has located it glove side on average. So we don't really get any conclusive results here, so what about his changeup?