The Futures Game provides a lot of deserved excitement every year, as many of the league's best prospects play on a national stage, giving the average viewer a look at prospects they wouldn't otherwise get. Of course, the most interesting aspect of the game, at least in my opinion, is that the game is tracked by available Pitch F/X data. In this post, I'll start by taking a quick sweeping look at the data and comparing the pitchers by location, release point, and velocity.

Here are what the average release points for each pitcher in the game looks like in graph form:

A.J. Cole's extremely out release point stands out. He has been effective against both lefties and righties this season, but it seems to be something that I would call concerning or at least notable. With that said, it is a release point similar to Max Scherzer and Drew Hutchison, so it can work if he has the stuff to back it up. Anthony Ranaudo comes with an extremely high release point, which is a product of his extreme height (standing at 6-7). This gives him really good plane on the ball. On the other hand, Rafael Montero has a pretty low release point. I found this picture that shows just how low he gets in his delivery: 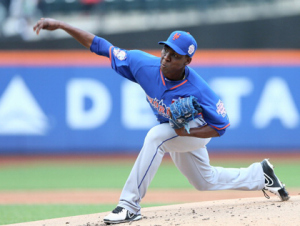 This is why he has the low release point, his arm seems to be behind his delivery, as he is finishing striding forward and his arm is still coming through.

Here are where the futures game pitchers located on average, regardless of pitch classification, just to give us a general idea of where they were throwing the ball (the entire graph is the strike zone):

It should be noted that both Yordano Ventura and Jimmy Nelson each had just one pitch tracked by Pitch F/X, so their data doesn't tell us much. Eduardo Rodriguez worked the highest in the zone, though fellow left-hander Jesse Biddle  is an honorable mention, working much more arm side. Rafael De Paula, Carlos Contreras, and Noah Syndergaard all worked slightly glove side on average, while Andre Rienzo and Kyle Crick worked rather extremely glove side, and Crick barely through a strike on average. He had the lowest average pitch, speaking to some control problems he had during the game.

Michael Ynoa and Archie Bradley worked arm side pretty heavily in the game, while Enny Romero threw extremely low in the zone. For perhaps a better look, here are the pitchers' located their fastballs (4-seamers or FF tags by MLBAM, there are a couple of erroneous FA tags in the game, which I didn't include in this graph) on average

Other than Ventura's one fastball, the race for best fastball is really close, with Kyle Crick, Enny Romero, Taijuan Walker, Noah Syndergaard, and Eddie Butler all within half of a MPH on average. It seems that many of the pitchers had problems using the fastball on both sides of the plate, working arm side too much. Also, several of them worked low on average with their fastballs, which isn't what you want to do with plus fastballs because it isn't how you get whiffs.

How much of this is a product of overthrowing and pitchers being used out of their regular roles (coming in and having one hard throwing inning instead of making a start) is unclear, but it probably has some kind of impact. Since these are some of the top prospects in baseball, it isn't surprising to see a bunch of elite fastballs, making Jesse Biddle and C.J. Reifenhauser standing out like sore thumbs for their average to below average (considering it is a relief appearance and the velocities are bumped up by Brooks Baseball's release point difference) fastballs.
Posted by Unknown at 1:35 PM