Michael Crotta signed with the Nippon Ham Fighters in the NPB for equivalent of $500,000. A 6'6 30 year old right-handed pitcher, Crotta pitched in the Major Leagues in 2011 for the Pittsburgh Pirates, the team that drafted him in the 17th round in 2006 out of Florida Atlantic University. The short stint didn't go very well, as he gave up 11 runs in 10.2 innings. He then didn't pitch at all in 2012 thanks to a terrible elbow injury.

Crotta spent the entire 2013 season on the Nationals' AAA team, pitching only in relief and statistically, not a whole lot stands out. He had a 3.57 ERA, with a 17.2 strikeout percentage and walk percentage of nearly 10 percent. However, I thought it was worth looking further to see what the Fighters might see in Crotta.

Despite the injury, his delivery has remained virtually the same. Here is a look at what his delivery looked like in 2010: 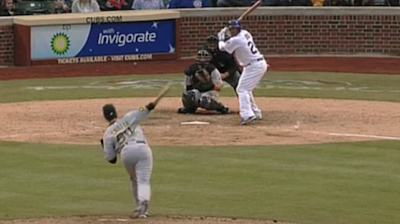 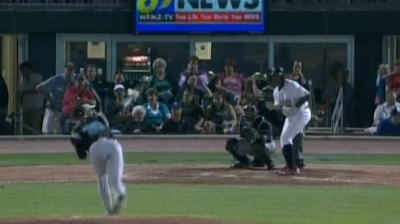 The Lehigh Valley gun on MiLB.tv tends to be slow, but I checked the last time he pitched at the park (one of the few MiLB broadcasts with on screen radar guns) and Crotta was throwing 95 MPH with some armside tail. He occasionally kept it high, but would really bust in on a right-hander's bat, seeming to use the two seam like Japanese pitches often use the two seam, trying to get inside rather than throwing it to opposite platoon batters to keep it outside. He can get occasional sink glove side as well and didn't give up a homer all year, so it doesn't seem that staying over the middle of the plate was a problem. He was up to 96, with very consistent velocity, throwing mostly 94 the next inning.

The other pitch Crotta showed was a 84-85 MPH slider. He perhaps had some problem getting on top of it, with mostly downward movement. It was mainly used against lefties, against an occasional righty (though it stayed arm side). It did not appear to be a splitter or change and didn't appear to be a very good pitch. Against impatient hitters when he gets it somewhat down it can be a groundball pitch.

In the Majors, Crotta didn't throw near as hard, averaging under 93 MPH. The MLBAM tags and the Pitch Info tags disagreed whether he threw mainly sinkers or mainly four seamers, but they agreed that he threw a slider as his main breaking pitch and just one changeup. I definitely saw two different fastballs in my short look, but I would probably label them two seamer and sinker.

In my previous article I looked at how NPB teams targeted height and velocity, and the Fighters were above average at possessing both. Crotta is a great example of a guy possessing both, almost at an extreme.

You do wonder if he is going to miss enough bats to be a successful back of the bullpen pitcher in the NPB, where getting strikeouts can be difficult. The track record and breaking pitch do not suggest he will rack up many strikeouts, but the fastball velocity might. If he can work a little higher in the zone, and still throw 94-96 MPH, he will get plenty of swings and misses.
Posted by Unknown at 5:30 PM