It would be nice to have labels for those pitches, so here are the average release points for all 110 pitchers that pitched in Pitch F/X games in the Arizona Fall League. 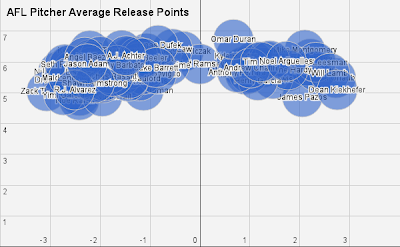 
Of course, like with pitch movement, release point data in Pitch F/X is subject to park factors, as it is measured slightly different from park to park. The AFL parks showed significant bias in movement data, so we would expect to see the same in release point data. So using the same method, we can see if there is biases from the individual pitchers that pitched in both the AFL and the MLB this season. 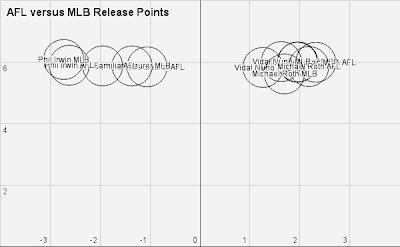 For all three right-handers, we see basically the same height, but the AFL data brings them closer to the center of the rubber.  For the lefties, 2 of them are brought further away from the center of the rubber, in the same direction, while Vidal Nuno stands out as an exception. Of course, if just one of six are different, it could have been a conscious decision by Nuno to slightly move on the rubber. The difference doesn't seem to be drastic, but there is probably some shift to the right (catcher's perspective) caused by the AFL Pitch F/X measurements.
Posted by Unknown at 5:36 PM