Eventually what you want to be able to do with Pitch F/X data is to evaluate players. I have been looking at Pitch F/X data in the 2013 Arizona Fall League from several different perspectives, but have yet to look at isolated individual players. In this post, I wanted to look at a couple of notable hitters, not highly rated traditional prospects, but a couple of players I think are interesting, and see what the Pitch F/X data says about their tendencies during the AFL season (and perhaps, their offensive game as a whole).

Japhet Amador is 26 year old former Mexican League slugging 1st baseman signed by the Astros late in the 2013 season. Amador is most known for his weight, but he had some impressive seasons in Mexico. He
saw 160 pitches measured by Pitch F/X in the Arizona Fall League 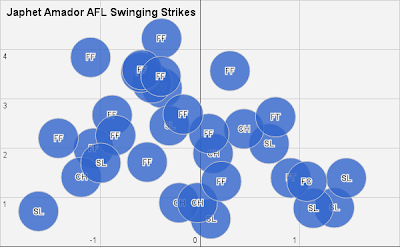 Amador is a right-handed batter, but their appear to be plenty of whiffs on both sides of the plate for him. There were also several high inside fastballs that Amador swung and missed at. So perhaps he is struggling with velocity, but let's continue to look at locations and start to focus on the good things he did in the AFL measured by Pitch F/X. Here are his 4 home runs. 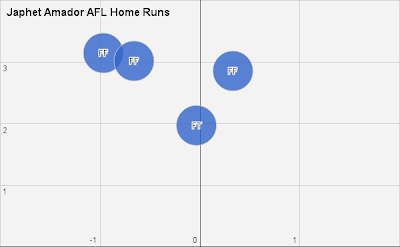 Up and in is also where Amador hit a couple of home runs, as well as missing some pitches. It is worth noting that Amador appeared on the list of hitters that hit a homer in the same at-bat they had a swinging strike. It would seem that pitchers could throw it there effectively at times, but Amador could strike there successfully. How about all of Amador's batted balls? 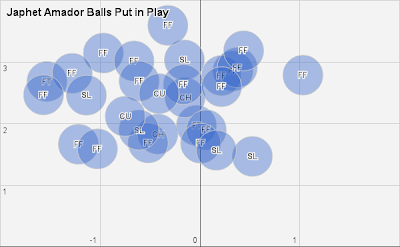 Amador was able to put balls in play when they were inside, and preferably up. Pitches away, especially low and away, were almost never put in play by Amador. To illustrate the differences, let's look at his average locations. 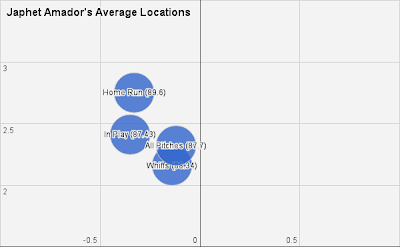 While his average home run was on pitches that were harder than the average pitch, just as we saw in the home run graph, his average whiff was on pitches harder than the ones he put in play. His whiffs were much lower as well, and he hit balls inside better than outside. He was pitched slightly inside on average, something I have chalked up to inexperience and lack of control in previous AFL posts, and if he played in the Majors, we would expect to see more pitches outside. This could really hurt Amador's chances of hitting, as he doesn't seem to hit these pitches. Checking on whether or not he struggled with velocity, I checked the 4-seam fastballs he saw, all 90 by Pitch F/X, and saw that the average one he swung and missed at averaged 93.98 MPH, while the ones he put in play were 90.67 MPH, making it seem that he was dramatically affected by velocity in fastballs. The four seamers that he fouled off were 92.69 MPH on average, and the called strikes were 91.54 MPH, while the balls were 92.15 MPH on average.

Moving on from Amador, I wanted to take a look at someone who had a home run explosion in the lower minors (32 homers in all in 2013) for the Rangers system, Ryan Rua. Rua saw 228 pitches measured by Pitch F/X in the Arizona Fall League, 28 of them for swinging strikes. Here are were they were located, labelled with MLBAM tags: 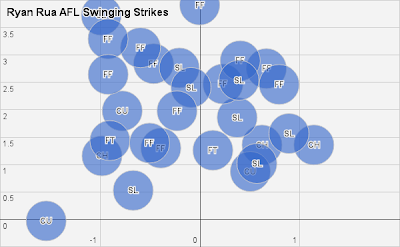 Rua is also a right-handed hitter, so the low breaking balls to the right are actually inside, which is strange. While there are some low balls on both sides, and two pitches higher than the strike zone, almost all of these pitches are actually in the strike zone. Like Amador, Rua hit four home runs that were measured by Pitch F/X. This is what they looked like: 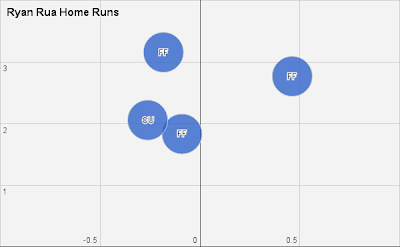 All four are obviously in the strike zone, and are roughly middle height, three of them inside, one outside. Let's look at all of Rua's contact plays in context of location and the opposing pitcher's release point. 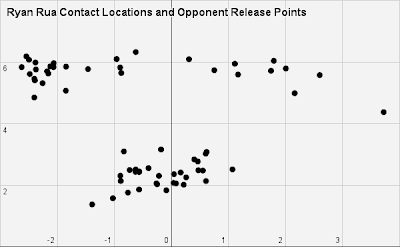 Finally, here are his average locations to give us a better idea of his hitting tendencies in the AFL 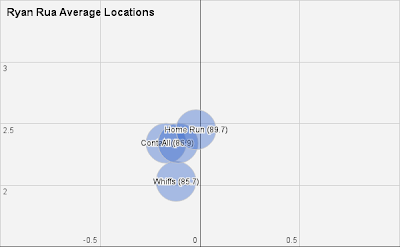 Obviously the homers are higher on average, but interestingly they were further away on average as well. His contact came on pitches slightly closer to him than the average pitch, while his whiffs generally came low. While his home runs were on harder pitches than average, both his contact and whiffs were on slightly slower pitches, with his whiffs being slower on average. It would seem that he can hit for power if you get the pitch up and over the plate, while you can still throw inside on him, low preferably, and get him to swing and miss.
Posted by Unknown at 9:23 AM