Moving along from just looking at a pitching perspective when it comes to Pitch F/X data in the Arizona Fall League, I wanted to take a basic look at the batting results in the Pitch F/X game from a hitter's perspective. In the next post, I plan to take a look at the results from a more individualist standpoint, but for now, I'll look at results as a whole. The simplest way to start this seems to be by looking at all the swinging strikes in the AFL Pitch F/X games, labelled by MLBAM pitch type: 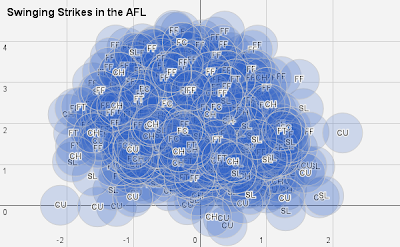 There isn't a lot of surprising things here, fastballs are more likely to be swung and missed at high, curves and changeups low, and sliders low and side to side. 2-seam fastballs (FT) are usually low or in the middle of the zone when they are swung at. There are some exceptions of course, as I see a couple of high sliders, a high cutter, and a high changeup on both sides.

When looking at home runs, the pitches are high in the zone, with really only one "low pitch" hit for a home run. 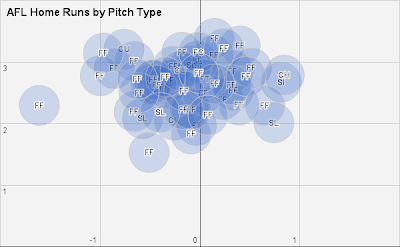 Obviously there is a lot of fastballs, but there is a hanging high curve, some sliders that didn't get real low, and a hanging changeup. Below is the same graph, but labelled with the names of the hitters instead of the pitch types: 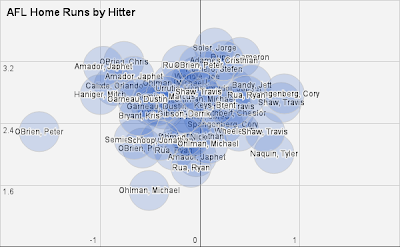 Peter O'Brien, a Yankees C/3B prospect in the lower minors, managed to hit a homer that wasn't even a strike, while Ohlman had the low home run. The highly paid Cubs' prospect Jorge Soler had the home run on the highest pitch, while Mexican Leaguer turned Astro Japhet Amador had an honorable mention (as did Peter O'Brien).

Infield fly balls is something that I think has been getting too much attention in the sabermetric community in the last couple of years, but it is something that is interesting since they are almost always turned into outs. GameDay labels them "popups", and here are the locations and the pitch types of each one measured by Pitch F/X in the AFL in 2013. 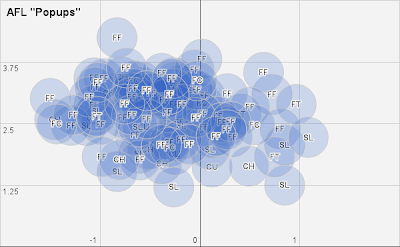 Most of them are on fastballs thrown up and in to right-handed batters, which I don't think is surprising. There appear to be some breaking balls thrown away from right-handers that turned into popups, most likely pitches that the batter tried to pull (you wouldn't think a left-hander would pop up a low and inside breaking ball).

Groundballs are much easier to measure, and usually more predictable as a repeatable skill, but the problem is that there are more of them. This makes the graph a little messier, but here are the groundballs turned into outs in the AFL by Pitch F/X data: 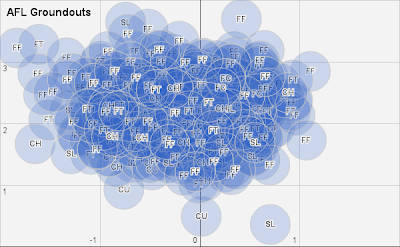 Here are the average locations of the 4 main GameDay results: 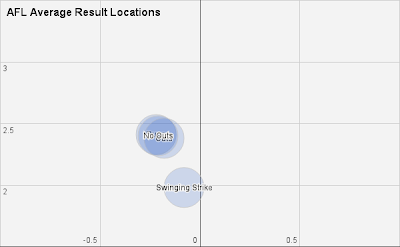 On average, there is no real average difference in location between outs, no outs, or run scoring plays. This suggest that most of the actual results off the bat were BABIP or randomness driven. Swinging strikes on the other hand, were thrown lower in the zone and a little further away from right-handed hitters.