So far in the look at Pitch F/X data in the Arizona Fall League on this blog, I have looked at the location of pitches, velocity, and even how balls and strikes were called in the league. In this post, I want to look at the movement of pitches, and first, let's look at a graph showing all the pitches thrown measured by Pitch F/X in the league, in the context of horizontal and vertical inches of movement: 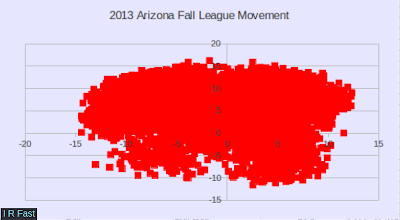 Some of the more notable pitches (catcher's perspective):

Far to the right but no real vertical movement: Kyle Simon SL

Far to the left with no real vertical movement: Noe Ramirez FT

Most negative vertical movement, some horizontal movement to the left: Jason Adam CU

Most negative vertical movement with horizontal movement to the right: Henry Garcia CU

Of course, the biggest problem with using Pitch F/X movement is that it is often measured differently from park to park. That is, it is hard to compare pitchers from different teams using Pitch F/X movement because of all the biases in the data. The Arizona Fall League/Spring Training facilities are notorious for having some movement biases different from "normal" MLB parks. With this in mind, and using the MLBAM tags, this graph compares the average movement of each pitch type (just the major ones, I left out sinkers, splitters, etc.) in the AFL versus the MLB:

We see that the majority of pitches are shifted up and to the left in the AFL, meaning there is a higher vertical number and more negative horizontal number in the AFL data on average than in the MLB.

Of course, this may be because of the pitchers' themselves. Perhaps there is a different ratio of righties and lefties (which affects movement data) or the pitchers in the AFL on average just have different movement than an average MLB pitcher. Luckily, there were a handful of pitchers in the AFL in 2013 that also have pitched in the MLB. Using just their FF (I used the FA from FanGraphs for their MLB data) tags, we can compare how their fastballs "moved" in the AFL versus the MLB:

Almost without exception, we see the same trend, to somewhat varying degrees. It seems safe to say that AFL vertical movement numbers are too high above 0, and too close to negative numbers.

However, I think we should look at movement data from the individual pitchers on the AFL's Pitch F/X data's own terms, so below are graphs on the four seam fastball, slider, curveball, and changeup split between horizontal and vertical movement, labelled with some notable pitchers. 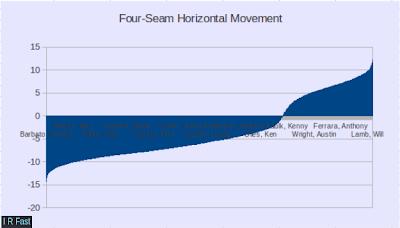 Johnny Barbato is a Padres' right-handed reliever that was drafted in the 6th round in 2010. In 2012 in A-ball, he was very effective, and matched the peripherals in 2013 in A+. His fastball had better vertical movement than Alex Meyer. What about vertically? 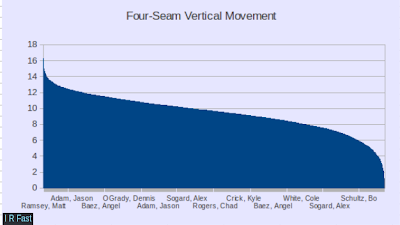 Ramsey and Adam show up again. What about sliders? 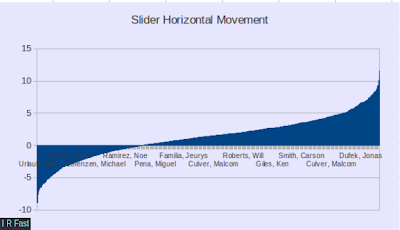 Malcom Culver is a 23 year old reliever in the Royals' system coming off a nice year in A+. 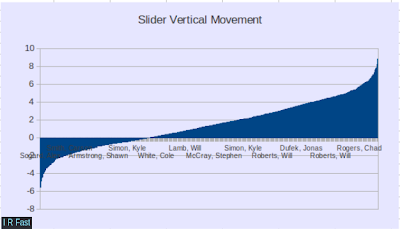 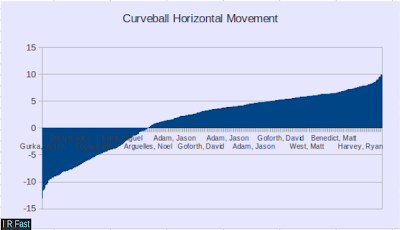 Ryan Harvey is a Rangers' 2012 18th round pick that, despite a large volume of walks, pitched relatively well in relief in A+. Vertically, we see that some curves, perhaps those of Mike Morin, were misidentified sliders. 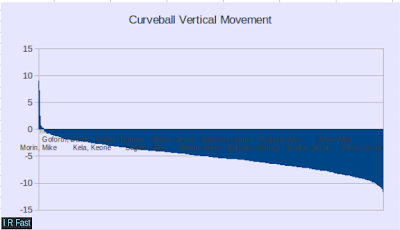 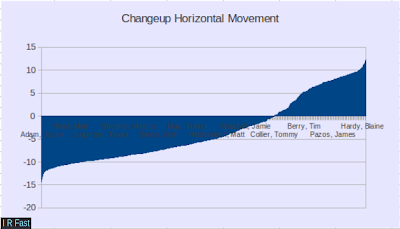 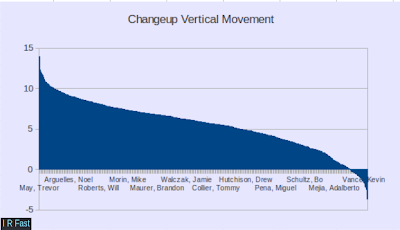 Trevor May, the former highly rated Phillies prospect that was a part of the Ben Revere trade appears with Royals' Noel Arguelles, a high bonus pitcher that has struggled with command.
Posted by Unknown at 7:20 AM