In the previous post, I looked at general batting results and locations. In this post, I wanted to look at more individualized results, seeing if the data will tell us something about each individual batter.

First, let's look at how each batter was pitched by average locations: 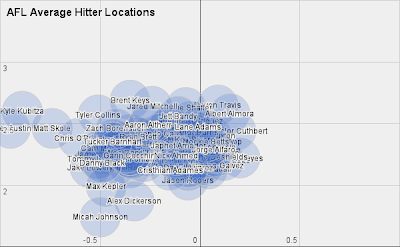 I am surprised at the concentration of pitches and where they are located. Right-handers were pitched inside on average, which is surprising. However, this matches the average location data we saw with the pitchers, so this could just be right-handers struggling to get the ball glove side. This seems to a mark of a struggling or young pitcher, at least that is what other cases suggest. The White Sox' Micah Johnson, and Alex Dickerson, just acquired by the Padres were pitched extremely low, while Tyler Austin, a top prospect with the Yankees, was pitched extremely inside.

Now that we have seen where the batters were pitched, let's look at the average locations of their whiffs: 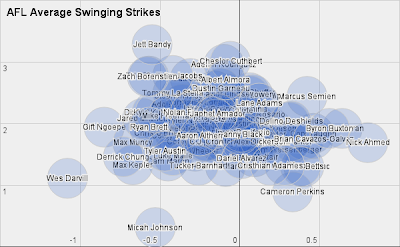 As you can see, the graph has shifted to the middle of the plate on a whole. This suggests that the batters were pitched inside on average, but were more likely to swing and miss at pitches away, something we saw in the previous post. Nick Ahmed, the dazzling defensive shortstop with the Diamondbacks, swung at missed at a lot of pitches away, while Johnson and the Phillies' minor leaguer Cameron Perkins struggled with balls low. Wes Darvill of the Cubs is a left-handed hitter, so he also struggled with pitches low and away. The Angels' Jett Bandy bucked the trend by struggling with high pitches.

With this in mind, I wanted to look at the worst pitches that batters swung at, that is, the pitches furthest out of the zone, starting with the highest pitch swung at: 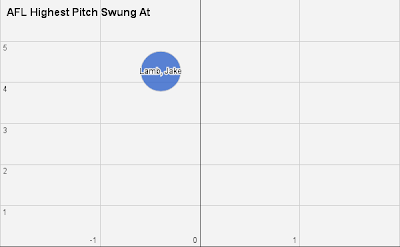 This is not quite a full foot out of the zone. Lamb was a 6th round pick by the Diamondbacks in 2012 out of the University of Washington. He is a 3B/DH that has only played in the lower minors so far, but he has a manageable K/BB and has hit for a high slash line all the way around. AA may be a test for him, especially if he is consistently this impatient, but the numbers are good so far. 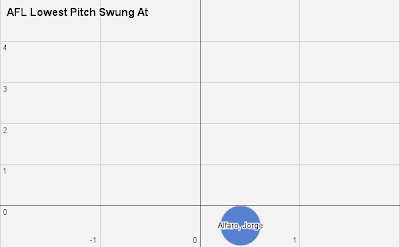 Alfaro is one of the Rangers' best prospects, and he has a reputation for being quite the free swinger, here swinging at a pitch that bounced before it reached the plate.

Furthest to the Right (catcher's perspective): 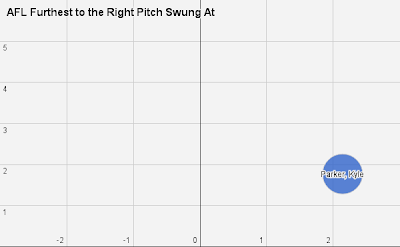 Parker has posted good numbers throughout the minors, including AA, since being drafted out of the first round by the Rockies after a football career. However, there does seem to be some concern about swing and miss, and here the right-hander swung at a pitch a foot out of the zone away.

Furthest to the Left: 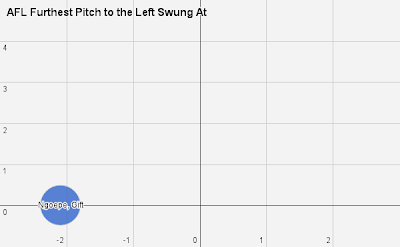 Gift is interesting because he was signed out of South Africa, but the numbers haven't been very good, and he really struggled in AA in 2012. Here, the switch hitter swung at a pitch that was a foot off the plate, and in the dirt, which I think is indisputably the worst swing of the AFL Pitch F/X games.

Of course, looking at some positive things can be helpful as well, and we looked at homers in the previous post, so let's look at the other two extra base hits, starting with all the doubles in Pitch F/X games in the AFL, marked by location and labelled with the hitter of the double: 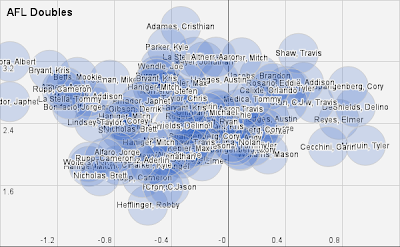 Cristhian Adames, a 22 year old with the Rockies who struggled in 2013, hit the highest double, while Robby Hefflinger, a former 7th round pick by the Braves, hit a double on the lowest pitch. Japhet Amador and 2012 Cubs 1st round pick Albert Almora hit doubles on pitches that were up and in and balls. Kyle Parker swung at a bad ball in an above graph, but he also hit a double on a borderline strike on this graph.

Triples are much more rare, so this graph is much cleaner, but there are no repeats, so it is difficult to guage any kind of predictability: 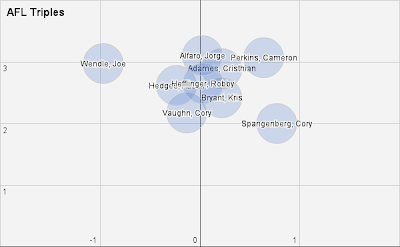 Other than Spangenberg, who hit a low and in pitch for a triple, the triples came on pitches in the middle part of the plate or high. It is interesting to see Alfaro here, hitting a high ball for a triple despite being a catcher. Austin Hedges is also a catcher, and Kris Bryant is hardly known for his speed, making triples as "doubles with speed" a misnomer.
Posted by Unknown at 10:43 AM