Taking a break from looking at batting results, I wanted to take a quick look at another subject that has been very important in recent Pitch F/X research, pitch sequencing.

I think a good way to start is to approach sequencing the same way I did, looking to at-bats that contained both a whiff and a home run, meaning that the pitcher was able to make the batter swing and miss on one pitch, only to give up a home run later in the at-bat. There were 6 such at-bats in the AFL Pitch F/X games: 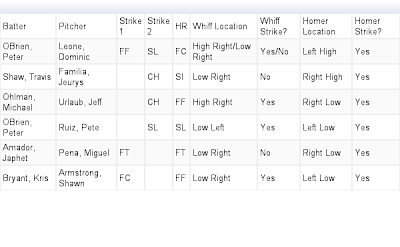 4 of the 6 at-bats that had swinging strikes and home runs ended with batters getting a different pitch than the ones that he swung and missed at. As far as general location goes, we see the same ratio, two of the six got pitches in the same area. Japhet Amador got the same pitch in a similar area and hit it for a homer, but the difference was that the first one was out of the strike zone. O'Brien got the same pitch in the same area against Pete Ruiz, both in the strike zone, and he didn't miss the second one.

The Peter O'Brien/Dominic Leone at-bat is fascinating because Leone managed to get O'Brien to swing and miss at two different pitches, one out of the zone and one in the zone, and then threw a third separate pitch in the strike zone, in a different part of the strike zone, and it was hit for a homer. Here is a location graph showing the three pitches: 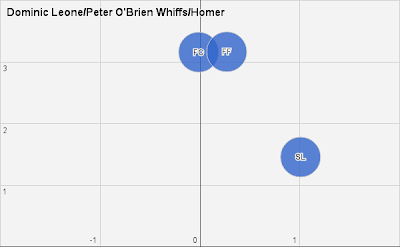 As the first chart shows, the cutter high and in the middle of the strike zone was the ball hit for a homer. The fastball thrown slightly away was missed at, and the slider was low away, not technically in the strike zone, but close.

Of course, the at-bat actually lasted 8 pitches, so the three pitches above were just a small, though dramatic part, of the battle at the plate. Here are where all 8 pitches were located, labelled with the MLBAM tags of the pitches, along with the amount of strikes there were at the time the pitch was thrown: 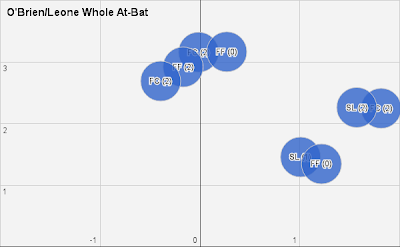 Leone threw fastballs early in the count, both away, one high and one low. After getting a strike on O'Brien, Leone threw the slider that got him a whiff to get the count to two strikes. O'Brien then bore down and fouled off four pitches, a slider and cutter away (perhaps both sliders), and a fastball and cutter high and slightly inside. This is when Leone kept the ball over the plate and O'Brien hit it for a homer.

Of course, we want to look at larger sample sizes, and look at more results than just home run at-bats that also contained whiffs. So here we will take a look at strikeout at-bats, breaking them down by what pitches were thrown by the amount of strikes in the count.

Here are all the pitches in Arizona Fall League Pitch F/X games in 2013 that were either called a strike or swung and missed at in at-bats that ended with a strikeout. First, here are the pitches that were thrown with no strikes: 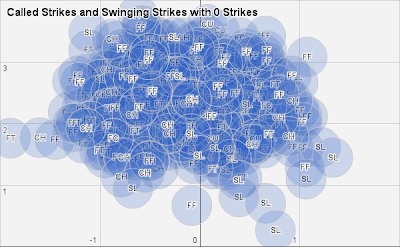 To spoil the two below graphs, while there are some sliders on the fringe here, we are mainly looking at pitches in the zone, with a stronger concentration. Pitchers are using their fastballs to get ahead in counts fro the most part. 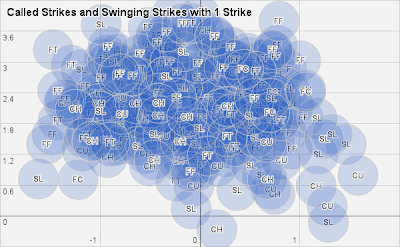 Here we see a lot more curves, with some more changes and sliders as well, we also see a lot more pitches off the plate horizontally, especially on the left side. Middle of the plate and high out of the zone seems to have a higher glut of pitches as well. 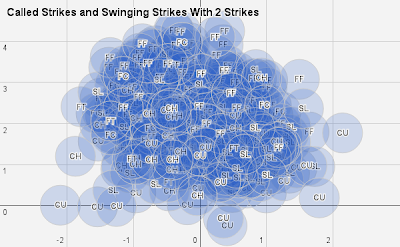 There are more pitches everywhere, whether buried in the dirt, extremely high in the zone, or to the left (still not a great glut of pitches to the right, which is where you should throw your pitches to a right-handed hitter, but again, this could be youthful pitchers). There are also more changeups in the zone.

In case the graphs do not show it, here are the average locations in strikeout at-bats, broken down by how many strikes there were at the time the pitch was thrown: 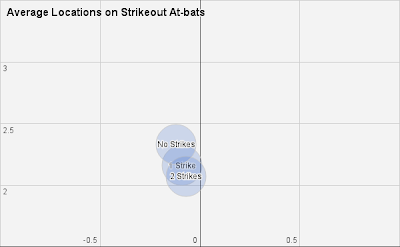 Not surprisingly, when pitchers in the AFL got to two strikes, they tended to throw more breaking balls, which are lower in the zone on average. Surprisingly, there isn't much of a difference in horizontal location.
Posted by Unknown at 10:32 AM