The Pecos League is perhaps the least known independent league, and at the same time, my favorite independent league because of the offensive environment. In 2013, the average Pecos League team averaged just short of 8 runs a game. Before last season, I can recall at least two pitchers (and there were probably more) signed out of the league into the minors last year. While scouting will always trump statistics in situations like this, I thought it would be helpful to add a little context to the league when looking at individual players (for this post, it will be pitchers). The 2013 season is already over, about a 66 game season.

To do this, I will use kwERA, which I think is helpful when looking at extreme offensive environments (which is why I use it to look at NPB pitchers, especially 2011 and 2012, when the league was extremely pitcher friendly). League average kwERA in the Pecos League is 4.68, higher than any league I have ever seen, but a much more manageable and believable number.

Park factors are impossible to do with the information we have, since there are not enough seasons to have a good sample size, teams have changed, and it doesn't appear that there are home/road splits available. Luckily, kwERA shouldn't be affected in a large way by park, so I just won't do any kind of park or team adjustments. However, league and team constants may be useful, so below I looked at the league average home run and BABIP numbers for each year from 2011 to 2013 in the Pecos League. Below that is the home run percentages for each team in the Pecos League (remember that some teams have not played all 3 years in the league, either being added later, or folding), with their pitching and batting numbers combined. This isn't good enough to use for anything other to provide a little possible context, as it is perfectly believable that a team, even with the massive turnover in the Independent Leagues, could have good pitchers and bad hitters all three years. 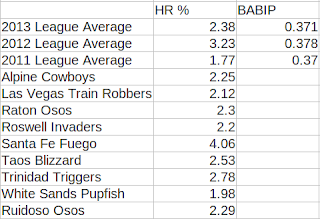 So their has actually been huge HR % swings from season to season, but the BABIP has stayed roughly the same when it comes to league average. The BABIP is a really high number, suggesting that, especially with the 2011 and 2013 home run rates, that most of the runs are coming from balls that stay in play but are not turned into outs.

About 25 percent of the runs in the Pecos League are unearned (in 2013), compared to about 8 percent of runs in the Majors this year and about 10 percent of runs in the Pacific League in the NPB. Whether this is just because of terrible defense or aggressive score keeping would be impossible to prove. However, it is something you have to consider when looking at the league statistically. So in the list of pitchers below, I included runs allowed per inning (instead of per 9) along with ERA and kwERA. I also kept the pitchers' seasonal ages according to Baseball Reference because that is relevant when looking at pitchers. I only looked at pitchers with at least 50 innings pitched, and I didn't distinguish starters from relievers and I also included their HR % allowed (to compare to league average and team rates). When looking at the home run rates above, it isn't surprising that the city of the largest home run rate has an elevation of about two thousand feet higher than the city with the lowest home run rate. So here are the numbers for the qualified Pecos League pitchers, sorted by kwERA:

The top three guys are all pretty young, at 22 to 23 years old. Austin Carden was not drafted, pitching out of Rhodes college. I believe he was a senior in 2012, as the school only has stats for 2013 available and he wasn't on there. He also pitched in the American Assossation for El Paso and struggled in 6 games. Eric Lambe was also not drafted, pitching for LeMoyne College. The college site has him as Erik Lambe, and evidently he didn't pitch much and wasn't very good. Nick Mutz story is different, as he was drafted by the Angels in the 9th round in 2011. He pitched well for Orem in the Pioneer League after being drafted, but was a disaster in 2012, with ERAs over 10 in both A-ball and the Arizona Rookie League. He only made 8 starts in 2013, all in the Pecos League, but maybe it is a sign he has things back on track. Unlike the previous two, there are a couple of videos of him available online, including one from him in college, and another from this year in the Pecos League.
Posted by Unknown at 4:07 PM