Asher Wojciechowski is a 24 year old right-handed pitcher in the Astros' AAA affiliate. Wojciechowski was acquired by the Astros in the ten player J.A. Happ trade before the 2012 trade deadline. In 2010, he was the 41st overall pick out of the draft by the Blue Jays. He began the 2013 season in AA, but was quickly promoted to the PCL, where he has a 4.30 SIERA and 4.14 kwERA (league average is 4.14 and 4.16 respectively) with a low groundball rate in 123 innings.

He has nice size (listed at 6-4), with broad shoulders to go along with it. He sure looks like a workhorse starter to me based on size. I don't neccessarily love the stop and go in his delivery, which you can see in GIF form here:

To get a centerfield camera look, this one I got from MiLB TV when he was with Corpus Christi (AA).

I also got a video look from the side (thanks to Daniel, my brother for doing the videos) to further look at his delivery:


This second one is a longer version:

If you don't want to watch the video or would just like a screenshot version (I know most people don't watch all the videos in prospect posts): 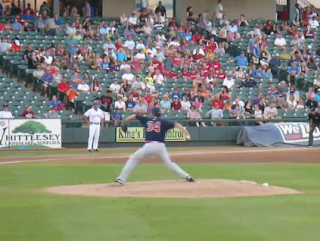 Asher takes a long strike, bringing the ball behind him as he brings his glove pretty straight forward. His arm seems pretty in sync with his whole body, coming forward as he finishes his stride. 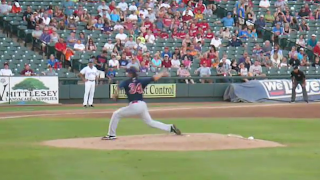 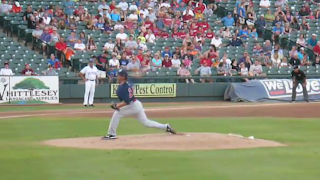 His landing point seems to be pretty standard and smooth as well. 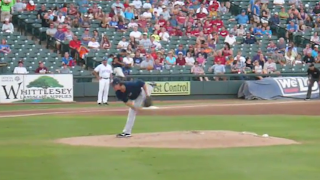 I watched him pitch against the Rangers' AAA affiliate, a team that is both slightly below PCL averages in age and runs per game, and early on Wojciechowski took advantage of passiveness on the part of the Round Rock hitters, getting a lot of called strikes (though he began the game by getting Jim Adduci to have a horrible whiff on the first at-bat with a fastball). The 2nd time around the order he got touched up pretty hard on pitches that stayed over the plate. His off-speed pitch got hit hard by Brendan Harris and Aaron Cunningham (to be fair, Cunningham showed off a good contact tool by being able to hit a pitch outside the strike zone for a hit) a couple of times, two players that have clearly failed at the Major League level (Cunningham had a -.8 oWAR in the Majors, and while Harris had some early success, he didn't have any MLB at-bats 2011-2012 and was just signed as a free agent by the Rangers). To his credit, he bounced back and had a nice outing by dominating the third time through the order.

I charted all the pitches in the entire game based on the velocities from the ballpark radar gun (which missed a few, and Wojciechowski's case, three). The only results I labelled was the at-bat ending result.
Wojciechowski sunk the ball and kept it low a lot, which explains a lot of the grounders. His first off-speed pitch was a wild pitch. He would do the same thing a couple more times, just not getting the ball to the plate. He caused Solarte to have a horrible swing on one of the slower breaking pitches.

His average pitch was 87.1 MPH, with an average fastball of about 89.6 MPH. He topped out at 92 MPH, and his off-speed averaged 79.9 MPH, in the 79-82 MPH range. All of his called strikeouts came on fastballs, as did his one swinging strikeout. The vast majority of his contact plays also came on fastballs as well. He threw fastballs about 74 % of the time, which would be one of the highest rates in the Major Leagues (only lower than Bartolo Colon if BIS tags are to be trusted). While I am not aware of any rules enforced by the Astros, there should always be some caution when looking at minor league pitch selection since sometimes pitchers are instructed to throw a certain percentage of one pitch.

While the size shouldn't be overlooked, there is nothing in either his numbers or his fastball that screams future successful big league starter. It looked like he was just using one off-speed pitch as well and it wasn't particularly devastating. With that said, he has solid fastball control, even though the off-speed pitch isn't quite there yet. As a big guy who can fill up the strike zone, he should have a spot on some Major League rosters, but I don't think he is an impact starting pitcher.
Posted by Unknown at 6:27 AM