George Springer has emerged as one of the best prospects in baseball this season, making a run at 40 steals (which he already has) and 40 homers (which he was three away from when I wrote this post) for the season. The 23 year old was drafted by the Houston Astros 11th overall out of the University of Connecticut in 2011 and was rated as the 37th best prospect in baseball to start the 2013 season by Baseball America. This year, he has been destroying both AA and AAA, with a wRC + of at least 175 at both levels.

First, here is some video of a Springer at-bat from my vantage point at a game Oklahoma City played against Round Rock.


He was pitched inside pretty effectively in the game. Even though he didn't see premium velocity, pitchers were able to get in on him. Springer also had some horrible whiffs where he came completely out of his swing on breaking balls. I thought he looked pretty flawed and even bad in all of his plate appearances but one.

His one good at-bat was his homer, where he used a hard quick upper cut swing and drove a low pitch, the only pitch in the at-bat, over the wall:

He would get under the ball and did hit an infield flyball (though infield pop-ups do not seem to be a problem for him this year, he is a pure fly-ball hitter, which makes a lot of sense considering his swing path). As his heat map shows (courtesy of MLBfarm), Springer is pretty much a dead pull hitter: 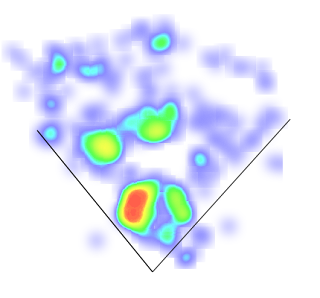 So you can see why he hits for power. He uses a combination of raw strength with an uppercut swing and a pull heavy approach. So the fact that he didn't always handle fastballs well and was pitched inside effectively in my short look at him is somewhat concerning. However, he has a much higher than league average P/PA, meaning he has been working the count this season, and if you trust GameDay stringers, has been swinging at less pitches than league average outside of the strike zone.

Springer really doesn't have home/road splits (and Oklahoma City is actually slightly pitcher friendly), so it is not as if he is doing all his damage in one park. He also doesn't have real platoon splits for his career, and they are non-existent in AAA this season. The power numbers he is putting up in the highest levels of minor league baseball are real, and it is coming with walks and a high average (though he does have a high strikeout rate).

The numbers are impressive, and I don't think you can poke holes in them in any way statistically. He is a very very good minor league player. He is also very athletic (as shown by the stolen bases), so he should be able to play the outfield well, even if he doesn't stick in center, where he has played the majority of games in his big leauge career. However, he isn't without his flaws at the plate. Because of this, I think he is less of a sure thing than his numbers suggest. The power/speed combo may be blinding enough to cause suspicions about how he looks at the plate to go away, but in the Majors, every mistake and flaw is magnified. Whether or not the rest of his game overcomes these flaws (or he fixes the flaws or the flaws happen to be exaggerated on my part because of a one game look) will determine whether or not he turns into a good Major League player.
Posted by Unknown at 6:16 AM