Edison Barrios made his Ichi-Gun NPB debut on Sunday August 18th, throwing five innings for the Softbank Hawks, with five strikeouts, one walk, and a homer allowed. Barrios is an extremely interesting story, as the 24 year old right-handed pitcher was signed by the Hawks out of the independent leagues in Japan. They signed him in July of 2011, but he only pitched 6 innings in Ni-Gun (the minors) in 2011 and 6 innings in 2012 before hurting his throwing elbow.

This year, he threw 19 innings in the Ni-Gun before being promoted, striking out 13 with 5 walks and no home runs allowed. Before his career in Japan, Barrios was in the Pirates system, pitching from 2006-2008 with their Venezuelan affiliate (they no longer have an affiliate in Venezuela). He was dominant over the 112 innings he pitched, striking out 65 and walking just 13, with an ERA of 1.69. It wasn't enough for the Pirates to bring him to the States though, and that was the end of his MLB affiliated career.

According to reports and his Yahoo player profile, he has the ability to throw to throw up to 92-93 MPH on his fastball. However, his release from the Pirates came when he failed a steroid test and was not told how he could appeal. This explains why he never reached the States despite good numbers and apparently good stuff.

Barrios didn't show that kind of stuff, at least not that kind of fastball, in his outing. I took all the Yahoo data from his outing, sorted by pitch number, with opposing hitter platoon, Yahoo's classifications, result, and velocity (I kept it in kilometers)

He topped out at about 90 MPH, and pitches labelled as 4-seamers were about 87.15 MPH on average. There was one 2-seamer tag ("shoot"), but there is a good chance that is a mistake. It is also unlikely that he throws a "fork" (probably a splitter) and a changeup, something that the tags insist, even though they were about the same velocity. His curve is on the slow side, but not extremely slow, averaging about 71.5 MPH. It didn't appear that he could throw it for a strike. He featured the slider more, almost exclusively against righties, averaging nearly 79 MPH with it. It is clearly not a power slider, and he only got one whiff with it, but he got some called strikes and foul balls with it. He threw the change/fork against both lefties and righties and it was a pitch with a higher risk and reward in the game, getting more whiffs, but also giving up the homer and a double.

The fastball seemed to be hittable, giving up four fly-ball outs, two ground-ball outs, and three hits versus two whiffs in 46 pitches. He got 8 whiffs in his 88 pitches, which isn't bad, especially since the NPB has about a 17% strikeout rate compared to the 19.7 strikeout rate in the Majors. So while I don't know for sure, it wouldn't be surprising to see the league average swinging strike rate at lower than 9%. Four of the eight whiffs actually came against lefties, on four different classifications: curve, straight, change, and fork (the last two are probably the same though). With right-handers, it was a similar story, with the four whiffs coming on a straight, fork, slider, and curve. So it doesn't appear that he has one plus pitch he can get hitters out with consistently, but the mix of pitches worked for him in that outing.

We do have to remember that the Fighters offense he was facing is not a very good one. They score runs about 94.5 % as much as (Pacific) league average, and have a 98.9 OPS +, so they are a below average NPB offense and Barrios was facing them for the first time. For these reasons, we should be careful reading too much positive into his outing statistically.

Barrios is listed (by the official NPB website) at 6 feet tall and about 180 pounds (he was listed at 151 pounds in Venezuela, but you would expect him to add weight). Unfortunately, I wasn't able to get high quality video of Barrios in his outing, but we have something to work with. The first is a video of an at-bat Takuya Nakashima against Barrios. Nakashima drives a 86 MPH fastball in the middle of the plate up the middle for a hit:


The next is an at-bat against Michael Abreu. This one shows more of his pitches to give you an idea of what they look like (and it shows his pick off move as well)

These three pictures attempt to get a look at what his release point looks like. The first one shows him starting to come forward with his arm 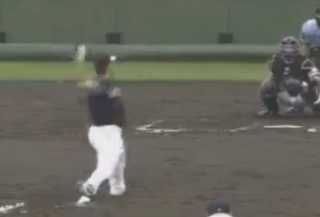 The next two photos attempt to show his approximate release point. They are at similar times, differing in quality and size (which is why I am including both) 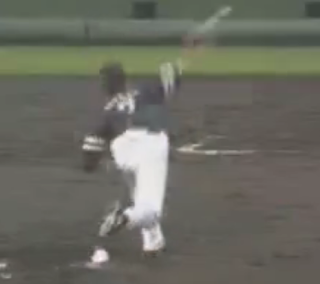 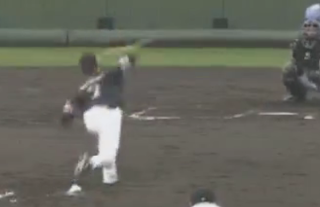 He comes with a high arm angle, and his body position seems to be pretty normal. They are pretty standard mechanics. Ideally, Barrios will gain his arm strength back from his injury and begin to throw in the 92-93 MPH range. When he does that, he will be interesting from an international perspective. Right now, with his current fastball and three off-speed pitches he can throw, I think he can be a successful, NPB pitcher, probably around the league average range. I think he is a name to watch if he gets the velocity back. If not, he should still be a useful pitcher for the Hawks, though pitchers with an injury history are extremely difficult to predict.
Posted by Unknown at 10:56 AM