Evaluating Josh Lindblom as a Starter

Josh Lindblom was acquired by the Texas Rangers from the Phillies in the Michael Young deal. A career reliever, the Rangers decided to convert him to a starter and stash him in AAA. So far, the change seems to be working reasonably well in Round Rock, as he has made 18 appearances, throwing 98 innings with a manageable home run rate of 1 per 9 innings, and a roughly league average kwERA of 4.13. Lindblom has also made 5 starts on the big league club in 8 appearances, with a 4.52 kwERA, somewhat struggling to miss bats. I saw him pitch against Oklahoma City, the Astros AAA affiliate, and you can see him and his delivery below:


Listed at 6-4, size is clearly not an impediment to him being an effective starter, and I think the slow and smooth delivery is pretty repeatable (walks have clearly not been a problem for him). He uses a pause when his leg comes to create some timing issues for hitters, not coming forward until it comes back down.

According to MLBAM pitch tags (the Brooks Baseball tags more or less agree with them), Lindblom has gone to more moving fastballs, curveballs, and changeups, throwing the 4-seamer 26.6 % of the time instead of over 50 % of the time. The BIS tags have him throwing any kind of fastball less than half the time with the Rangers' as a starter this season. For his outing that I saw live in Round Rock, I charted the velocity of each of his pitches, labelled with the opposing batter, pitch number, and the result of the at-bat.
As far as general observations from his outing itself, his 82 MPH slider seemed sort of flat looking. He often bounced the slow curve, and seemed to slow down his arm to throw it. I thought he became a lot more hittable late in the game, as the stuff wasn't overpowering even for a AAA game. Some of the slower fastballs had a little bit of cut or something to them, even though it doesn't appear that he throws a cutter.

His release point this year is closest to Bobby Parnell and Darrell Rasner (with the high leg kick and the slow curve, it has been hard for me to shake the idea that he reminds me of certain NPB pitchers, with Rasner, currently a reliever for the Rakuten Golden Eagles, showing up, that feeling isn't going away) as starters.  Here is a visual look at what his release point looks like and the average location of all the pitches he has thrown in the Majors this season:

This graph (which is just the strike zone) shows the average locations of his individual pitches in the Majors so far this year:

While the sinker (his 2-seamer according to MLBAM tags, I changed the name here to match what Brooks Baseball calls it), curve, and changeup locations make sense, I was really surprised to see him be such a heavy glove side pitcher with his 4-seamer. He also throws it very high in the zone despite not having good velocity. His slider also doesn't get down or get as glove side as you would like. By contrast, this is what his average locations look like broken down by results:

The homers are the most arm side and high, but are also some of the slowest pitches, not counting the swinging strikes, which he gets more glove side than anything else (suggesting the curve and slider are working). He gets fouls with the most velocity, when hitters can't catch up, and his outs come more glove side than his called strikes.

Lindblom is a pretty heavy groundball guy, getting more groundouts than strikeouts this season, and it appears that hitters are pretty balanced as to where they hit the ball against him (courtesy of MLBfarm) 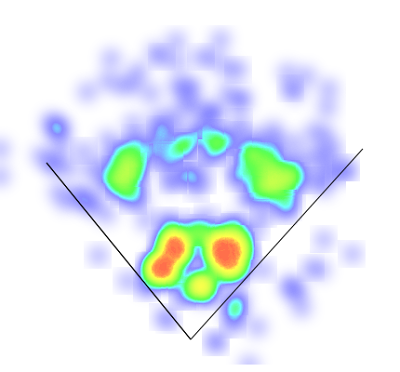 As a starter, I think Lindblom is going to have a hard time successfully navigating through MLB lineups. His fastball is below average, I am not a big fan of his slow curve, and his slider doesn't seem to be a very effective pitch. I don't think these pitches will amount to Lindblom missing any more bats than he already is.