Kim yoon-dong is a 20 year old pitching prospect for the KIA Tigers, currently in the Futures League of the KBO. A converted outfielder, Kim was awarded the Futures Game's most valuable pitcher. Unfortunately, the whole Futures Game was never posted online, but someone did post video from his outing, one of two videos I will use in this post to evaluate Kim.

Kim was picked in the 4th round of the KBO draft in 2012, but that was as an outfielder, which makes his draft position somewhat irrelevant. He is right-handed and listed at about 6 feet 1 inch and about 190 pounds. Though he has the decent size, his body type suggests that he probably does not have much room to get any bigger. Supposedly, he had power as an outfield prospect (which makes some sense considering his body), and I can't find the reason for the switch in position. At the very least, he should have plenty of athleticism on the mound that should help him with his defense and his delivery. His numbers in the Futures League have not been eye-popping, 3.37 BB/9IP, 5.56 K/9IP, and 3.07 ERA, but he has kept the ball in the park, giving up just two homers in 123 innings. He has gotten into one KBO game, but it didn't go well, walking two batters and giving up two runs in just five batters.

First, I wanted to use screenshots of the two (three really) different angles to walk through his delivery. Kim will start with a leg kick as we will see below, but he has a leg sweep afterwards, a sweep that has his body tilted towards the third base side of the plate slightly. 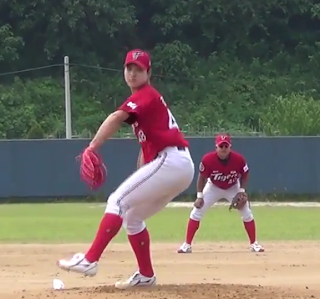 For the most part, he is still facing the plate, but his body is a little twisted going that way, giving him some deception, but with his head facing the right way enough that he probably isn't disrupting his timing too bad. 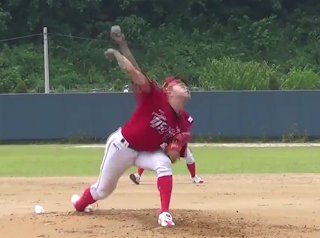 As he comes all the way forward, the body seems pretty straight, and while the head isn't at too much of an angle, it seems tilted up more than you would expect. It also seems that he has some arm drag, not really in sync with where his body is at. 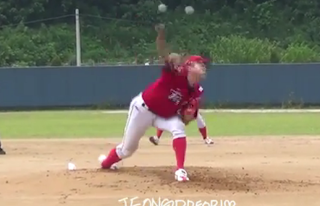 The follow through looks pretty good to me. His body has come forward, he has tucked his glove under him so it isn't going an opposite way of his body, and he seems to have a solid stride.

From a slightly different angle, we can see what his leg kick looks like, a very traditional kick and pause, nothing out of the ordinary. 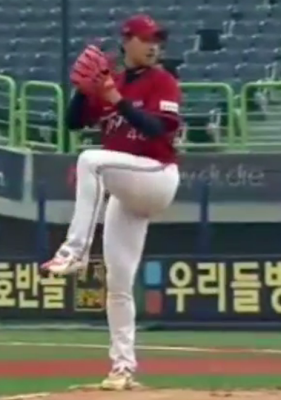 Here is another look at his leg sweep, this time showing more of a lean back. It also shows how much he hides the ball behind his body. 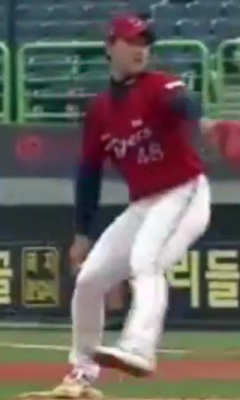 This picture is probably the most awkward one out of all the screenshots, as he twists his arm back along with his body towards third base. This isn't completely unusual, as I've seen pitchers in the Majors do this. This still seems to be all about deception from this point. Also note that he is working on the extreme third base side of the rubber. 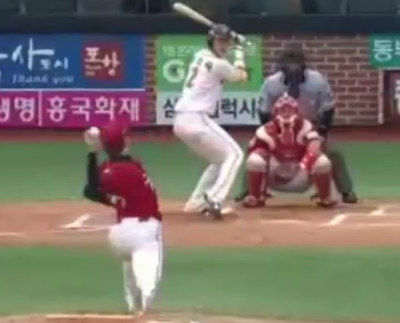 This is what Kim's release point looks like from the side. I think this shows that he has lined himself back up straight. He isn't crossfiring in his delivery, this is very traditional and normal. 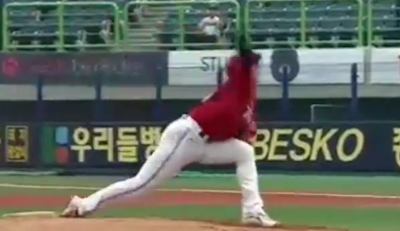 What you can see in the above photo, that I think is even better illustrated by the below two screenshots, is that his posture is not ideal. His back is clearly not straight, and he is coming off the mound a little bit, which could cause him to miss glove side. 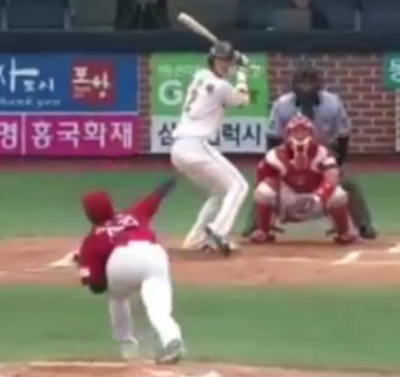 I think this one is taken a slightly better time (just before the one right above), but it illustrates the same point. He is stepping hard to the left, and while his head is in a good position, his arm is dragging behind his body. 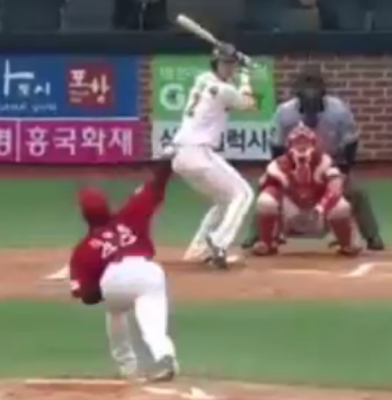 When taking a look at his pitches, the big thing I watched for was why he was lacking strikeouts in the Futures League. Overall, the stuff I saw works just fine in the KBO:

He still threw the fastball up trying to get whiffs, so it wasn't like he was throwing sinkers down in the zone trying to get contact. The command of the off-speed pitches was predictably poor, but he showed some good arm side action on the changeup.

Perhaps the strikeouts will come as the command improves. He has been a full time pitcher for about a year, so one would expect serious progression. It should be noted just how advanced he is considering his experience. With mechanical tweaks (not an overhaul, since he doesn't need one), I think Kim should start missing bats. There is no real reason why he shouldn't. I think he is a good KBO prospect, and depending on whether the velocity holds on increases, could be an above average pitcher in the league.