In previous posts, I looked at the Pitch F/X data from the WBC of Kenta Maeda, followed by Tadashi Settsu and Atsushi Nohmi. In this post, I will look at the other three NPB pitchers that pitched in their game against Puerto Rico.

Yamaguchi is a lefty with okay velocity, getting up to 90.8 MPH, averaging 89.41 in his outing. This is right about where he has been in Japan. Since he is a reliever in Japan, this is his normal velocity, he isn't getting an artificial boost by being able to ramp up more than he usually does. The slider and changeup velocity were also on point as well.

His fastballs get a low rate of spin compared to other fastballs, while the sliders get a high rate of spin compared to other sliders (I am not sure why the MLBAM tags separated one of his fastballs to just a fastball). The manual tags change 3 of the fastballs to sinkers, which makes sense considering he also has that in his bag of tricks in Japan according to NPB Tracker (he has went to a lot more moving fastballs over the past year if the data is correct). However, it is really difficult to pick them up based on spin: 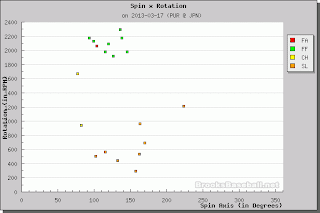 This may explain why he was throwing mainly gloveside, with both his slider and fastball: 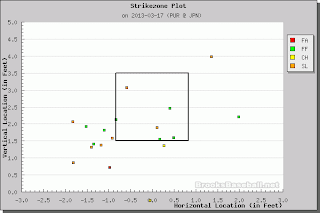 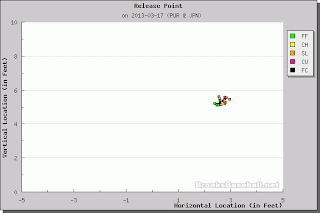 You can see why one was called a cutter, as it clearly moved (and spun. His overall spin chart is really weird, with the slider spinning a ton, and the fastball not spinning at all, and the curve spinning more than you would expect) a little, though not significantly different, than the other sliders: 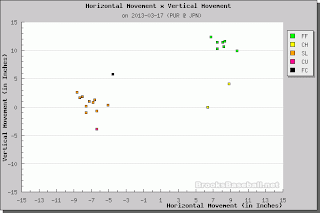 Just by velocity, it would be the slowest cutter (compared to relievers) in the Pitch F/X era. It also has more horizontal movement than cutters, and well above average vertical movement as a cutter. As a slider, it is still slow, but makes much more sense when it comes to movement. I think it is just a misclassified slider that he threw a little bit differently. This means 11 of his 21 pitches were sliders, an extremely high amount, though there is an occasional reliever that does this, percentage of sliders. His percentages aren't that high in Japan, but according to NPB Tracker, he did throw a lot more in 2012, up to nearly 38%. It is an extreme horizontal, very little vertical movement slider.

His velocity got all the way down to 86 MPH on average as a starter last season. In the WBC, he maxed out at 87.3 MPH, and averaged 86.59. So it doesn't seem that, even though he was in relief in this outing, that he was adding much velocity. This could just be him not wanting to overthrow, or he could be losing even more velocity.

With that low of velocity, and that release point, it is obvious that getting lefties out is going to be a big problem. He is going to have to try to fool righties, and you would think throw a lot of changeups. He threw just 2 changes, but as you can tell with the following chart, he kept them away: 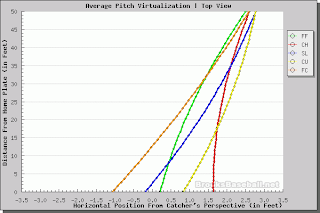 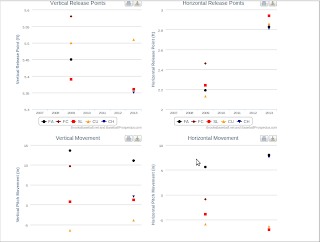 He just isn't the same guy.

Here is a low and out right-hander with a consistent release point. He has a little more traditional spin rates compared to other MLB pitcher. He also has what is closer to MLB velocity. His fastball averaged 90.33 MPH, and got up to 91.5 MPH. This is obviously well below MLB average for right-handed pitchers, but it is a better starting point, and better velocity than we have been seeing from the NPB pitchers in the WBC data.

His two off-speed pitchers were a change and a slider, both thrown at MLB type speeds. The change gets above average vertical movement, and the horizontal movement is really good. He only threw one, and it got similar break to the fastball, and it it looks sort of like the fastball from above, so there is a chance that it was just a slow fastball: 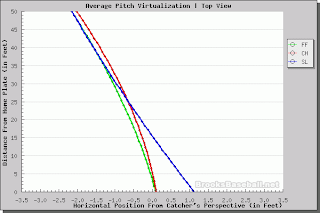 Wakui is usually a reliever, so the velocity rates should be about the same. However his fastball is up about a tick, and he usually throws his changeup at 81 MPH (which is actually the big boost it saw in 2012 from previous years). Since his changeup was thrown around 85 MPH, it was probably just a bad fastball.

Wakui's slider gets good movement both ways according to Pitch F/X, and was also slightly harder than what he threw in the NPB in 2012. Wakui saw the uptick in velocity from 2011 to 2012 thanks to his move to the 'pen (he was a starter from 2007-2011, throwing nearly 1000 innings before his 26th birthday). It is probably not smart to take too much from the data we have as to why he had better velocity in the WBC than in 2012. He is 26, and could be just getting better (this is unlikely), he could have more a rejuvenated arm because of the time on the calender, or the move to the 'pen, or he could have just been amped up from what he saw as an important game. There is no reason to question the Pitch F/X gun in San Francisco, or the NPB Tracker data, as every time I have looked at the latter, it has been right on point. It may be something to watch though in 2013. Wakui also throws a forkball, a moving fastball, and a slow curve, but we didn't see any of those pitches in the WBC.
Posted by Unknown at 6:35 PM