I've been really fascinated by Mark Hendrickson's reinvention of himself. Hendrickson is a former NBA player that had a long (if rather poor) MLB career as a reliever as well. However, he has now come back with the Orioles as a 38 year old sidearmer.

Here is a picture of him pitching in Spring Training from one of the Orioles beat writers: 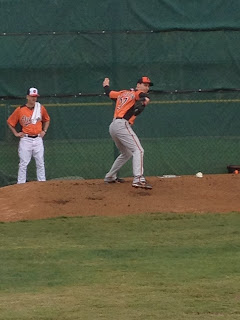 Everything just seems really simple in Hendrickson's new delivery. It is a repeatable delivery, which is important for his size. It is still a high release point, but he is coming out quite a bit. His plan against righties was just to sort of pitch around them, trying to throw changeups and throwing inside with fastballs. He isn't going to fool them, and probably won't get many out.

I had seen him a couple of times this spring training, but not with a broadcast radar gun (and the Florida spring training facilities do not have Pitch F/X), so Wednesday night was the first time I got a good look at his velocity. I put all the pitch velocities (according to the MASN gun, which looked accurate on known pitchers) in a spreadsheet, and here is how they broke down (with MLB comparisons in the Pitch F/X era):

When you look at Hendrickson's old pitch data, we basically see the same guy, with velocity down a tick or two. Since he took time off, we would sort of expect that anyway.

Almost everything was thrown glove side, that is, outside to lefties. According to his old Pitch F/X data, he wasn't a guy that threw down and away a lot, he would either go arm side and low, or high and glove side. This is where we see the new release point most likely impacting his pitching philosophy. It is hard to see him going up and in a lot to righties or up and away from lefties just because of the release point.

Is he a MLB reliever at this point? Maybe as a lefty specialist if he can throw strikes, and there is nothing I've seen in Spring Training that tells me he can't.
Posted by Unknown at 10:13 AM