After looking at Kenta Maeda, in this post I will look at two other NPB pitchers that pitched in the WBC using Pitch F/X data.

Tadashi Settsu has had quite of bit of success in Japan, with a 3.39 kwERA in 4 seasons. He started out as a reliever in his first two years, and after absolutely dominating, was made a starter, in which he has not really lost much statistically.

There are tons of pitch classification problems in his short WBC outing. Despite this, the fastball velocity is roughly the same, around 86.5 MPH, according to all 3 different tags. Obviously this alone, especially as a right-hander, makes him almost automatically a non-MLB prospect.

Weirdly, the MLBAM tags labelled his hardest pitch (a whopping 87.6 MPH) as a changeup. It seems best to ignore the classifications, and just work with the pitches themselves. The average pitch he threw was 80.13 MPH, which would be in the bottom of 6% of MLB starters. He is pretty close to Koji Uehara when he started games, as well as Josh Banks (who was horrible in the Majors).

Settsu got really good spin on three pitches, way more of the rest of the pitches. They were all classified as changeups, and they were thrown 80-81 MPH.This classification makes sense, and were probably the only 3 changeups he threw, which makes it seem like the manual tags are correct. The slow curves also got less spin than his harder curve, so it makes sense to distinguish the curveballs based on both velocity and the harder curve.

The average movement on his pitches was -1.92 inches horizontally, and 1.50 vertically. This overall movement is actually really similar to Tim Hudson, but Hudson throws about 5 MPH harder on average. Trevor Bauer and Justin Germano, are both similar, with Germano having similar overall velocity. Germano is sort of convenient of a comparison, as he has pitched some in the Majors, but not very successfully, and has pitched in Japan and Korea. 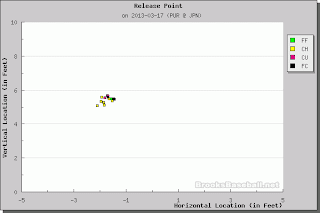 Of course, his arm action is really complicated (video here), so it is amazing he can throw strikes at all, and doesn't have to have elbow surgery after every pitch. At 5-11, it is also amazing he has the durability to throw over 190 innings like he did in 2012, and obviously explains his vertical release point.

Nohmi (or Nomi) is a little older at 33, but has also been successful in the NPB, mainly as a starter, with a 3.53 kwERA.

The lefty's classifications are a little more clear, or at least you can distiguish his fastball from everything else. He maxed out at 90.6, but his fastball averaged 89.68 MPH. This is much better fastball velocity than he has shown in Japan (averaging 86.54 MPH in 2012), most likely because he was pitching in a short relief role and was able to max out more. He threw 11 of the 13 fastballs for strikes.

His breaking/off-speed pitches are pretty soft velocity wise. The biggest classification differences between the manual tags and MLBAM is the changeup. Weirdly, all 21 pitches he threw were to righties (when he didn't have the platoon advantage), so it is hard to look at usage to help. There is a good chance that the "2-seam fastball", which is about 10 MPH slower according to the MLBAM tags, is actually the forkball, a pitch which Nohmi has used about 20% of the time in the past, and 10 % of the time in 2012. He also seems to have added an occasional cutter, at least according to his NPB Tracker data. The manual tags combine the "2-seam fastball" into a changeup. From best I can tell, the change and "2-seamer" get the same speed and rotation, but the "2-seam fastball" is just about 5 MPH harder. I think they are definitely different pitches, and "forkball" probably makes sense (even though there isn't a real Pitch F/X tag) than calling it a 2-seamer (and it is probably not the cutter based on usage).

Nohmi has a much more consistent release point than Settsu, and it is really similar to Chris Capuano. Jason Vargas is sort of similar, but Oliver Perez might be the best comparison. The Capuano and Vargas comparisons make sense when it comes to velocity, while the Perez comparison doesn't. However, these are all guys that have pretty heavy platoon splits.

The horizontal movement on everything (except for one pitch, the slider), is really similar. 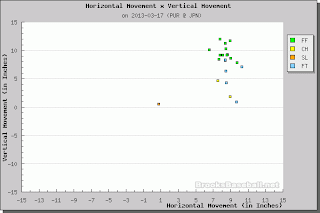 Nohmi is more of a MLB prospect than Settsu, but mainly as a left-handed specialist. This is because the release point screams platoon splits, and he is able to ramp up his fastball to a respectable rate out of the 'pen, while his starting fastball velocity (using the NPB tags) doesn't seem to point to a successful starter. My guess is that salary problems would make this impossible, making him a non prospect in the context of the MLB (though as he gets older, perhaps he will take a minor league contract as a free agent if he really just wants a chance at pitching in the big leagues. Whether or not this is a goal for him, or if he just happy being a very successful pitcher in Japan, is unknown).

There were three more NPB pitchers that pitched in San Francisco for the WBC, and I will look at their Pitch F/X data in a later (but hopefully not too much later) post.
Posted by Unknown at 4:05 PM