The Texas Rangers' have been looking for a second lefty in the bullpen (now that Robbie Ross is in the bullpen again), and since Michael Kirkman is in the competition for the 5th starter, I wanted to compare two lefties that seem to have some chance of making the team as spring training, Joe Ortiz, who is on the 40 man roster, and Nate Robertson is not. So in this post I will look at the Pitch F/X data of both from this spring training.

I saw Ortiz pitch in person last season, and was impressed (I've seen both pitch on television this spring training, but I'll put that aside for now and just focus on the data). He looked like a future big leaguer to me as a reliever. Both Robertson and Ortiz are really quirky pitchers. Ortiz is extremely short for a pitcher, while Robertson has been reinventing himself as a sidearmer after having some success (but injuries) as a traditional starting pitcher.

First let's compare their fastballs, which seems like a good place to start when talking about pitchers:

They both also throw sinkers. Ortiz throws his at the same velocity as his 4-seamer, while Robertson takes quite a bit off of his, throwing it 86.75 MPH. Robertson gets slightly more horizontal movement on his than Ortiz', while Ortiz gets better vertical movement. 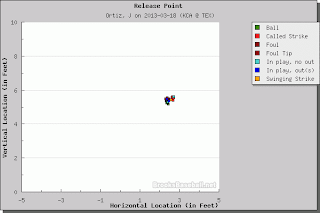 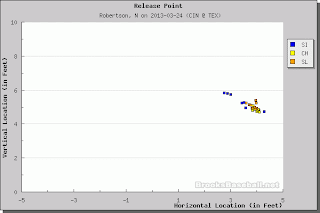 Obviously Robertson released some sinkers much differently than the rest of his pitches. I wasn't sure if this was some kind of error (we have seen weird release point errors with Kameron Loe) or something he just did in my outing. When I looked at other games from this spring training, he did the same thing. So he releases some pitches way differently. It would seem that this would be on purpose. Can we find the situation? It didn't seem to be based on splits, as they (the stray marks) appeared against both lefties and righties. It didn't appear to be on two strikes, and it wasn't all of his sinkers, and there appears to be at least one fastball he released strangely.

What does it mean? It isn't exactly clear. Inconsistencies are usually bad, mainly for health reasons. It would also seem that he is doing some kind of pitch tipping, though again, it isn't all of his sinkers.

I promised comparisons. We see that both pitchers are releasing the ball from basically the same height (5.48 feet on Ortiz' fastballs, and about 5.35 on average for Robertson, who I added up all the pitches because of the difference), with Robertson a little lower. Obviously Robertson is releasing the ball sidearm, but Ortiz is mainly just short (though he is coming out quite a bit, about 2.7 feet on average). This is the biggest difference, as Robertson is releasing the ball much further out than Ortiz. This will make him tougher against lefties, though much less likely to be able to get righties out.

Both look like left-handed specialists. So I created this nifty little chart comparing the 2013 movement data for Ortiz and Robertson's spring training versus the movement data (career wise) of some other notable (my definition) "LOOGYs" in the Pitch F/X era. 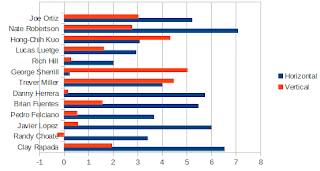 This is average movement per pitch regardless of classification. What we see is that Robertson is getting a silly amount of horizontal movement on his pitches, which is probably because of his release point (note that Rapada, a noted sidearmer, is 2nd). Ortiz gets slightly better vertical movement, which makes sense considering that we saw that his release point was a little higher (I have no idea what is going on with Randy Choate). Out of the 6 or 7 pitchers that you might consider "active", Ortiz has the best vertical movement.

One of the things that make comparing Robertson and Ortiz interesting is that they throw the same 4 pitches according the the Brooks Baseball tags, Fastball, Sinker, Slider, and Changeup. I hate to make too much out of pitch selection with such small sample sizes, and in games that don't officially matter, but Robertson seems to like his change more than his slider, and Ortiz is vice versa. Not surprisingly, Ortiz throws his slider harder than Robertson, while Robertson throws his change harder than Ortiz (by just .03 MPH). This makes the pitch selection make more sense.

Ortiz gets some pretty odd movement on his slider, seemingly very similar to Raul Valdes, who throws his nearly 5 MPH softer. Valdes is another short lefty, though not quite as short, and the MLBAM tags call his slider a curveball. However, when you look at spin graphs, Valdes is clearly not throwing a curveball: 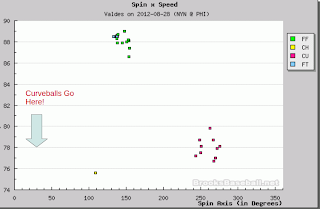 When we look at Ortiz, we see the same thing: 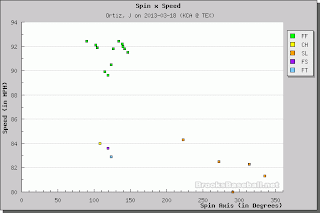 It doesn't have traditional movement (that is, it has what you might call "top spin") for a slider, but it definitely has too much spin for a curveball. Sean Burnett's slider is pretty similar as well (and both Valdes and Burnett have good whiff, average groundball sliders), and we find a few right-handed ones like Strop, Jansen, Albuquerque, and Esmil Rogers as well (and Fu-Te Ni had a curveball that was similar in movement). These are mostly good names, but it is sort of an odd pitch.

Even without taking into account age or roster status, Ortiz seems to be the better pitcher. His pitches are thrown a little harder on average, and he seems to be less of a trick pitcher. Robertson seems to rely too heavily on throwing pitches with extreme horizontal movement with his way out arm slot to be anything more than a one batter specialist. He will be tough on lefties, throwing with decent velocity and an array of pitches from the side, but he isn't as balanced as Ortiz. Ortiz has strangeness as well, but a balance of pitches, a repeatable release point, ability to throw strikes, okay velocity, and good movement makes it look like he is the kind of guy that can pitch in the big leagues for quite a while as long as his body holds up (he is short, but he is not small).
Posted by Unknown at 4:47 PM