Donnie Joseph is a 25 year old left-handed reliever (no starts in the minors) that was originally drafted in the 3rd round in 2009 by the Reds. He has a career 2.92 kwERA in the minors, and was traded to the Kansas City Royals in the Jonathan Broxton trade.

Joseph actually has spring training Pitch F/X data going back to 2010, despite never pitching in a MLB game. His best fastball velocity was in 2012, when it was 92.77 MPH on average. This year in spring training, he is back down to where he was in 2010, at 89.60 MPH. The pitches per appearance is roughly the same, so the velocity differences are really strange, and make him hard to evaluate. Not quite 93 MPH is below average out of the bullpen, but it is significantly different (better) than shy of 90 MPH on average. We have just one outing in 2010, and just one outing in 2012, but they were measured at the same park (the Mariners/Padres facility).

We see quite a bit of difference in delivery for those two outings (sorry for the weird formatting):

That is a really drastic difference. Of course, it was a 2 year difference, and Joseph was coming off a sub-par year (especially compared to his stellar 2010), so some delivery tweaks, even drastic ones, isn't that surprising (I am sure that if we had access to minor league data, we would see similar tweaks in many pitchers). Ironically, he was throwing harder out of the more inconsistent delivery (though his 2010 delivery wasn't a great model of consistency). He also was probably just feeling out a new delivery (assuming all of this was intentional). Since there was no real height difference, it could have just been him moving on the rubber instead of actually releasing the ball closer to his body. We see a huge difference in horizontal break from the two outings as well. We also see a difference in what looks like a plan or just an angle. Compare the top view Pitch Trajectories and the strike zone locations. Here is Joseph from 2010:

As you can see, he was coming more out, and he was clearly focused on moving the ball glove side, into righties, away from lefties. How about when he was more straight up in 2012? 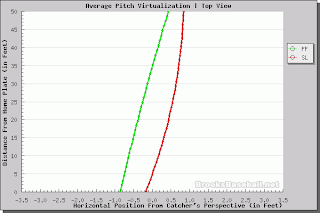 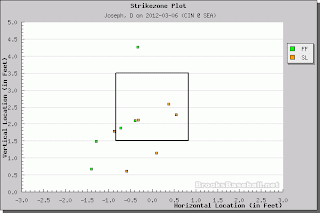 This is small sample size, but he seems to not have that cross tilt, and seems to be working more just generally low than glove side. How about in 2013? We actually see that he is further out than he has ever been before, as this comparison chart shows 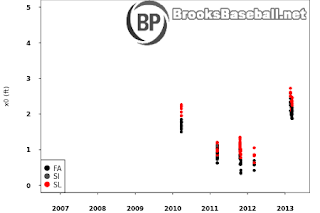 This seems really bizarre. Why would he move, not only back out, but more out than he was previously? Again, we don't see a difference in vertical height, so he is not becoming strictly sidearm, but it does seem like it has something to do with his velocity, when he is more out, he throws softer, when he is closer to the center, he throws harder. His slider, at least in his 2013 outings, has lost a dramatic amount of movement both vertically and horizontally, and over 2 MPH of velocity. He is also getting less overall spin on his pitches as well. I am not sure why he keeps changing his delivery, but he is clearly a worse pitcher than he was in 2012 according to the data.