Michael Roth just turned 23 last month, and we also got Pitch F/X data on him for the first time. In the context of college baseball pitchers, Roth goes down as one of the greatest of all time. His outings, including those in huge College World Series games, will go down in history as some of the best performances of all time. College numbers aren't predictive for pitchers, but, he had a 1.91 ERA and 3.05 FIP in his 4 year career at South Carolina. Of course, numbers don't neccessarily make a prospect, and this is the case with Roth.

When talking about Roth, I am reminded of an ESPN segment with Keith Law and Ben Mcdonald, in which they discussed Roth's above average command as a college pitcher, but the fact that, because of his lack of a fastball and big league stuff, he wasn't a big league prospect. He was drafted in the 9th round by the Angels anyway, but I saw him, just from seeing him pitch in college, as more of a left-handed specialist reliever. Pitching in the Pioneer League after the draft, the sample sizes were much to small to speak intelligibly about him at all, much less his splits. He faced 99 hitters, got 34 of them to hit ground-balls, 21 of them to strikeout, walked 11, and gave up two homers.

His 5 fastballs that Pitch F/X tracked averaged 91.45 MPH, respectable, even when we understand it in context. It was a relief outing, but is still a slightly above average fastball from the left side in relief, closest to Dan Meyer, who last pitched in the big leagues in 2010.

Roth's release point is rather low and somewhat out (which supports my initial thesis that he is a left-handed specialist), as you can see here:

However, it isn't as out or as sidearm as a Chris Sale or Randy Choate 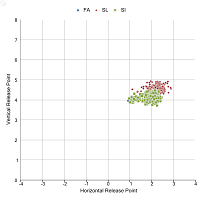 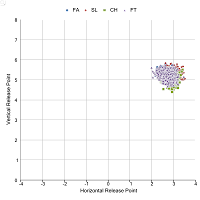 Those two pitchers have extreme platoon splits (even though Sale is a starter who just got an extension), and it seems Roth is more "normal" or standard than them. I compared Roth to Meyer earlier, and as we see with Meyer's release point, the horizontal release is basically the same, perhaps even a little more out, though Meyer clearly releases the ball higher.

Meyer didn't have much success in his MLB career, and his platoon splits were pretty weird. OPS wise, he was better against righties, but his DIPs were borderline acceptable against lefties, and horrible against righties. Meyer was basically a fastball/cutter pitcher, but he also threw a changeup 14 % of the time. Meyer's change was nearly 5 MPH slower than Roth's, and while it got better horizontal movement, the vertical movement Roth gets is much better. Meyer's change was terrible, with a 138 wRC + against. Meyer's 4-seam fastball also moved better than Roth's did in his outing, and Meyer's fastball was even worse than his changeup in the Majors.

The closest comparison I could find in release point to Roth is Craig Breslow. It is also a convenient comparison when it comes to fastball velocity as well (though Breslow's movement is a lot better). At the risk of having too many pictures, here is a release point graph from a recent Breslow outing: 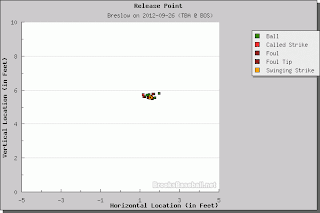 Even though Breslow doesn't throw a great deal of strikes (61.7 %), he has had a relatively successful career, especially if you believe his ability to outperform his FIP with low BABIPs is real (strangely, he had a high BABIP in 2011 in his last year in Oakland, but he had a lower than league average BABIP in 2012 with the Diamondbacks and Red Sox, two relatively hitter friendly parks). For his career, his BABIP and batting average has been virtually the same when it comes to lefties and righties, though his defensive independent metrics are stronger against lefties (but he is still acceptable against righties). So this release point doesn't seem to constrain Roth, even with his fastball, to being a left-handed specialist as a more extreme one might.

Roth's horizontal movement on his fastball is well below average, as is his vertical movement. It is going to take some really special command to make up for this, and even then, big league hitters can still take advantage of below average pitches that are well located. I count 21 relievers in the Pitch F/X era with fastballs of 91-91.99 MPH, and 20 of those pitches have better vertical movement on their fastballs than Roth's.

Roth's changeup is a little more interesting, especially in velocity terms. Averaging nearly 85 MPH, it is a pretty hard changeup, with only 5 relief lefties having a harder change than 85 MPH in the Pitch F/X era. He doesn't get a lot of horizontal movement on it, but it does get vertical dip. His closest comparisons are not that attractive in either grounders or whiffs, but one could picture this being a big league pitch and help him keep his platoon splits down.

Obviously we didn't see a third pitch, which isn't that big of a deal for our purposes, since I don't see him as a starter anyway.

I am not sure what to make of his lack of spin:

Most pitchers' fastballs usually sit around 250 degrees, and spin is usually good on fastballs.

This is obviously a small amount of data, and early spring training data, which is what this is, may be taken with a grain of salt if necessary. However, we can look at the data and allow us to make some conclusions on Roth until more data becomes available. The fastball is underwhelming for different reasons than I initially believed, he can succeed with his release point, and his change may actually be a good pitch. Lack of overall movement hurts Roth's chances, especially as an older prospect who needs to move very quickly. It would seem wise for the Angels to try to fast track him by moving him to the bullpen for 2013, and see if the fastball is good enough to get middle to high level minor leaguers out. If not, then he is probably just a minor league filler player. Just because of the pedigree, you can see why the Angels would take him in the 9th round, but because of his fastball, he comes with a lot of risk.
Posted by Unknown at 3:56 PM