Hong Seong-Yong is a 26 years old 5-11, 176 pounds LHP that won a Korean pitcher reality show and a contract with the NC Dinos this month. Hong was a 5th round pick by the LG Twins in 2005, but it doesn't appear that he ever pitched for them. Since 2009, has been in the Japanese independent leagues (pitching at least recently for the 06 Bulls of the Kansai Independent League), where it is hard to find stats (but evidently he did have good numbers), though  Baseball in Korea helped find me some video of his time there. First, let's take a look at his delivery from the show:

The leg kick and turn is more dramatic looking from the front. It is obvious that he turns his hip slightly away from the hitter, while keeping the top half of his body facing the hitter. The head has a lot of movement in the delivery, especially when he was with in Japan. He seems to have cleaned up a lot of it now, and especially at the moment of release, his head is in a pretty good position: 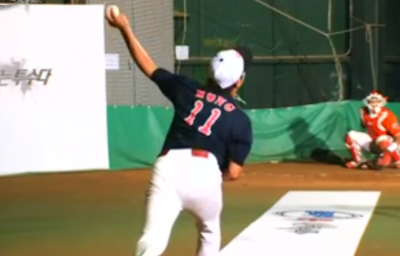 His posture is relatively good, and he uses a high 3/4ths arm angle that seems pretty traditional. He doesn't seem to have a large stride, which keeps him upright. There seems to be somewhat of an arm sling, perhaps a motion that is a little more violent than normal.

Hong features two pitches (I saw what looked like a slider in some video of him, but it didn't have great break and it wasn't used a lot. He also might have a curve). His fastball sat about 86-87 MPH on the show, and in Japan it appeared he could get it glove side, pitching away from fellow lefties, and worked high with it.

His main off-speed weapon is his splitter at 72 MPH. This is the grip he showed on the reality show: 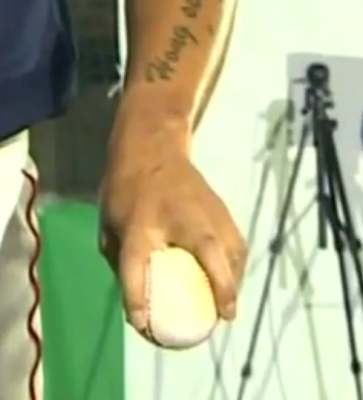 It does break like a splitter, but this grip doesn't seem to be as wide as most splitter grips I have seen where the fingers are obviously outside of the seams. This may just be because of hand size. Hong is not a big person, so he may not have hands large enough to grip the splitter as wide as other pitchers. This isn't a great camera angle, but this video from the independent leagues does give you an idea of how it breaks:

It has some decent drop, but the main concern is that the pitch isn't very hard, again maybe because of hand size and grip.

Whether or not he will be able to get KBO batters out or not will depend on the splitter. I am especially interested in how the pitch will play against left-handed batters since it is normally a opposite-handed batter pitch. Will the pitch have enough speed and deception to get misses, even when he hangs it? While his delivery seems mostly fine, it is hard to tell what his control will be like, and without plus stuff, it will need to be really good to get hitters out.
Posted by Unknown at 7:46 AM